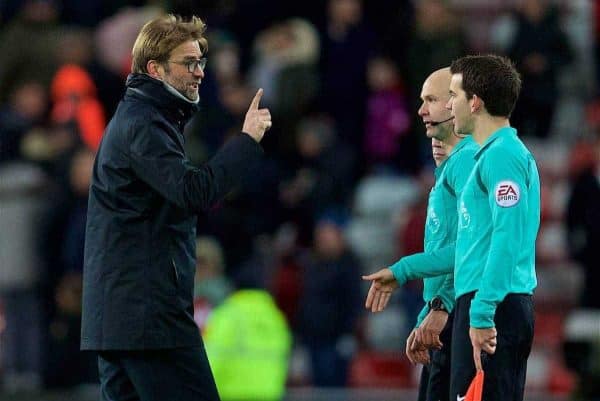 Is It Time For Video Technology In The Premier League?

Should football embrace video technology to avoid mistakes which cost a team points or a manager their job?

The game between West Ham and Man United this week produced two very questionable decisions which affected the outcome of the game.

Much maligned ‘celebrity’ referee Mike Dean was the centre of attention during the match (even though one bad call was down to his linesman), but many referees would have made similar decisions, perhaps not as flamboyantly as Dean.

In real time, these calls are difficult to make. Those taking in a game at the stadium, including the referees, don’t have access to TV replays, but the millions around the world who did were able to see instantly that the two key decisions in this game could have been overturned.

This has led to renewed calls for video technology being introduced during matches in order to help the referees and linesmen for whom it’s impossible to get everything right.

When Sofiane Feghouli leapt with two feet in the air towards the ball and the incoming Phil Jones, it could be said that the player was already risking a red card. Though he was completely off the ground, when he landed his studs were down and he was leading with one foot, not two, and a yellow card was probably the right decision.

The nature of the leap from Feghouli and the squirming reaction of Jones and his team-mates, who called for a stretcher as if limbs had been broken, made this look like a red card at pitch level in real time.

The next incorrect decision was more clear cut. Not one but three Man United players were offside as Zlatan Ibrahimovic scored his side’s second goal which made sure of the three points.

The linesman may have been unsighted by the amount of players running back from offside positions, and with the Swedish striker lurking rather than running it was difficult to keep an eye on several runs as well as the player with the ball.

On this occasion the lineman needed help, and a video replay here would have confirmed within seconds that players were offside and the goal should have been disallowed.

There’s plenty of technology out there to make clear cut offside errors like this a thing of the past, and the extra time it adds to the game would be minimal.

The line-calling technology used in cricket and tennis could come into play here, and ruling an offside line would be much less complicated than judging the line of a tennis or cricket ball.

Speaking of lines, the problem with using video technology is knowing where to draw it.

If the video referee determines that Feghouli’s challenge is not a red card, but also thinks that there may be a case for sending Jones off, does he have the power to not only reverse a decision, but also add his own take on the incident?

In isolation, Jones’s lunge was similar to the challenge for which Simon Francis saw red against Arsenal in the same round of fixtures but, when also placed in isolation, was Feghouli’s any different to these two?

The letter of the law says that a player should be sent off for serious foul play, and even though the FA overturned the decision many will argue that Feghouli’s challenge fits the following description:

“Any player who lunges at an opponent in challenging for the ball from the front, from the side or from behind using one or both legs, with excessive force and endangering the safety of an opponent is guilty of serious foul play.”

There wasn’t the outrage at the Francis red card which there was at Feghouli’s, even though the Bournemouth player’s tackle was more controlled, contained less excessive force, and was less of a lunge.

Both West Ham and Bournemouth have appealed the respective decisions, and the way the FA deals with these appeals after watching video replays isn’t a very good advert for them!

Returning to the offside, there would be no problem ruling that Ibrahimovic was offside and the goal shouldn’t have stood. But what if he was onside and the other United players were deemed to be interfering with play.

Determining whether a player is “interfering with play” or “gaining an advantage” in an offside position, will never be a clear cut call.

This is where there will be problems with video technology, as decisions will still be disputed.

With goal line technology the decisions made by the technology are not open to interpretation. Either all of the ball crossed the line, or it didn’t.

With dangerous tackles and things like hand ball and offside, the rules are interpreted differently by different people, and the arguments around decisions will remain.

Another thing which video technology takes from the game is that moment of elation when a goal is scored. Hanging around to see whether a goal is given or not could lessen the outpouring of joy seen in football grounds when the ball hits the back of the net.

Football of the association kind is a game where the rarity of the points scored makes them all the more pleasing when they are. Waiting around, even for a few extra seconds, while a video referee makes a decision could quell goal celebrations from both fans and players.

Advocates of video technology will point to rugby as a success story, but ask any rugby league fan and they’ll tell you that their video referee system is far from perfect and can cause as much controversy as it prevents.

If video technology is brought into the game the rules surrounding its usage need to be watertight and not open to interpretation as some of the laws of the game seem to be.

The technology will only be useful if used correctly and for decisions where there is a clear yes or no answer. If there is doubt, then the call could be returned to the original decision referees on the field.

Technological advances beyond deciding whether a ball has crossed the line must surely be needed in a game where unbelievable amounts of money are at stake, and in extreme cases managers’ jobs can rest on a few key decisions in matches.

The capacity to do it has been there for so long that there must surely be enough research to produce effective methods to prevent the many clear incorrect decisions football fans see every week.