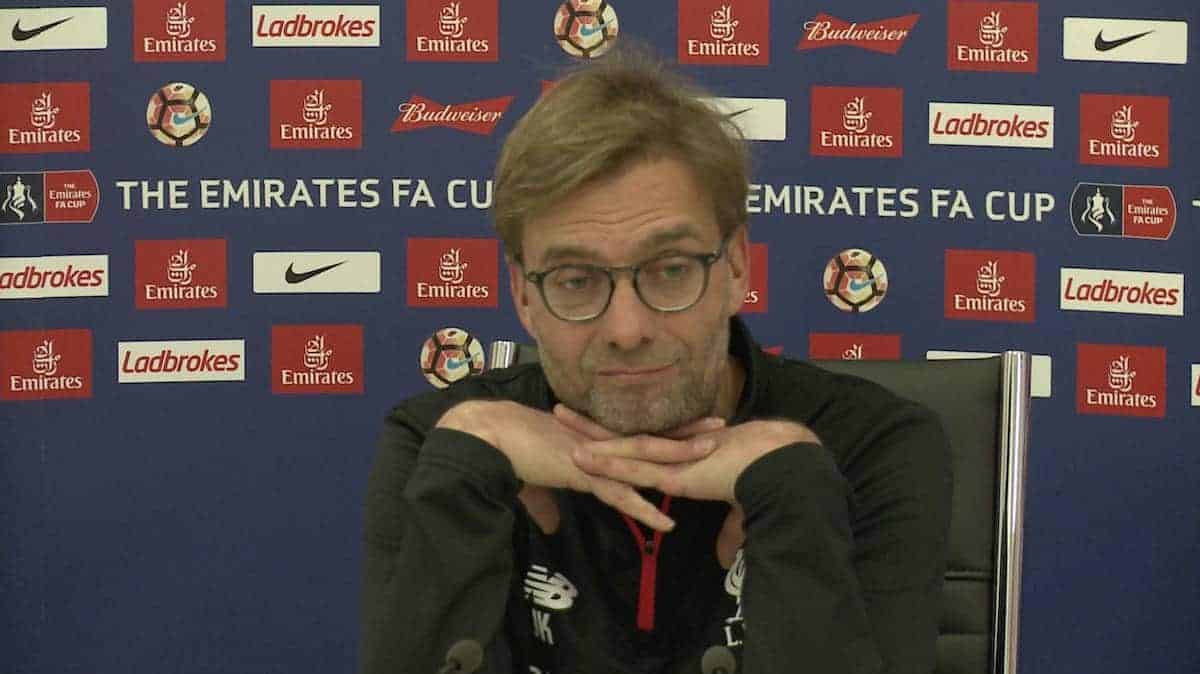 Jurgen Klopp discussed injuries and recapturing form at his press conference ahead of Liverpool’s FA Cup fourth-round clash with Wolves.

The Reds welcome Paul Lambert’s Championship outfit to Anfield on Saturday afternoon, in a bid to revive their flagging form in 2017 and reach the FA Cup‘s fifth round.

Having suffered back-to-back defeats for the first time this season with losses to Swansea City and Southampton in the past week, Liverpool are in desperate need of victory against Wolves, not losing three in a row since the end of 2014.

Taking to Melwood on Friday to preview his side’s FA Cup clash, Klopp suggested he would field a strong starting lineup as he looks for the Reds to rebuild.

“We had a few knocks after the game, and we’ll have to wait a little bit,” he said.

The German suggested it was unlikely that Adam Lallana (leg) would feature, but said “it would be great for us” if Nathaniel Clyne (rib) was passed fit to take part.

He was also asked about his efforts to coax form back out of his side, and employed an interesting metaphor to hammer home his faith.

“It’s a little bit like building a house, if you want,” he explained.

“You start building, and you’re full of enthusiasm, you think ‘great, in half a year, one year, I will have this house’. In the summer, weather’s good.

“Then November comes and you’re still not finished and now it’s difficult, and in this moment you stop building, it doesn’t make sense.

“You have to wait maybe sometimes for the rain to stop, but then you will live in a house when you stay [with it].”

Klopp also discussed recent criticism of Daniel Sturridge, saying “I thought after the Southampton game it was a really good game [for him] from the physical side.”

“He was really involved from the first until last second, there was not a big difference between the first half and the second half, all that stuff,” he added.

“Usually, and it’s not about speed or anything, Daniel Sturridge scores twice in this game, with the chances he had.

“But he’s a human being, so he missed the chances—that’s all.

“Of course, longer injuries, more injuries can have the effect that you lost the 100 percent trust in your body for sprinting.

“Ask a sprinter. It’s high intensity, that means everything, and if you get a few injuries after doing this maybe it takes a little bit of time, but that’s not lost forever.”

The 49-year-old also said he was unlikely to add to his squad before the end of the transfer window, while he hinted that loanee winger Lazar Markovic could still have a future at the club.