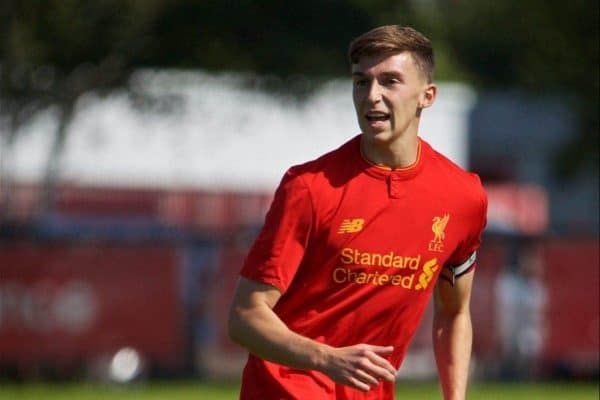 Conor Masterson: Profiling Liverpool U18s captain who could be next to step up to senior level

After joining the Liverpool squad for their mid-season training camp in La Manga, Conor Masterson looks primed for the future under Jurgen Klopp.

Masterson was among a host of teenagers included in Klopp’s 27-man squad at the resort in Spain, with the German utilising a break in fixtures to his advantage.

While their fellow youngsters have all turned out for the first team this season, Masterson and Dhanda have rarely been involved, even in training at Melwood, and this gave them vital experience.

But though Dhanda is regularly mentioned as one of the club’s most talented young players, Masterson has gone relatively under the radar.

So who is Masterson, and could he be the next youngsters to step up to senior level at Anfield?

Masterson was spotted turning out in his native Ireland in 2012, and signed a big-money deal with Liverpool after impressing for a Dublin & District Schoolboys League selection at the Kennedy Cup.

This saw him turn down interest from Man City, Man United and Chelsea, with Kenny Dalglish and Brendan Rodgers both playing a big role in convincing him to make the switch to Merseyside from Lucan United.

He didn’t move to Liverpool until he was 16, however, joining Neil Critchley‘s U18s on a full-time basis in 2014, with Kirkby the ideal destination in the eyes of Masterson and his father.

“Conor felt that Liverpool was the best place for him and that was the most important,” Ciaran Masterson explained. “This is just the first rung of the ladder for Conor.”

Since then, Masterson has continued to impress at U18 level, as well as working through the ranks for Ireland, for whom he is currently an U19s regular.

He has turned also out for the Liverpool U23s, though, making his debut along with Dhanda in a 1-0 defeat away to Sunderland, 10 days after Klopp’s arrival at the club.

And just as Shamal George, Paulo Alves, Ovie Ejaria and Ben Woodburn all clearly caught Klopp’s eye in his first experience of the Reds’ U18s back in 2015, this may have been a watershed moment for the Irishman.

Three months after that loss at the Stadium of Light, Masterson was included in Klopp’s squad to take on Exeter City in the FA Cup third round at the beginning of 2016, named on the bench for the 2-2 draw.

“It’s a dream come true, it was surreal, I got told Thursday I was going up to train at Melwood, and then Friday I travelled with the team,” he explained.

“So it was a bit hectic but it was an unbelievable feeling, I was taken aback to be honest.”

He didn’t make it onto the pitch at St James Park, returning the next day to play in the U18s’ 3-0 win over Man United, but his inclusion hinted at Klopp’s faith in him for the future.

After two seasons under Critchley, Masterson was given the captain’s armband on Trent Alexander-Arnold‘s promotion to the U23s—a trajectory he will no doubt follow soon enough.

A tall, agile centre-back, Masterson has long stood out from his counterparts at youth level, having loomed at 6’0″ from before he was snapped up as a 13-year-old in 2012.

Having hone his talents since then, he has progressed into a mature, ball-playing defender, capable of stepping out of the back in possession.

He is also able to dictate play with an accomplished range of passing, prompting forward moves with vertical passes or switching play with accurate long balls out wide.

While he is established at centre-back in the Reds’ academy, Masterson also proved his versatility by taking over from the suspended Liam Coyle for the U18s earlier this season.

With Coyle out for the mini derby at Everton‘s Finch Farm, he impressed in the No. 6 role in January’s 2-1 victory.

Serving as captain for Critchley’s side, Masterson has shown his leadership, marshalling a back line that has changed regularly throughout the season so far, including a shift in tactics to a five-man unit.

One flaw that stands out however, particularly when comparing him to Gomez (19) and Mich’el Parker (18), is that Masterson is still rather slender, not possessing the physicality of a typical centre-back.

But as Joel Matip proves in the senior squad, this is not a prerequisite for a top-level defender, and like the Cameroonian, Masterson has the pace and intelligence to negotiate this.

He typically finds himself in the right place at the right time to thwart attacks, while he doesn’t shirk his duties when it comes to making strong tackles, able to play with real aggression.

Masterson is clearly an impressive young talent, but where Klopp sees him in his long-term plans remains to be seen.

What is Masterson’s Future Under Klopp?

After being an unused substitute against Exeter, Masterson’s involvement in La Manga is a promising sign for the 18-year-old under Klopp, whose interest in the defender has spanned over 12 months.

Furthermore, the Irishman comes with an endorsement from Pepijn Lijnders, so is clearly a player who has impressed Liverpool’s first-team development coach both on and off the pitch.

Speaking during the Reds’ trip to Spain, Klopp described Masterson and Dhanda as “the next boys,” hailing their “good attitude” and attesting that they had “fitted in well.”

The duo have seemingly been earmarked for a first-team role if their development continues, though given the quality in Liverpool’s attack, Dhanda will face more competition than Masterson.

The Reds are not particularly blessed at centre-back, particularly in terms of depth, and the futures of both Lucas Leiva and Ragnar Klavan will be under consideration over the next 18 months.

And at U23 level, neither Tom Brewitt (20) or Nathan Phillips (19) are likely to have a long-term future, while Juanma has largely been utilised at left-back.

Masterson is ahead of Parker, Kane Lewis and George Johnston in his development, making him the obvious choice if Klopp looks to dip into his academy ranks for centre-back reinforcement.

However, centre-back remains a difficult position for a young player to break through in, with Masterson’s slim build something that will need to be addressed if he is to be trusted.

Nevertheless, with Klopp having shown his faith in youth already throughout his tenure, it is likely that Masterson, along with Dhanda and Rhian Brewster, would be the next to break through.