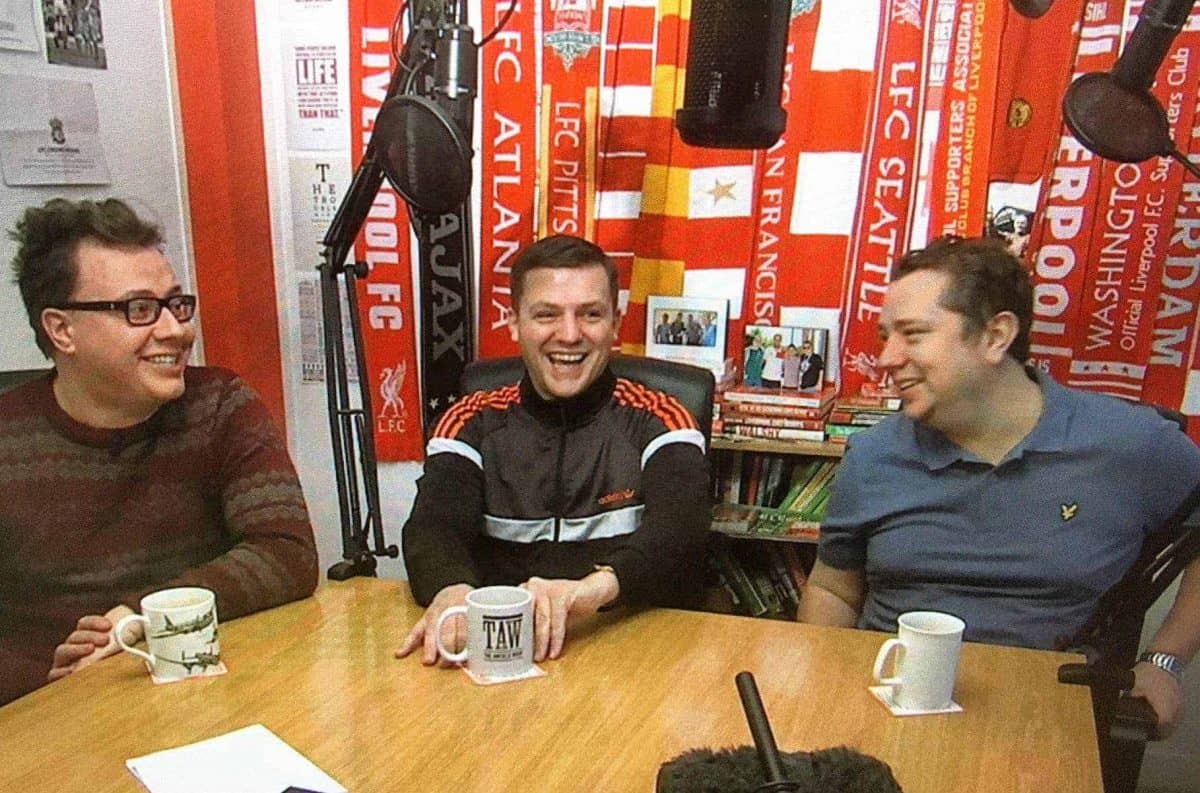 Continuing our look at the matchday routines of different fans, media, and more, we speak to The Anfield Wrap’s Gareth Roberts.

Gareth is a Kop season ticket holder and the editor of TAW – the Liverpool FC podcast founded in 2011 and featured on Radio City.

He offers good advice on what to do on your first trip to Anfield (sharing our hatred of half-and-half scarves) and support for safe-standing as part of the solution to help the atmosphere.

Mine varies these days if I’m honest.

Once upon a time I had a much more religious routine of arriving a couple of hours beforehand and always having a pint in the back bar of The Solly (now The 12th Man). I’d leave to arrive in time for the teams coming out.

These days, for a variety of reasons from different days and times for kick-offs to having a family, it’s more varied.

I still like a pint beforehand if possible though! It’s good to get one in post-match, too – I like that immediate discussion and how you can end up talking to complete strangers about how it really is time Liverpool bought that top-class goalkeeper…

With the increased capacity a pint around Anfield afterwards is now the sensible move – because otherwise it takes absolutely ages to get to town because of the traffic!

Then post-match it’s recording The Pink; tell us about that – where you record it and how it’s organised?

The Pink – our immediate post-match podcast – is done on a rota basis between our contributors. We always make sure we get one out there somehow as it’s one of our most popular shows.

For Anfield games, it’s a case of getting to our office in town — or the Radio City studios — as soon as we can. As mentioned above, the increased capacity of the ground has slowed us down on that score!

For away matches, The Pink has been recorded in all sorts of weird and wonderful locations — in cars, at motorway service stations, even in a karaoke bar once!

We’re committed to getting out there no matter what. It’s great when we’ve won, and won well. It’s not so much fun after a dull 0-0 or a disappointing defeat. Some of our subscribers say it forms part of their therapy to get over a bad result though. So we can’t let them down.

Get down there early! I’ve been going to Anfield for 27 years but I still enjoy getting down early on occasion and doing a full lap of the ground, taking in the atmosphere, the sights and the sounds, and having a pint of course!

It’s also a good excuse to nip off for a pie at Homebaked just over the road from The Kop (the Shankly pie is an absolute belter). If you’ve got time to do a couple of pubs around the ground I’d do that too as there’s a very different vibe and different groups of people in each one.

Do all the other stuff as well – get a pin badge, buy the Red All Over The Land fanzine on sale around the ground. Just, whatever you do, DON’T buy a bloody half-and-half scarf. They’re shite! You support The Reds. Wear a red scarf.

And do sing and back the team. Anfield’s a better place when that happens and everyone who goes through the turnstiles can play a part.

I can’t help but look with longing eyes to what is going on at Celtic Park. The safe-standing section there looks an absolute belter and it should be something that Liverpool has – at the very least – a conversation about.

Right now the shutters are up and a position against the idea is seemingly set in stone. Given so many of the match-going support would welcome a discussion, I think that’s the wrong stance from the club.

The Kop has rightly been a source of pride down the years but if the songs, flags and banners are going to survive the club needs to encourage and nurture the terrace culture that created them. That culture needs young, passionate fans in the ground, it needs accessible prices and it needs an area where likeminded people can congregate and sing, shout and create colour. At the moment we haven’t got that.

The Kop can bring an A game to a match when it counts but that isn’t enough – it needs an active area, a singing section and, ideally, a safe standing section. Rail seating. At the moment we have unsafe standing. Everyone who goes regularly can show you their bruises if you ask nicely!

* The award-winning Anfield Wrap release two free podcasts a week and offers a further 8-10 a week for a £5-a-month subscription fee. Look them up on iTunes, Audioboom or any podcast app and find out more about TAW Player, TAW’s subscription podcasts about LFC past and present, here.