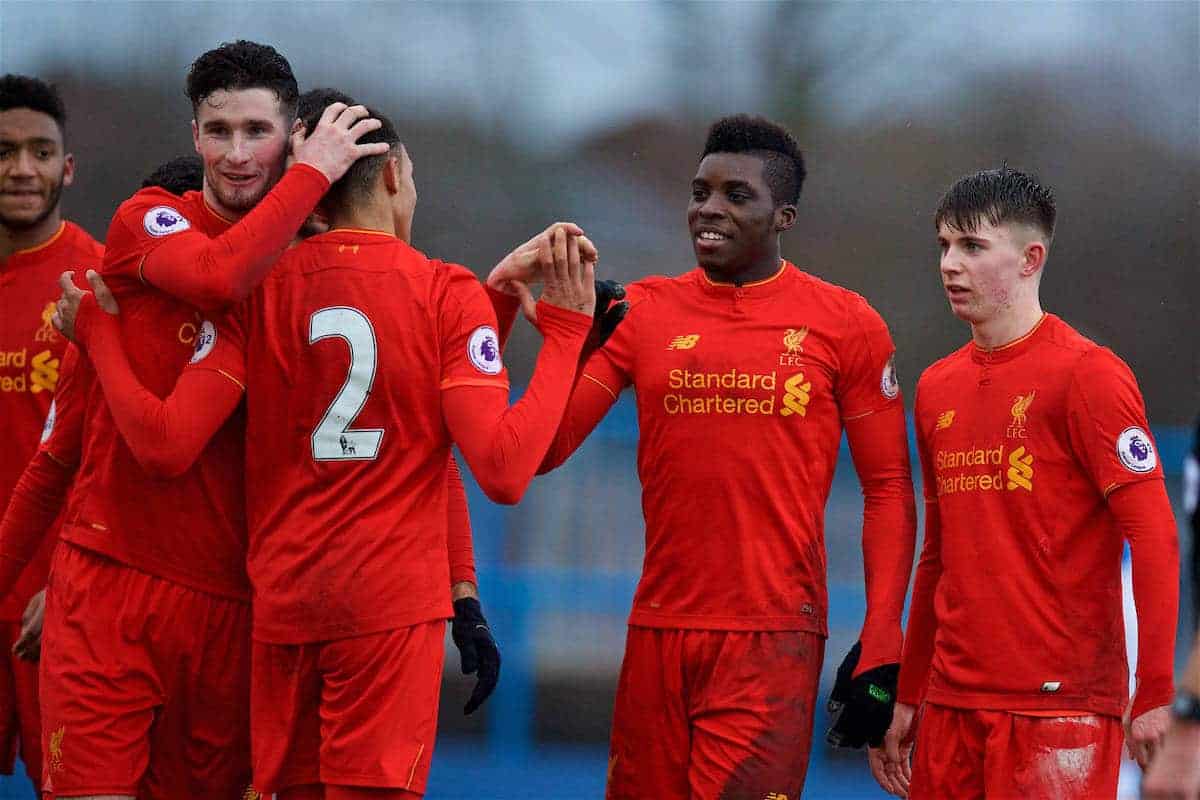 Inspired by Ben Woodburn, the Liverpool U23s continued their fine Premier League Cup campaign with a 6-2 victory over Huddersfield U23s on Sunday.

Taking to Curzon Ashton’s Tameside Stadium on Sunday afternoon, Mike Garrity’s U23s looked to continue their fine run of form in 2017 with a strong performance in the Premier League Cup.

Their opposition, Huddersfield, had lost both of their previous games in the tournament, having already suffered defeat at the hands of the Young Reds back in November, with Brooks Lennon, Harry Wilson and Cameron Brannagan on the scoresheet that day.

With both Lennon and Brannagan leaving on loan in the January transfer window, the U23s were a much-changed side, but Garrity was still able to call upon the likes of Trent Alexander-Arnold and Sheyi Ojo.

Able to put distance between themselves and Huddersfield, West Bromwich Albion and Ipswich Town, Liverpool needed a strong performance on Sunday, and Garrity oversaw a fine display. Both sides began with a series of hopeful long balls, not allowing their opposition to settle, but it was Liverpool who found the first opening, with Alexander-Arnold eventually blasting over.

Just over 10 minutes later, Woodburn had set up Liverpool’s second, embarking on a mazy run from the left flank and through the Huddersfield defence into the box, teeing up Matty Virtue, with the midfielder back-heeling into an open net.

The Terriers did look to trouble Kamil Grabara in the U23s’ goal, but the likes of Alexander-Arnold and Joe Gomez continued to thwart their advances, and Garrity’s side added their third before the break.

Woodburn was provider once again, with the 17-year-old this time returning the favour for Wilson, who sent a curled effort beyond Luke Coddington to make it 3-0, before Ojo headed home another to give the U23s a four-goal lead at half-time. Lifted by their distinguished first-half display, the Young Reds kept control after the interval, and it wasn’t long before Wilson had scored his second of the afternoon, with a looping header.

However, Huddersfield clawed one back within two minutes, with the persistence of Olly Dyson winning out, as the midfielder side-footed home after Grabara made the initial save.

The big Polish goalkeeper was under the spotlight again with 20 minutes left to play, and after shanking his clearance on the edge of the box, Dyson was on hand to capitalise and score his second.

With Liverpool springing a counter-attack on the right flank, tempers flared as Alexander-Arnold was brought down, with Huddersfield midfielder Jamie Spencer seeing red for his involvement.

This cast a cloud over the closing stages at Tameside, but Garrity will have been pleased as Woodburn struck again late on, pushing the Young Reds through to the last 16 of the cup.