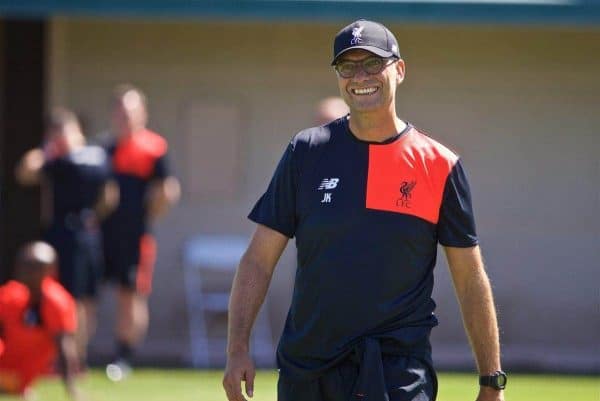 Lowdown on La Manga: Where are Liverpool going and what’s in it for the team?

Liverpool are heading off to Spain for a short break on Wednesday, with the first team squad to visit La Manga for five days. It’s a location both Jurgen Klopp and old-timers involved in the Reds will be familiar with, but where is it and why has it been chosen?

Straight after the Anfield victory over Tottenham, the boss spoke about the two-week period between games that Liverpool were facing, as a result of not being in action in the FA Cup fifth round. “Two or three days rest and then pre-season [in preparation] for the rest of the season,” Klopp explained.

And while fans would prefer to still be involved in the hunt for silverware, their cup exit has provided an opportunity.

With no winter break in Premier League football, questions have continually been asked of whether the lack of rest and recuperation time works against England’s top clubs, both in European competition and with their own form in the final third of the season when accumulated fatigue can have a big impact.

Klopp and his team of coaches now have a rare chance to take advantage of a mid-season break in England and prepare the team for a full-on assault of the top places in the league table.

On the south-east coast of Spain, the Costa Calida—the warm coast—is so named for its year-round high average temperatures. Already basking in sunshine, the local zone is set for temperatures around 18 degrees while the Reds are in place.

The area is surrounded by small beachside towns, on both the Mediterranean Sea and a much smaller body of water, the mar Menor. A shallow, calmer inlet almost entirely closed in from the sea, it makes a great location for water sports, while the hills which lead to the resort itself provide great terrain for the fitness inclined.

The resort at La Manga hosts not just football training facilities but bike trails, signature golf courses and an array of other sports including tennis and bowls—as well as, of course, a huge residential complex for both permanent residents and holiday makers.

If the squad aren’t to be kept focused on only fitness matters, the historical city of Murcia is only half an hour away, the port of Cartagena even less, and another football-specific training arena the same distance away, Pinatar Arena, which hosts teams from all over Europe every winter and summer for training camps and pre-season friendlies.

Klopp is no stranger to the area, travelling twice with Borussia Dortmund to Murcia. On both occasions his side trained and played both at La Manga Resort and Pinatar Arena, featuring at the time the likes of Mats Hummels and Mario Gotze.

Indeed, Klopp and his side were at Pinatar Arena just a single day before they confirmed the signing of Nuri Sahin, on loan from Real Madrid after his short stint at Liverpool came to a premature end in 2014.

Klopp took his Dortmund squad back to La Manga in 2015 too, a trip that helped turn their season around after a disastrous start to what would ultimately be his final season at BVB.

With much of Liverpool’s style under Klopp requiring great physical exertion, which in turn demands great preparation, the boss is no doubt clear how much his trips to the region helped his Dortmund side.

What about Liverpool? Well, the Reds have also been to La Manga… but perhaps not many of the current regime were around to experience it.

In fact, it was the base for Rafa Benitez and his team in the buildup to the 2007 Champions League final.

While Luis Garcia was recuperating from injury and Fabio Aurelio made use of the bike trails with Pako Ayesteran, the rest of the squad trained on the pitches and occupied the hotel at the resort.

The break at La Manga didn’t end up doing enough good for the Reds to triumph on that occasion, but with an important victory over Spurs in the bag, Klopp and co. will hope the upcoming break and trip away can aid the push for a strong end to the current season.