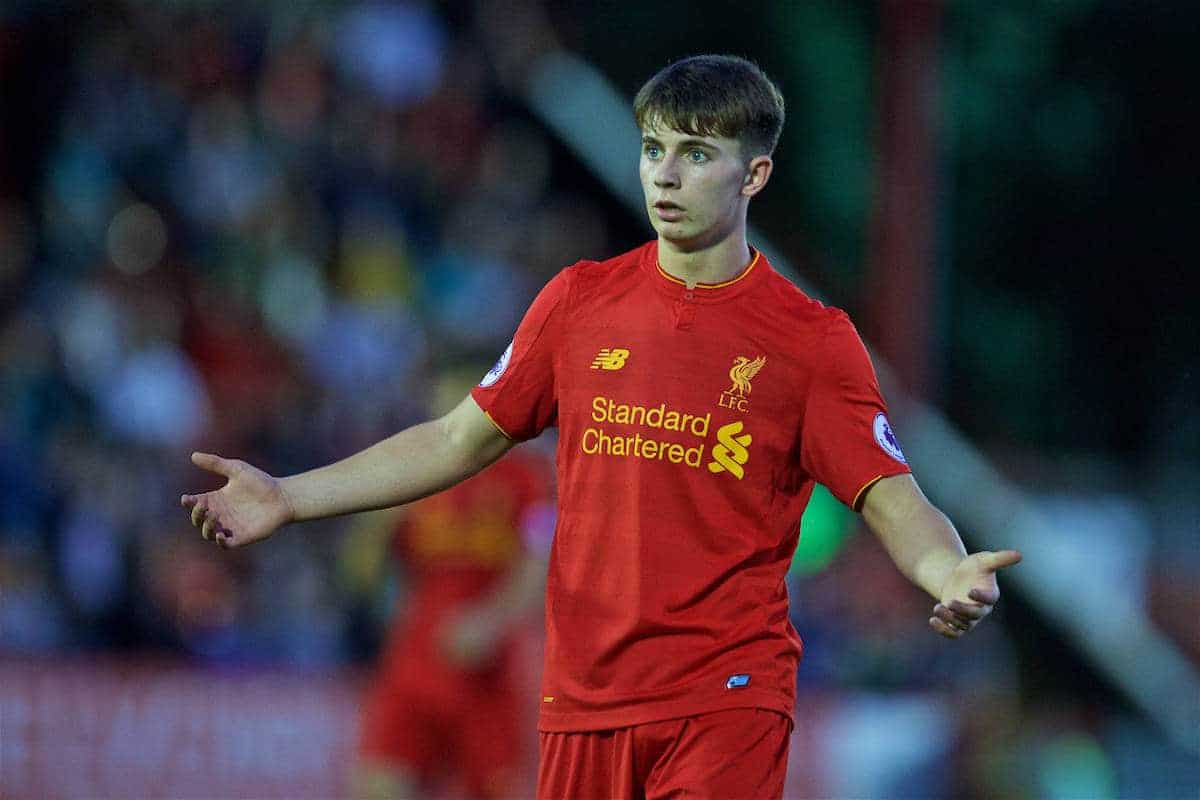 Liverpool teenager Ben Woodburn has been named in the Wales squad for next week’s international break, but he’s also eligible to play for England.

Woodburn hit the headlines in November following his record-breaking goal at Anfield against Leeds United in the League Cup.

Making just his second appearance for the club, having appeared from the bench in the final minutes of the previous game against Sunderland, he became Liverpool’s youngest ever goalscorer at the age of 17 years and 45 days.

In scoring the goal he took a record previously held by Michael Owen, who scored in a 2-1 defeat to Wimbledon at Selhurst Park in May 1997, aged 17 years and 143 days.

Woodburn’s goal has brought further attention to a player who was already impressing at youth level, having been at Liverpool since under-7s.

At the age of 12 he was already playing a year above his age, and his former PE teacher, Mark Lindley, has spoken of the interest in him from an early age.

“We went to Barcelona when Ben was 12,” Lindley told The Times.

“The Espanyol coaches were trying to tap him up really. They absolutely thought he was fantastic, his skill level was amazing and you could see the coaches all around him were thinking ‘what a talent’.”

Woodburn qualifies for Wales through his Grandfather and has played for their under-17 and under-19 sides.

Woodburn has a wide array of skills and has played in a number of positions from midfield to attack. However, the teenager has already displayed an eye for goal, scoring with all types of finishes including tap-ins, free kicks, chips, volleys, and overhead kicks.

This means he’s likely to end up as an attacking player, either from wide, off the striker, or through the middle himself.

His first goal for the club came as he played in the left sided attacking midfield berth usually occupied by Philippe Coutinho.

He hails from Tattenhall, near Chester — a village which lies in Cheshire, England, but isn’t too far from the Welsh border. He qualifies for Wales through his maternal grandfather, according to this report by Wales Online.

The extra attention on the player following his goal has alerted the England national team set up who will no doubt try to persuade him to switch allegiances.

His manager Jurgen Klopp has tried to persuade the media not to put him in the spotlight too early, but given his impressive performances at youth level and his fairytale goal at Anfield, this will be a difficult task.

The Welsh FA are probably thinking along similar lines to Klopp, but will have known for a while that a player of this quality will eventually attract admiring glances from the country of his birth.

Woodburn has already captained his adopted country at youth level and seems ingrained in the Welsh way as they mould their youth players to play a certain way, ready for the senior side.

Under Chris Coleman, Wales have taken great strides building on the foundations put in place by the late Gary Speed.

They reached the semi-finals of the 2016 European Championship in France despite losing to England in the group stages, and are now looking like a side who can qualify for tournaments regularly.

Prior to competing in Euro 2016, they had only reached the finals of a major tournament once before — the 1958 World Cup in Sweden where they made it to the quarter-finals.

When it comes to choosing a national team it might serve Woodburn well to stick with what he already knows.

Wales have an increasing amount of impressive talents, none more so than Real Madrid’s Gareth Bale who is now considered to be among the best players in the world.

Playing for Wales hasn’t done the former Tottenham and Southampton man much harm, while the likes of Aaron Ramsey and Joe Allen are among other high-profile players whose form has been boosted by Wales’ recent success.

Liverpool’s Harry Wilson has also been capped for Wales and looks set to be a regular in future national teams given his performances for the club’s U23 side.

Land of Our Fathers or God Save The Queen?

If Woodburn changed his allegiances and decided to don an England shirt at international level, he would be subject to much more scrutiny and there would be no more a guarantee of success with them than there would be with Wales.

The media frenzy and unreasonable fan expectation which follows the England team can negatively affect a player’s game, but if the player is mentally sound as well as technically proficient — and players need both of these at the top level — then this shouldn’t have an effect anyway.

By all accounts, Woodburn possesses the mental strength to go with his natural ability, so the pressure shouldn’t get to him whichever team he picks.

So how should he choose? Stick with his buddy — the equally impressive Trent Alexander-Arnold who’ll no doubt be an England full-back in the future — or follow in the footsteps of Liverpool’s other great forwards, Ian Rush and John Toshack and side with Wales?

The question could be posed another way as: Land of Our Fathers, or God Save The Queen? If it came down to choosing the best national anthem, then Woodburn best brush up on his Cymraeg.