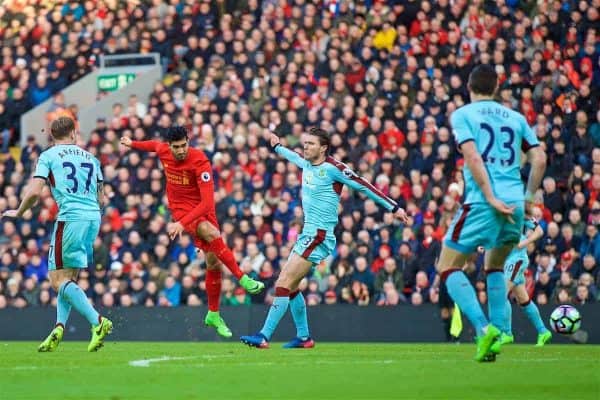 “Far from fancy, but Liverpool made it happen” – How the back pages reported Liverpool 2-1 Burnley

Liverpool were praised for finally showing they can win ugly as the Reds ground out a crucial 2-1 victory over Burnley despite being far from their best.

Jurgen Klopp’s men secured a big three points in the race for Champions League football as the Reds battled from behind to see off the dogged Clarets.

Ashley Barnes’ early strike put Burnley ahead, but a perfectly timed equaliser from Gini Wijnaldum and excellent finish from Emre Can transformed the game and proved just enough to hand Liverpool victory.

The Reds were miles from their best, but Klopp will be pleased by the way his team finally backed up big game success by digging deep to grind out a rare ugly win – something Liverpool have long been criticised for their inability to do.

The win was also vital for the extra pressure it puts on Arsenal and Man United, who now have no margin for error in their games in hand as they look to claw back five and six point deficits on the fourth-placed Reds.

Here’s what the media made of events at Anfield.

Post-match reports focussed heavily on how Liverpool proved they can dig deep to win ugly when required, and how vital the victory was with the Reds winning while not at their best.

The Mail’s Dominic King assessed the game as a ‘job done’, which is what Liverpool need to finish inside the top four:

This, it must be stressed, was not a day when Liverpool showed their best face.

Yet they got the job done and that is all that matters between now and May 21 if Liverpool, who were watched by Fenway Sports Group president Mike Gordon, are going to return to Europe’s premier competition.

Richard Jolly, writing for The National, thinks that this is the sort of win Klopp’s side need to grind out more regularly:

Perversely, it was the sort of victory Liverpool need to replicate more often and not merely because, while they had defeated Tottenham and Arsenal, they had not overcome a Premier League minnow in 2017 until Burnley’s narrow, cruel defeat.

The Mail’s Ian Ladyman accepted such a win was good for the Reds, but was more concerned with Liverpool’s inconsistent form:

It is not a habit Jurgen Klopp will wish his team to acquire.

Sooner rather than later Liverpool are going to have to find some real form if they are not to fall out of the top four of the Premier League.

Jolly also believes winning in such a manner will give Klopp’s men momentum going forward:

But they procured the points, and perhaps the result, if not the display, will give them momentum.

Offering thoughts on why Liverpool struggle to perform against lesser opponents, the Independent’s Luke Brown feels it’s down to the Reds’ lack of squad depth:

But against the so called lesser teams, they have struggled. Key to this is their lack of strength in depth, which was made glaringly evident by their substitute’s bench against Burnley.

Certain reporters also drew positives from the way the Reds dealt with the physical, well-drilled and direct Clarets side – the sort of opponents
Liverpool have come unstuck against this season.

ESPN’s David Usher was pleased by the way Klopp’s side battled, despite being “terrible” on the day:

It’s impossible to play well every week but you need to be able to win, regardless of performance.

The home side were terrible for much of this game but they battled and scrapped, which bodes well.

Rather than wilt under pressure, they stood up to Burnley‘s aerial bombardment.

It wasn’t convincing but you couldn’t question the levels of commitment and desire as Klopp’s men put their bodies on the line and refused to cave in.

However, the Mirror’s David Maddock felt the lack of direction in the performance showed Liverpool lack leaders, especially without Jordan Henderson:

Jurgen Klopp keeps suggesting there are no such things as “leaders” in modern football, but it sure as hell looked as though Liverpool needed some in the first half against Burnley.

Without Jordan Henderson, Liverpool lacked any real drive in the middle of the park for too long periods, and someone to get them pumping.

Though there was little to be positive about with the individual performances produced, reporters discussed the impact of ‘deputies’ Emre Can and Divock Origi and offered thoughts on Philippe Coutinho’s struggles.

Jolly praised the impact of Liverpool’s ‘stand-in’ duo, Origi and Can:

They were stripped of fluency against Burnley. Yet Divock Origi, standing in for the injured Roberto Firmino in attack, helped set up two goals. Emre Can, deputising for the sidelined Jordan Henderson as the holding midfielder, scored the winner, fizzing a shot into the bottom corner.

Melissa Reddy, writing for Goal.com, wasn’t convinced by the pair’s performances, but praised the “misfits” for inspiring a crucial win:

The pair, off form for swathes of the season and central subjects of criticism as the club’s ambitions slipped from a title challenge to a top-four chase, proved decisive again.

It wasn’t pretty, it wasn’t fluid and it was far from fancy, but Liverpool made it happen – chiefly through the men considered their misfits.

Pearce praised Can’s vital impact but feels the German needs to “raise the bar” to convince Liverpool to match his contract demands:

Can needs to raise the bar and start delivering more consistently to prove that the Reds should go all out to retain his services.

Usually such a decision would send shockwaves through the crowd, but the fact that nobody was surprised, let alone upset, tells you everything about how disappointing “El Magico” was once again.

Wijnladum wears the shirt that used to be property of Ronnie Whelan, a Liverpool legend who captained the side in the victorious 1989 FA Cup final. The Dutchman is not of Whelan’s quality but he goes about his business under the radar in a similar way.

Whelan also had the ability to pop up with crucial goals at key moments and that is something Wijnaldum has started to do, too.

And finally, Brown reserved praise for Simon Mignolet for an authoritative performance:

This display will have done nothing to harm Mignolet’s chances of proving to Klopp that he is good enough to be his permanent first-choice keeper.

He confidently dealt with the large number of long balls Burnley pelted into his box, with the only blot on his copybook being his occasionally poor distribution.