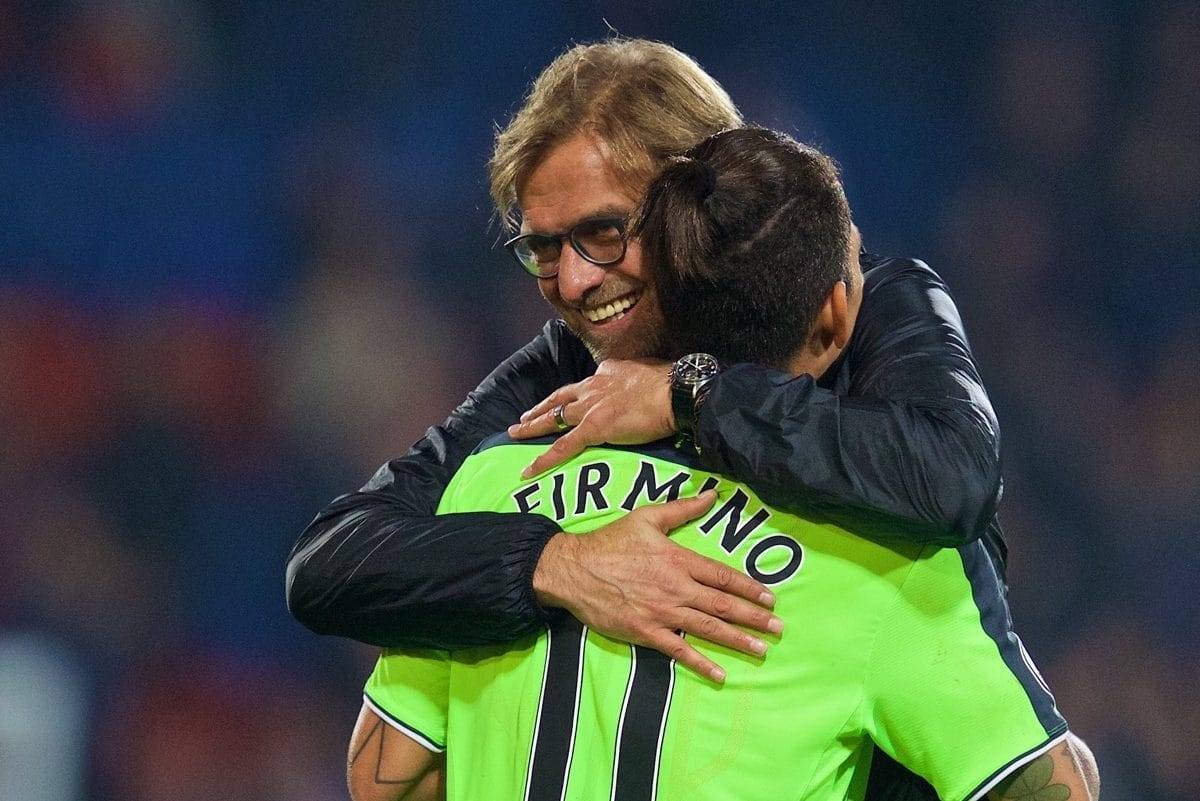 Jurgen Klopp is hopeful Roberto Firmino will be fit for Sunday’s trip to Man City, but the boss could face a selection issue in attack if the Brazilian fails to recover as injuries mount.

The Reds kick-off the final 10-game sprint for Champions League football with a huge battle against Pep Guardiola’s side.

Liverpool arrive in the strongest form of 2017 after back-to-back wins, and look to continue the upturn against a City side hurting from Champions League elimination, and who the Reds have beaten in all of the last four league games.

Though the Reds are in improved form, the same can’t be said of the squad’s condition with Divock Origi becoming the latest injury concern, but Klopp is at least hopeful of having Firmino available for the crucial game. Klopp’s selection will again rest on the recovery of those he’s waiting on, which is a far from ideal arrangement for a vital game.

The boss will be desperate for Firmino or Origi to be available, and having at least been involved in light training since Wednesday, the former seems the more likely to make it.

Klopp said in his press conference that Firmino “should train” with the first-team in final preparations on Friday or Saturday, which the German stated would likely be enough for him to start on Sunday.

If Firmino – who has often provided the catalyst for big-game success – does come through training unscathed, he would replace Origi to re-form the lethal front trio with Philippe Coutinho and Mane.

That would be the only adjustment to an otherwise unchanged team, which would see the Reds start with the strongest lineup currently available. Klopp will afford Firmino and Origi every opportunity to prove fitness, but both could miss out if the boss opts to take a cautious approach as the business end of the season approaches.

This would leave the Reds without a genuine striker, which could result in Mane being moved up top where the Senegalese can use his pace to spearhead counter-attacks.

Klopp has a couple of options over who to deploy in support of Mane, including handing Ben Woodburn a first Premier League start on the left, switching Coutinho to the right.

But the more realistic reshuffle would see Adam Lallana move to the right of the front trio to join Coutinho and Mane, allowing Lucas to slot into defensive-midfield behind Emre Can and Gini Wijnaldum.

The understrength attack could persuade Klopp to restore the first choice defence, dropping Ragnar Klavan and recalling Lovren, and a reshuffled XI would look like this: Liverpool have produced their best on the big occasions, and another display will be crucial to ensuring a strong position is commanded in the top-four race going into the international break.