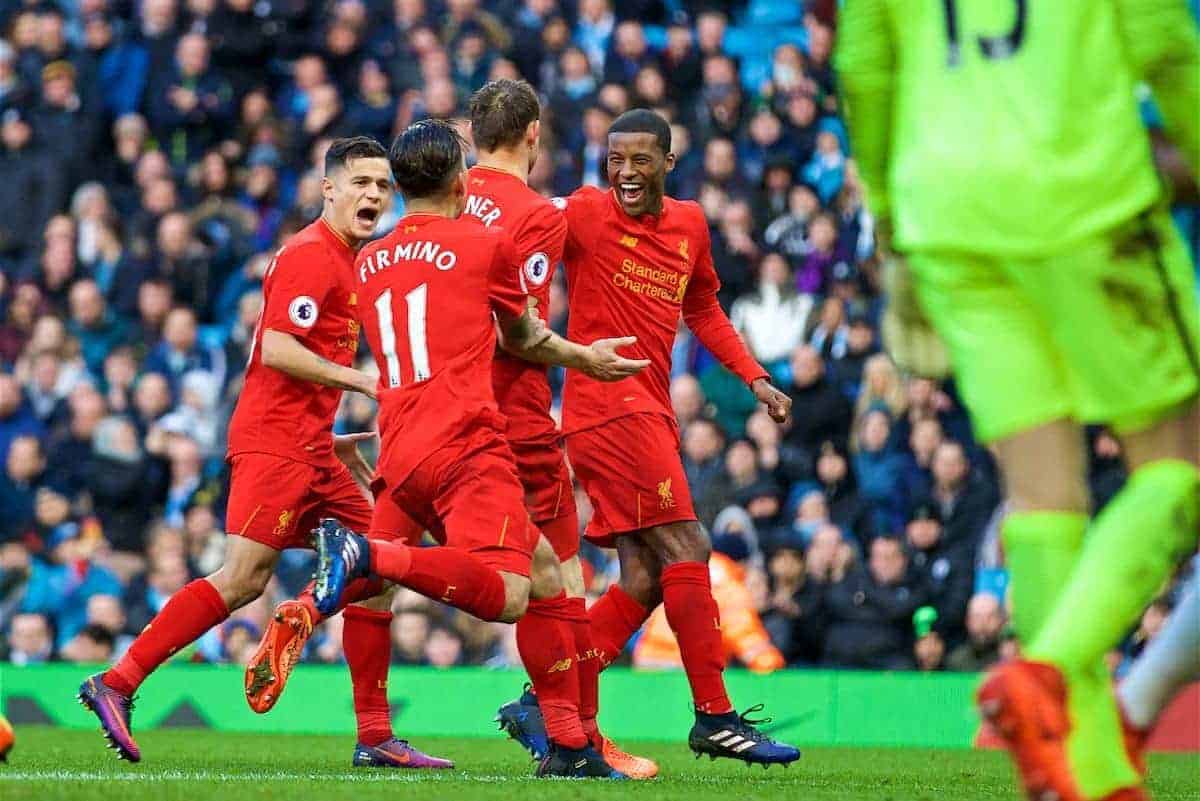 Liverpool were held to a 1-1 draw against Manchester City in a crucial top-four clash at the Etihad Stadium on Sunday evening.

Liverpool needed to pick up a victory to keep their hopes of a top-four finish alive and it was a feisty affair from the off.

Roberto Firmino was named in the starting lineup despite doubts over his fitness and Ragnar Klavan retained his place at centre-back.

It was City who started off brighter but Liverpool grew into the game and they had several chances to take the lead in the first half.

The second half was even more open than the first but it was Liverpool who broke the deadlock when Firmino was brought down in the box and awarded a penalty.

James Milner cooly dispatched to give Liverpool a slim lead but City pushed for an equaliser and were rewarded when Sergio Aguero slotted the ball past Simon Mignolet with less than half an hour to go.

Fans were relieved to see Firmino in the starting line-up…

There were a few questionable decisions from Michael Oliver…

Got our work cut out with Michael oliver. Two pens, one Red & firmino gets a yellow for winning ball back

“2 clear pens, one red worthy challenge by Toure and an elbow against Matip…refs again on their way to decide a game..”
– PJ POP on the forums.

How can he miss that!

“Basically, had Lallana fallen down in the path of the ball, that ball would have gone in. I’ll be shaking my head till the end of the season…”
– Norse Dweller on the forums.

Despite several chances to score the winner, Liverpool were held to a 1-1 draw…

Just crawling down from the ceiling after that Adam Lallana miss, how Adam…………how ?

Lallana missed a sitter but they missed a few good chances as well, good point that, Origi?looked like he was running in water, strange

“Good battle. It was the perfect game to see where we need strengthening.”
– Jon Hamm on Facebook.

Would've taken a point before kick off, but you can't help feel disappointed after that Lallana miss. Such an end to end game.

Happy with a point away at #MCFC, especially given it could have ended 6-6! Our record against the top teams this season is incredible.

“I would have taken a point at the start of the game. Both sides missed a few chances they should have stuck away but hey, a point and we move onto the derby match against Everton.”
– James Hoult on Facebook.

“Fair result tbh, City didn’t deserve to lose too. A point at the Etihad is always a good point..”
– Mohammed Bouali on the forums.

Cant pick between Gini or Emre as MotM, both showed a bit of everything today

A draw away from home against a strong side missing Henderson, Sturridge, Lovren just back etc. Will take that. Top four very realistic now.

You can't be to disappointed with the draw LFC, played really well, but as I have said we desperately need a quality striker

“What a game and yes I’ll take the point. I have to admit I was nervous for the last ten minutes. I think I’m still getting my breath back now. The scoreline for both teams could have been much more though..”
– Chris on the forums.