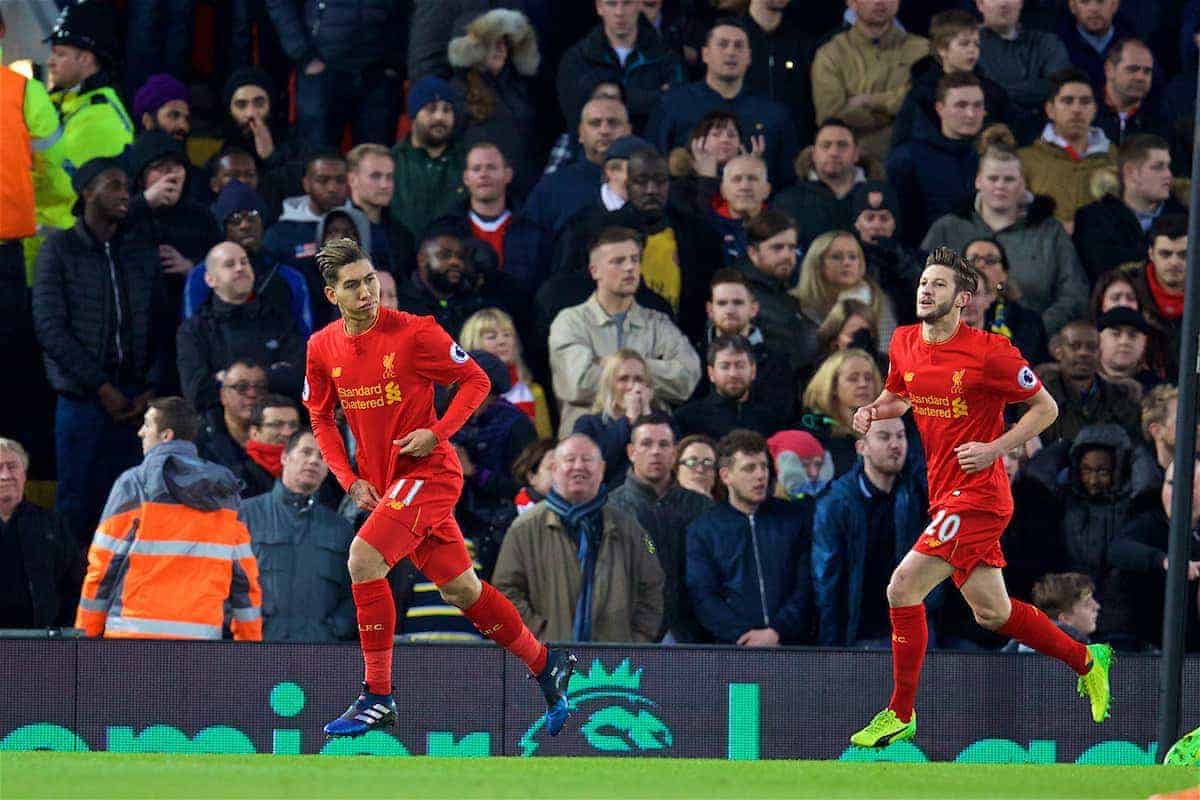 Liverpool secured a priceless 3-1 victory at home to top-four rivals Arsenal on Saturday, in what proved to be a veritable game of two halves.

Liverpool welcomed the Gunners to Anfield on Saturday evening, looking to continue their fine run of form against the Premier League‘s big six and push for Champions League qualification.

After a demoralising 3-1 loss away to Leicester City on Monday night’s Jurgen Klopp‘s side needed a strong performance on Merseyside—but the German’s lineup options were limited.

Klopp made one change to the side that fell to defeat at the King Power Stadium, bringing in Ragnar Klavan in place of Lucas Leiva, with Jordan Henderson and Daniel Sturridge among those out injured.

But having not lost at home to the Gunners since 2012, and producing a 4-3 win in the season’s first clash with Arsene Wenger’s side in August, Liverpool enjoyed more of the same at Anfield. With Anfield roaring them on once again, Liverpool started brightly in the opening stages, with Emre Can‘s defensive remit allowing Klopp’s full-backs to push forward and support.

It was a sweeping move involving the Reds’ forward quartet that put them ahead before the 10-minute mark, with Adam Lallana laying the ball out to Sadio Mane, whose low cross was dummied by Philippe Coutinho, allowing Roberto Firmino to hammer home into the roof of the net.

Arsenal continued to struggle as they looked to adopt a direct approach, and Liverpool were always ready to spring attacks when space opened up, with Coutinho going close on 29 minutes.

The Reds dominated throughout the first half, and Firmino turned provider for Mane before Bobby Madley could call for the interval, sweeping into the winger’s path after great work from James Milner and Georginio Wijnaldum.

With Mane powering in his 12th of the season, the Reds found themselves in an excellent position at the break, with Arsenal wilting up against their energetic pressing game.

Clearly acknowledging an error in the buildup, Wenger sent on Alexis Sanchez at half-time, with the Chilean replacing the struggling Francis Coquelin as Arsenal went for all-out attack.

Sanchez joined Olivier Giroud up front, and his movement allowed his partner more space, with the Frenchman drawing a brilliant save from Simon Mignolet from close range three minutes after the break.

Though the Reds kept up the intensity in attack, Sanchez’s creativity delivered a hammer blow as he thread the ball through for Danny Welbeck to lift over Mignolet to reduce the deficit.

With the contest getting fraught, Liverpool needed to produce a solid defensive display, while at the other end, centre-back Joel Matip went close to adding a third, but his far-post header was too weak.

Klopp opted for an intelligent tactical substitute with this in mind, too, sending Divock Origi on to replace Coutinho, allowing Firmino to drop deeper as the Reds looked to hold on.

Origi hit the post shortly after, before he played a key role in a stunning counter-attack, with Wijnaldum’s late goal putting the icing on the cake as Liverpool moved up to third in the table.