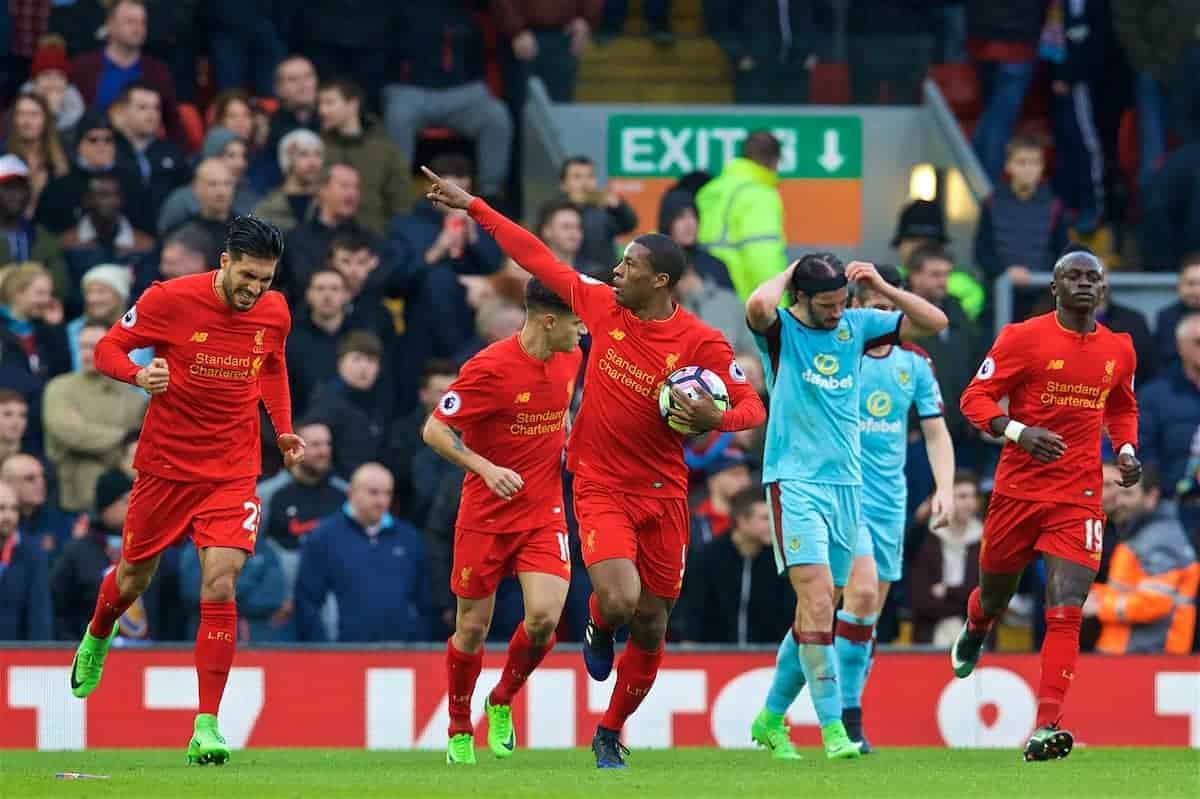 Liverpool’s ability to adapt, change and improve midway through Sunday’s 2-1 win over Burnley could prove influential in the race for the top four.

Welcoming the Clarets to Anfield, Jurgen Klopp‘s side found themselves under unwanted levels of pressure due to their poor record against the Premier League‘s smaller sides.

Despite Burnley having failed to win in any of their previous 13 away games in the top-flight this season, drawing two and losing 11, Liverpool’s record weighed against them in preparation.

Previous losses to Leicester City, Hull City, Swansea City, Bournemouth and Sean Dyche’s side themselves back in August pointed towards a chink in the Reds’ armour, ready to be exposed.

While it was a far from convincing performance from Liverpool, emerging with all three points in what was a tough test of their credentials bodes well for hopes of securing Champions League football this season.

This was a positive step for the Reds, as they continued their push for a top-four finish by vanquishing one of the league’s lesser lights by acknowledging their pitfalls and growing. Though Klopp’s hands were tied by injuries to Dejan Lovren, Jordan Henderson, Roberto Firmino and Daniel Sturridge, the German was still able to field a strong Liverpool lineup on Sunday.

Replacing the absent Firmino with Divock Origi, he made just one change to the side that produced one of their finest performances of the season at home to Arsenal the previous weekend.

But, like clockwork, the Reds squad that turned up to take on Burnley was far removed from that of eight days before.

The Clarets started hard and fast, taking their cues from the 2-0 victory over Klopp’s side at Turf Moor at the beginning of the season, with the attacking tandem of Ashley Barnes and Andre Gray thriving.

With Gray prowling the channel between James Milner and Ragnar Klavan, the 25-year-old’s pace and determination saw him continuously exploit the veteran duo.

As Gray dragged the Liverpool back line out of shape and into discord, spaces quickly opened up both in front of them and behind, and within seven minutes Burnley scored their first goal at Anfield since 1975.

The ease with which Matthew Lowton was able to saunter forward and play a sumptuous low cross for Barnes to prod home at the far post highlighted a myriad of problems in the Reds’ setup.

Beyond the back footed Milner and Klavan, Georginio Wijnaldum, Adam Lallana, Philippe Coutinho and Divock Origi were all anonymous for the majority of the first half at Anfield.

And those making a tangible contribution, such as Joel Matip and Emre Can in defence, and Sadio Mane in attack, were lacking the incision required to replicate that impressive display against the Gunners.

As has been the case on a number of occasions throughout the season so far, Liverpool lacked intensity against a smaller side, with suspicions of arrogance creeping through – in the first half against Arsenal, the Reds attempted 15 tackles, with this dropping to four on Sunday.

But fortune struck on the cusp of half-time, with Wijnaldum’s late strike prompting a change in approach.

There are few better times to score when performing poorly than just before the interval, and Wijnaldum’s fifth Liverpool goal will have provided the inspiration for a rousing break in the dressing room.

Despite his side’s lacklustre effort in the first half, Klopp opted to keep faith in his starting lineup—though that may well have been due to the inexperience of his substitutes.

While they were far from their most accomplished, the Reds side that emerged from the Main Stand tunnel for the second half was significantly improved on the opening 45 minutes.

Most notably, the core defensive trio of Can, Klavan and Matip came out with renewed vigour, and the physical threat of Barnes and Gray was diminished, as they triumphed both in the air and on the ground.

Jarring with Martin Tyler’s rhetoric on Barnes’ aerial dominance, it was Can who outwitted the one-cap Austria U20 international, winning three headers to the striker’s one in the second half.

After a shaky first half at centre-back, Matip opted for a more straightforward approach after the interval, making 10 clearances, with only Burnley‘s Ben Mee registering more (12).

And Klavan, who is arguably only in the side due to Lovren’s injury, encapsulated the Reds’ gritty, never-say-die attitude with an excellent, sprawling block to deny Barnes his second of the afternoon. Liverpool were considerably improved moving forward, too, as they began to get the ball down and play, with the support of Wijnaldum and Can boosting the likes of Mane and Origi.

It took a moment of brilliance from Can to provide the winner, driving forward to latch onto Origi’s pass and sending a low, swerving ball past Tom Heaton to make it 2-1, and it was befitting of his revival.

The German’s celebration, storming towards the Reds’ support and performing a trademark knee slide before being swarmed by his team-mates, was marked by the joy of swelling confidence.

“You have to react, and he reacted well,” Klopp said of his compatriot’s response.

“The second half was really good, especially in his position, you can imagine how important it was to have this player around.”

The Reds had found their feet again, and their ability to hold onto their lead and seal the three points was hugely commendable, with their shift in attitude at half time key.

It wasn’t only a shift in mentality that fuelled Liverpool’s comeback victory, however, with Klopp showing his tactical prowess with a series of changes from the sidelines.

Firstly, the decision to drop Can back into a more defensive role after going behind in the first half gave the Reds stability, with the 23-year-old helping Matip and Klavan to settle.

But more importantly, Klopp’s move to withdraw Coutinho on the hour mark, after a worryingly abject display from the Brazilian, was bold.

Now Liverpool’s highest earner, Coutinho has so often been their inspiration in attack, but on Sunday he continued his run of hit-and-miss form with a truly unremarkable showing.

And though Klopp had few proven options on the bench, he made the call to replace Coutinho with 17-year-old Ben Woodburn, with this daring approach rewarded with a more open, tenacious forward line.

Later on, too, the move to take off Origi and send on Lucas Leiva, shifting Mane into an unorthodox role up front, saw Klopp acknowledge the need to grind out the result.

Victory on Sunday saw the Reds remain within touching distance of their top-four rivals, Tottenham and Man City, and move further away from the chasing pack of Arsenal and Man United.

It also lifted their average of points per game coming from behind to 1.27, with this being their best return since the 2008/09 campaign (1.83), according to Andrew Beasley.

Doing so against a side that had already proved a threat to their hopes earlier in the season was of paramount importance, and Liverpool’s ability to fight back for an ugly win is hugely encouraging.