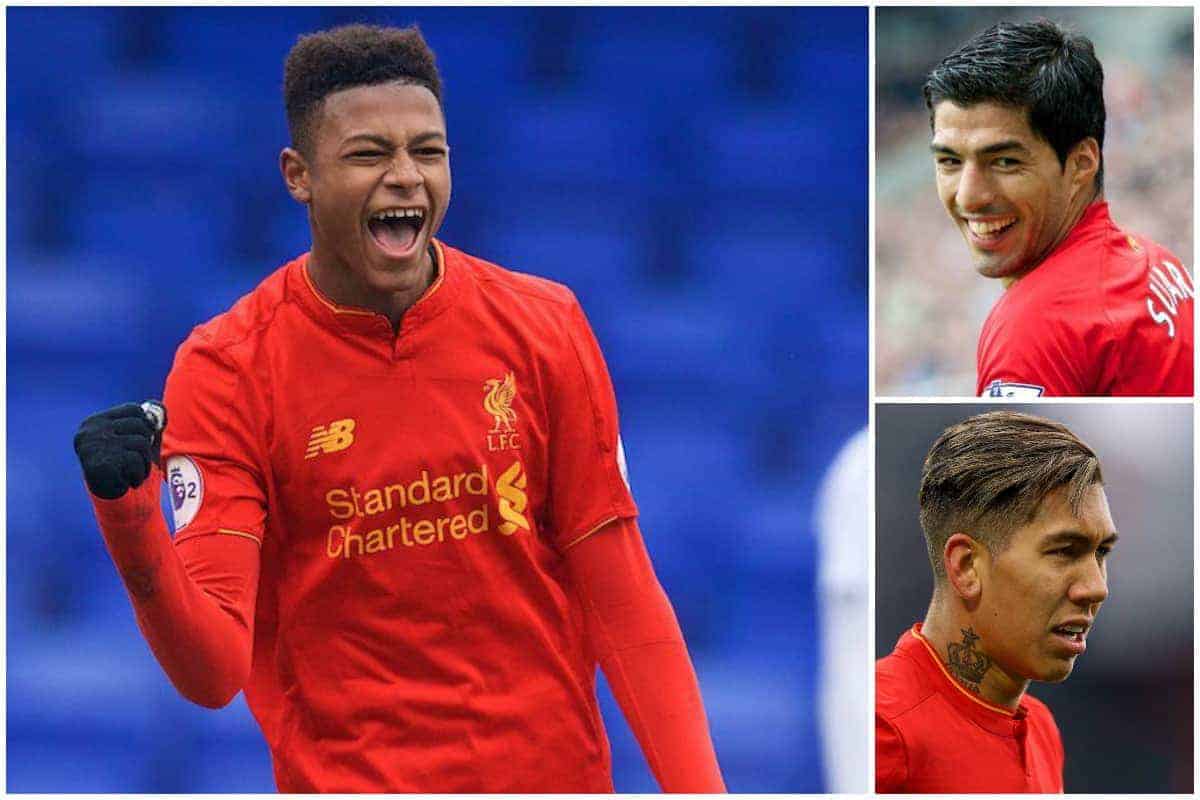 Brewster is enjoying a breakthrough 2017 in the Reds’ academy, moving from the U18s squad to the U23s to make a goalscoring debut against Ipswich Town in January.

The 16-year-old is a versatile, hardworking forward most comfortable up front, but also able to perform out wide or in a deeper attacking role.

This will likely endear Brewster to Jurgen Klopp, who has already praised the youngster for his development after watching him score a hat-trick in a behind-closed-doors friendly in November.

Klopp will be further encouraged by Brewster’s targets for the future, with the youngster explained that he hopes to emulate two of the club’s finest from recent years.

“Luis Suarez. I know he is no longer in the Premier League but what a player he was for Liverpool!” he said when asked who he looked up to.

“Suarez is amazing and I look up to him. His playing style is a bit like mine, quick feet, can score goals.

“And if I could play for Liverpool’s first team like him one day that would be amazing.

“[From the current squad] it’s got to be Roberto Firmino. I try and mimic the way he plays and try and be myself as well. Firmino is a team player and he scores goals.”

Brewster joined the Reds from Chelsea in 2015, explaining he “didn’t see a pathway to become a first-team player there,” with former U23s coach Michael Beale playing a key role in his move.

“There were a few clubs interested but once I knew Liverpool were one of them it was an easy choice,” Brewster recalled.

“Liverpool is a club that does give young players opportunities and it’s a great feeling to play for this club.”

His attitude is exemplary, as he explained that “if [making it at Liverpool] means not going out with my friends, eating well and working hard every day, that has to be done and I will do it.”

Beale praised Brewster in a recent interview with This is Anfield, speaking after his move to join Brazilian club Sao Paulo, saying he “has an outstanding future.”

“If you look at him he is very lean and very much like Trent [Alexander-Arnold] but two years younger,” he explained.

“Very lean and needs time to fill out but he is very quick and scores lots of different types of goals.

“His finishing is excellent and very clinical and calm. He is not just a No. 9, he can play 10 or on the sides and be equally effective. I think he has an outstanding future.”