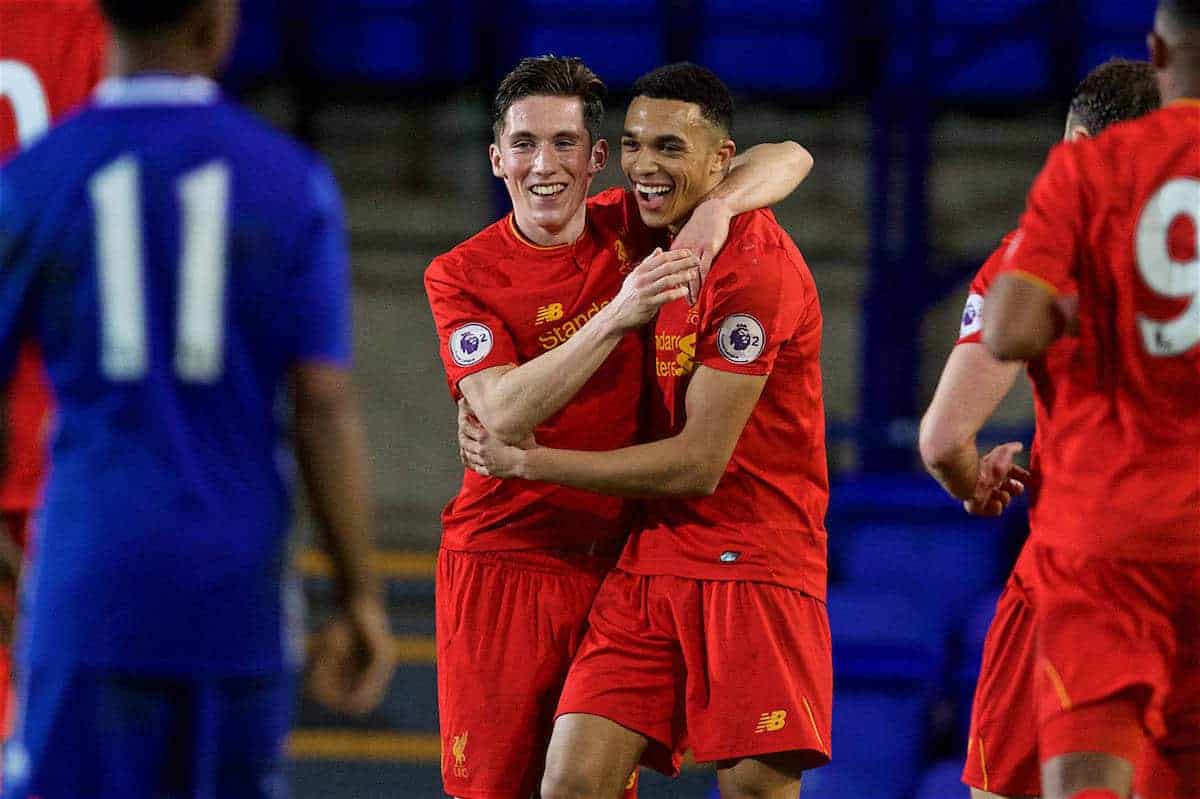 Dejan Lovren played 75 minutes for Liverpool’s U23s on Monday night, as goals from Harry Wilson and Trent Alexander-Arnold earned a 2-0 win over Chelsea.

It was reported earlier in the day that Lovren would feature prominently, and the centre-back started proceedings at Prenton Park, with Jurgen Klopp and Steven Gerrard watching on from the stands.

The 27-year-old had been ruled out of Liverpool’s 2-1 win over Burnley with a back problem, but this was seen as a good chance of nursing him back to health.

Mike Garrity named a strong starting line-up full of quality, as his side looked to build on last Monday’s 5-1 drubbing of Reading.

There were once again starts for Alexander-Arnold, Wilson, Joe Gomez, Marko Grujic, Sheyi Ojo, although Ben Woodburn didn’t feature, having come on against Burnley for the first-team.

Goalkeeper Kamil Grabara missed out through injury, with Caoimhin Kelleher replacing him, but 16-year-old striker Rhian Brewster did begin proceedings, following his double against Reading. A low-key start saw little to write home about, although one typically surging run down the right by Alexander-Arnold showed why many feel he could usurp Nathaniel Clyne as first choice right-back in the near future.

Wilson fired inches wide after a delightful one-two with Matty Virtue, as Liverpool enjoyed the better of the game, but Gomez made an important block to deny Josimar Quintero at the other end.

After 21 minutes, Liverpool were ahead. Another superb Alexander-Arnold run saw him brought down by Ruben Sammut inside the area, and Wilson converted his spot-kick ruthlessly to score his 25th goal of the season.

The remainder of the first-half was relatively incident-free, but it was a 45 minutes dominated by the outstanding Alexander-Arnold. Within seconds of the restart, the teenage right-back made another burst into the area, but his low cross was out of the reach of those in the middle.

Virtue skewed a shot wide after good work by Connor Randall, while Brewster made a blistering 60-yard run that displayed his frightening pace.

Grujic was enjoying an imposing performance in the middle of the park, as he continues to work his way back to full fitness, while Lovren was barely being tested at the back.

It was simply a matter of whether a second goal would come for Liverpool, with Chelsea hardly offering a thing on the counter-attack.

Brewster missed a good chance to double the lead, heading wide from Ojo’s pinpoint cross, but it wasn’t long before it was 2-0. It was Alexander-Arnold who got it, with the youngster curling an inch-perfect free-kick into the bottom corner, summing up his man of the match performance.

Wilson hammered a close-range effort onto the crossbar late in the day, but it did little to affect the final outcome at Prenton Park.

The victory keeps Liverpool third in Premier League 2, although Man City and leaders Everton have sizeable six and 11 point leads over them, respectively. They have both played a game more, though.

The night belonged to Alexander-Arnold, but Klopp will have been delighted to see Lovren come through the game unscathed, and Grujic and Gomez once again impress.