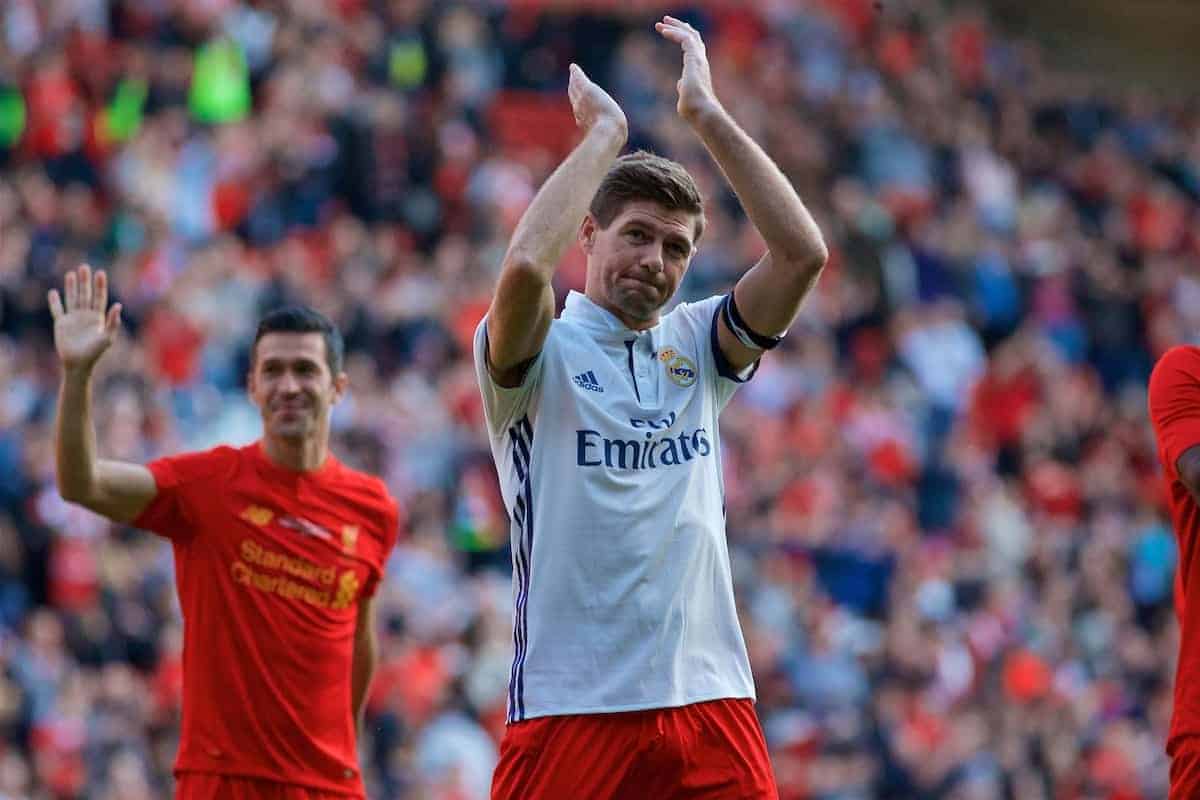 Gerrard stole the show as the Liverpool Legends team beat their Madrid counterparts 4-3 in an entertaining clash in aid of the LFC Foundation.

Gerrard, who recently took up a role on the Liverpool coaching staff following his retirement, had a hand in all four Reds goals—scoring one, setting up two and winning a penalty.

The 36-year-old also rattled a shot off the bar for good measure on a sunny afternoon when an adoring crowd urged him to shoot at every opportunity.

In his prime, Champions League-winner Gerrard was coveted by some of the game’s biggest clubs. Figo, a giant of Madrid’s Galactico era around the turn of the millennium, believes he would have fitted in well at the Bernabeu.

When asked if he would have liked to have seen Gerrard join him in Madrid, the Portuguese said: “The moment in life when we had the possibility to play together, that wasn’t possible.

“I think it is a pity because everyone wants to play with the best.

“I think Gerrard showed in his career he was one of the best footballers in his position.

“It was a pity but for Liverpool it was lucky because he could show his quality and talent here, at Anfield.”

Gerrard created the game’s opening goal for Michael Owen before also laying on another for John Aldridge.

He was awarded a penalty when he was brought down by former Reds team-mate Jerzy Dudek, who like Steve McManaman had a spell playing for both sides in the game.

The Kop called for Dudek to be sent off and Gerrard to take the spot-kick, but neither happened as the referee laughed off the appeals and Robbie Fowler then snatched the ball.

“He was going to take it but I pulled rank on him,” said Fowler, who jokingly gave the fans two fingers as they voiced sarcastic displeasure.

“I wasn’t going to give up that chance to score in front of the Kop.”

Gerrard also fired over from an overhead kick but did get his goal soon after, making it 4-0 with a volleyed effort.

Fowler, 41, who also hit the bar in one of his first public appearances since participating in reality TV show The Jump, said: “Steven is probably the last of us to retire. I think he was nailed on to get Man of the Match.

“You knew he would play well and be instrumental in all the good that we did.

“I don’t think anything surprises you. He is a fantastic player.” A game was preceded by a minute’s applause for Ronnie Moran, the long-serving former Liverpool captain and assistant manager who died this week.

Gerrard, speaking pitchside, said: “We’d like to mention Mr Liverpool, Ronnie Moran and dedicate this victory to him.

“It’s been a difficult week for the current players, the ex-players, the supporters, but none more so than Ronnie’s family.

“So on behalf of everyone at the club, we’re behind them and hopefully today’s victory cheers them up that little bit.”