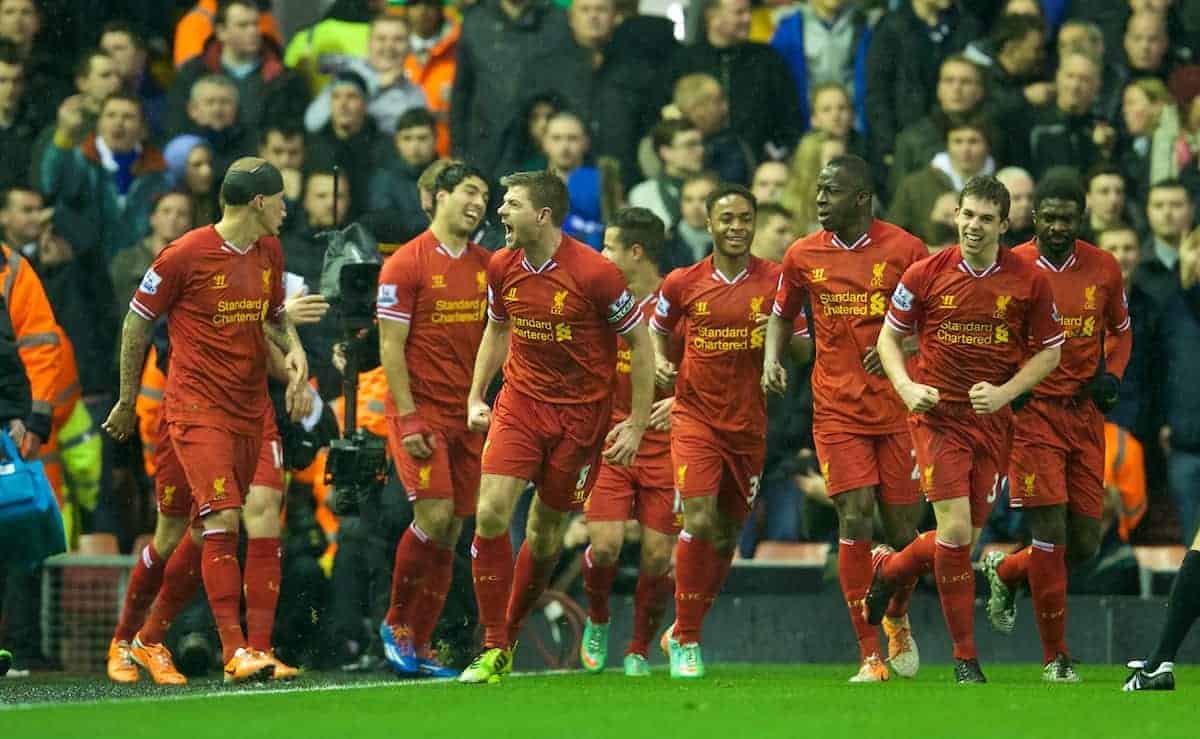 With the Merseyside derby imminent, we reminisce about the standout occasions in which Liverpool have got the better of Everton at Anfield.

The 228th clash between the Reds and their local rivals is sure to be full of the passion and drama we have become accustomed to over the years.

Liverpool will be looking to cement their place in the Premier League‘s top four, while Everton will be hoping to put some pressure on sixth-placed Arsenal.

The visitors are yet to win at Anfield this century, and it would be devastating to see that change on Saturday.

We’ve scrolled through the Premier League years and selected what we believe to be Liverpool’s top five home wins over Everton since 1992—do you agree?

A match that has become more famous for Robbie Fowler’s controversial behaviour than the game itself, this was actually an enthralling contest back in April 1999.

The home crowd was stunned within the opening minute, when Olivier Dacourt fired a powerful strike past David James, but as has so often been the case, Liverpool prevailed eventually.

Fowler’s penalty levelled the scores, with his white-line celebration in front of the Everton fans a dig at those who had often sung about his alleged drug use down the years.

To rub salt into Toffees wounds, Fowler got his second of the game to put Gerard Houllier’s side ahead, and Patrik Berger’s second-half effort made it 3-1.

Francis Jeffers’ late goal ensured a nervy finale, and it was left to an 18-year-old Steven Gerrard to make two vital goal-line clearances in the dying moments. He never looked back in this fixture. Speaking of Gerrard, this was his most memorable night against the club he grew up loathing—certainly on an individual level.

Kenny Dalglish’s Reds didn’t have a huge amount to play for going into the game, but by the end of the night, they felt like champions.

Gerrard opened the scoring with a beautiful lobbed effort, and he finished clinically in front of the Kop to double the lead early in the second half.

Having already teed him up for his second goal of the night, Luis Suarez provided the midfielder with a tap-in for his hat-trick, making him the first player to net a treble in a Merseyside derby since Ian Rush in 1982.

A month later, Liverpool again got the better of Everton, with Andy Carroll’s late header in the FA Cup semi-final heaping more misery on them. This pretty much sums up the battering Liverpool gave their neighbours in a balmy match last season—there has rarely been a more one-sided derby clash.

Jurgen Klopp‘s Reds annihilated Roberto Martinez’s helpless side, winning 4-0 on the night and having 37 shots to Everton‘s three.

Divock Origi, Mamadou Sakho, Daniel Sturridge and Philippe Coutinho got the goals—Ramiro Funes Mori was also sent off for a horrible tackle on Origi—and the only disappointment is that Liverpool didn’t score more.

Lucas Leiva even tried his luck at one point, although his shot was so woeful that Klopp was left in hysterics on the touchline. That summed up the night.

On paper, this may not look as impressive as the aforementioned mauling of Everton last season, or even the Gerrard-inspired victory of five years ago, but it was a belter of a win.

What made it so glorious was that Gerrard’s first-half sending off sent the travelling Everton supporters into ecstasy, such was his presence in this fixture.

They were sure they had their first Anfield victory in seven years sewn up, only for them to realise they are Everton and capitulate completely.

Phil Neville, of all people, headed into his own net to give the 10-man Reds the lead on the stroke of half-time, and just after the break, Luis Garcia coolly made it 2-0.

Tim Cahill gave his side hope with a header, but Andy van der Meyde’s red card and Harry Kewell’s emphatic strike ensured yet another win for Liverpool. This has to top the pile, doesn’t it?

The football that Liverpool played in 2013/14 was out of this world at times, and the way in which they destroyed their rivals in January 2014 was a sign that they were genuine title challengers.

Gerrard powered home a header to give the hosts the lead, before Sturridge scored twice in three minutes to make it 3-0 at the interval.

The second of Sturridge’s goals was an outrageous lofted finish over the head of Tim Howard, and he and Suarez’s celebration in front of the Everton fans was a particularly enjoyable moment.

It was left to Suarez to put the icing on the cake with a slick finish, and although Sturridge blew his chance of a derby hat-trick after skying a penalty, it didn’t affect the mood inside Anfield.

Let’s hope for more of the same on Saturday.