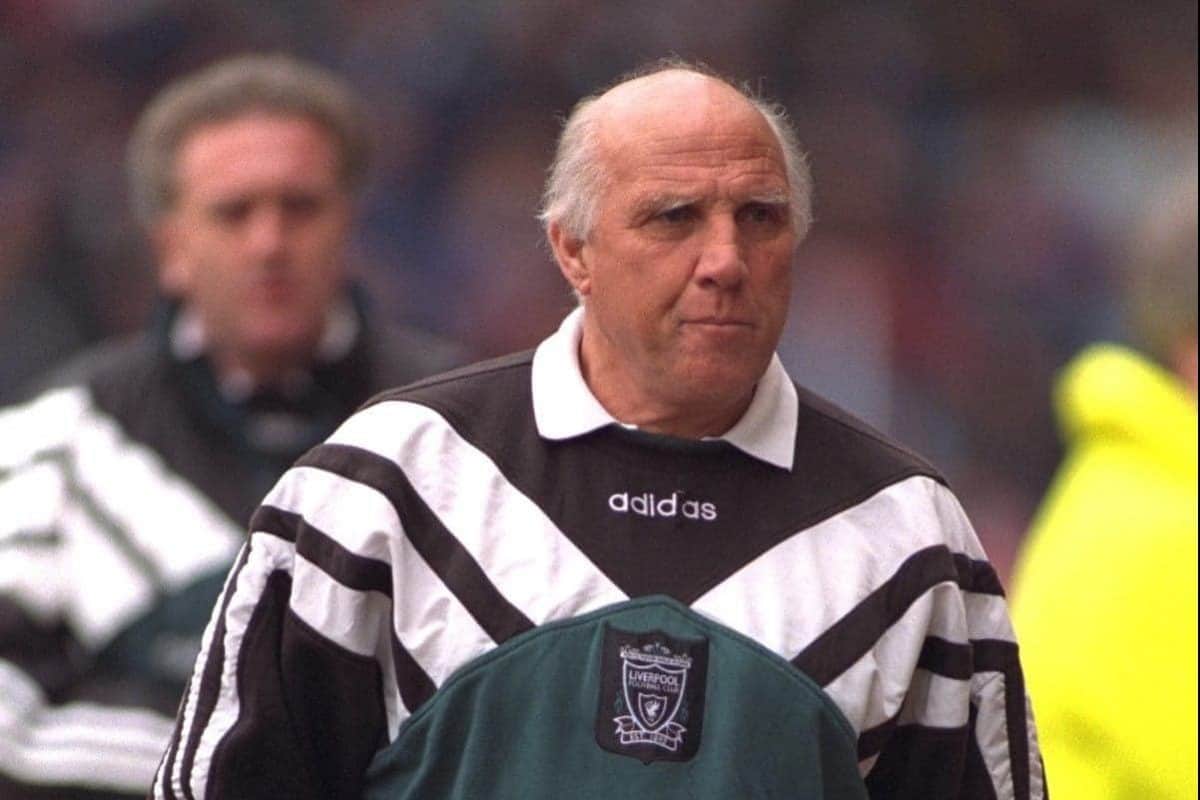 Tributes have flooded in for Liverpool legend Ronnie Moran, after he passed away following a short battle with illness on Wednesday, aged 83.

Moran served Liverpool Football Club for 49 years, beginning as a player and retiring as a coach in 1998, as the Reds’ longest-serving employee.

He became known as Mr Liverpool, and is undeniably one of the club’s most legendary figures, having served under the likes of Bill Shankly, Bob Paisley, Joe Fagan and Kenny Dalglish.

Bugsy’s son, Paul, confirmed his passing away on Sunday morning, with his family “devastated”:

And on the news of Moran’s death, players, journalists and supporters all paid tribute to Mr Liverpool:

Liverpool Football Club is deeply saddened by the passing of Ronnie Moran pic.twitter.com/YsCbabUWkp

We are deeply saddened at the passing of a Merseyside football great, Ronnie Moran. Our thoughts are with his family and friends. pic.twitter.com/RHEgtxOKbA

Very sad news with the passing of Ronnie Moran this morning, a legendary figure @LFC & learnt me & others an awful lot. R.I.P.

Gutted to hear that Ronnie Moran has passed away. A true footballing man who gave me great advice. RIP #YNWA

Absolutely devastated to here the news of Ronnie Moran I will be forever indebted to him for my time @LFC the man's a true legend god bless.

It's a sad day in Football! RIP Mr. Liverpool #RonnieMoran you will be greatly missed! @LFC

Terrible news to hear of the passing of Ronnie Moran. A huge influence on the great teams of the 60s 70s and 80s. RIP Bugsy

The man who decided at 18 I should play centre back before anyone else had even thought of it.
Thank you Bugsy! #LFC pic.twitter.com/xYOQ5xBXk3

I'm deeply saddened by the death of Ronnie Moran. A true gentleman who dedicated his life to #LFC . The game has lost one of its true greats

Phil Thompson: "Make no mistake, Ronnie Moran deserves to be mentioned in same breath as those great icons Bill Shankly and Bob Paisley."

RIP Ronnie Moran. Gave 49 years service to Liverpool; from 10 years before Shankly arrived through to the late '90s. A true LFC legend.

He was walking around Melwood everyday !! He couldn't be far from the pitch where he belonged. @LFC greatest Ronnie Moran RIP.

Very sad to wake to the news of Ronnie Moran passing away. A legend @LFC will be greatly missed. #LFC #YNWA #rip

Saddened to hear of Ronnie Moran's passing, a giant of #LFC and British football. Condolences to family, friends and all @LFC. #YNWA

So sad to learn that Ronnie Moran passed away last night. A truly pivotal figure @LFC during the most successful years in their history.

R.I.P To A Real @LFC Legend Ronnie Moran.Thoughts go out @paulmoran62 Julie and all the family.#YNWA

One of the greatest Merseysiders. Rest in peace, Ronnie Moran. pic.twitter.com/qnckMRs0j3

RIP Mister Liverpool – the golden thread through all the glory years… https://t.co/qrCjpZT3CA

RIP Ronnie Moran. Desperately sad news but what an impact he had on #lfc for over 50 years. A true great.

Very sad to hear of Ronnie Moran's passing. Not many have had the influence on shaping football like he did. Great man & great football man

Sad news this morning with the passing a true Liverpool legend, Ronnie Moran. He served the Reds under 9 managers. RIP Mr Liverpool. pic.twitter.com/1emnz9G3ot

Liverpool's next game is Everton at Anfield. There just has to be a mosaic for the late great Ronnie Moran at the derby. #liverpool #lfc pic.twitter.com/LK9sRJZc1b

What we achieve in life echoes in eternity. R. I. P. Ronnie Moran pic.twitter.com/5EUatE1kVy

What a servant to #LFC He saw it all. RIP, Ronnie. pic.twitter.com/nWVBZUi5eT

Ronnie Moran leading Liverpool, his Liverpool, out at Wembley for the 1992 cup final. Rest in Peace to the man who epitomised it all. pic.twitter.com/i7rdvf6rfP

RIP Ronnie Moran. One of our true greats. pic.twitter.com/LKrJOoebrN

So sad to hear Ronnie Moran, "Mr Liverpool", has passed away. Impossible to measure his influence on #LFC and its players, a true legend. pic.twitter.com/a5AvEb4wvj

RIP Ronnie Moran. A Liverpool giant who helped turn the club into a bastion of invincibility. He stands alongside Shankly, Paisley and Fagan pic.twitter.com/N3ZepiRwAG

You'll see many a Ronnie Moran tribute from former Liverpool players today no doubt, but this one from Fergie (via @LFChistory) sums him up. pic.twitter.com/YSKodjXnNB

To me he will always personify LFC. A huge chunk of the club dies with him. RiP Ronnie Moran.