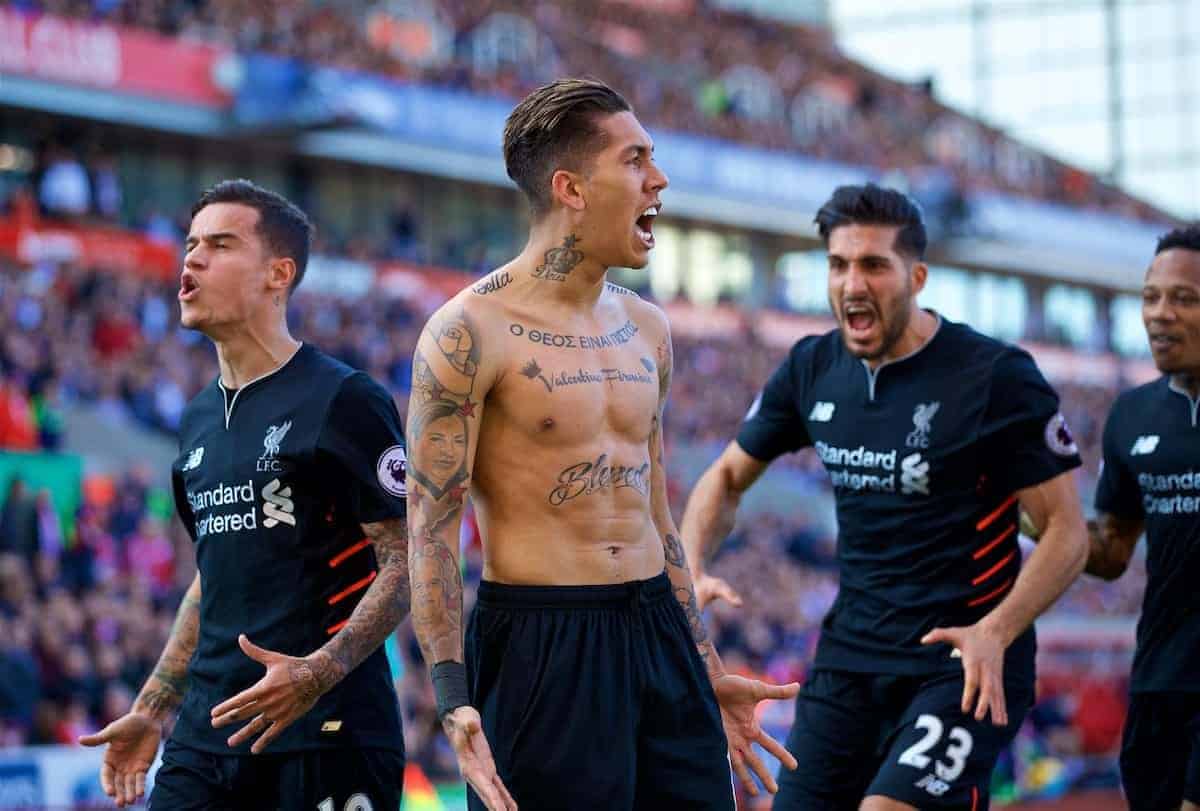 Liverpool fought back to earn a much-needed victory against Stoke on Saturday afternoon – a win that feels bigger than just a 2-1.

The Reds were without a number of key players including Jordan Henderson, Sadio Mane, Adam Lallana and Philippe Coutinho – who only made the bench.

They were boosted by the return of Joel Matip to the starting line-up though, while there was a full league debut for Ben Woodburn.

Roberto Firmino also had to settle for a place on the bench alongside Daniel Sturridge.

It wasn’t the start Liverpool hoped for as Jonathan Walters broke the deadlock for Stoke shortly before half-time – moments after a stonewall penalty wasn’t given for the visitors.

There were several changes made in an attempt to make a difference in the second half as Liverpool search for an equaliser. Coutinho and Firmino replaced the two youngsters and the Brazilian duo proved key.

The Reds’ No.10 and No.11 made a difference almost immediately as they both got their names on the scoresheet to put Liverpool in the lead.

Stoke couldn’t find a reply and Liverpool held on to a tight lead – most notably thanks to Simon Mignolet‘s superb save within 90 seconds of going 2-1 ahead.

Here are all the best reactions from Liverpool supporters on social media as they held on to a 2-1 lead;

There were mixed opinions to see Woodburn and Alexander-Arnold start…

Big day for both Trent Alexander-Arnold and Woodburn. Great chance for the both of them to impress.

We're a decent attacker on for Woodburn away from looking better on the counter, and a decent centre back away from being more solid

How does a 43-year-old Walters bag against us every single time he plays us. Becomes Messi with strength. Infuriating.

Terrible terrible marking by Klavan there, completely at fault for that goal, out of position, misses the challenge, goal. #LFC

“What a beautiful ugly win!”
– NorseDweller on the forums.

Clearly the boys didn't want to feel my wrath…coutinho and firmino stepped up to the plate and delivered…big time. Thank you.

“Our defence is unreliable though our attack should be credited”
– Navin Ramnoth on the forums.

Not a vintage performance by Liverpool, saved by 2 cracking goals! 3 points feel sweeter when you're not at your best!

Fair play to Jurgen Klopp. Got his subs wrong in midweek but they were absolutely spot on today. Changed the game for us.

“Biggest win of the season!”
– Ankit YNWA on Facebook.

“This is the kind of determination we need at Liverpool.”
– Kiprotich Evans on Facebook.

Massive win that, two brilliant saves by the Mig. Take a bow son.

The Brazilians were brilliant when they came on, but Emre Can was a real leader in that 2nd half. Hitting form at just the right time.

We’ll leave you with this rather brilliant stat:

Roberto Firmino has been booked more times (7) for 'excessive celebration' since 2012/13 than any other player in Europe's top 5 leagues. pic.twitter.com/DfCO81fGEp