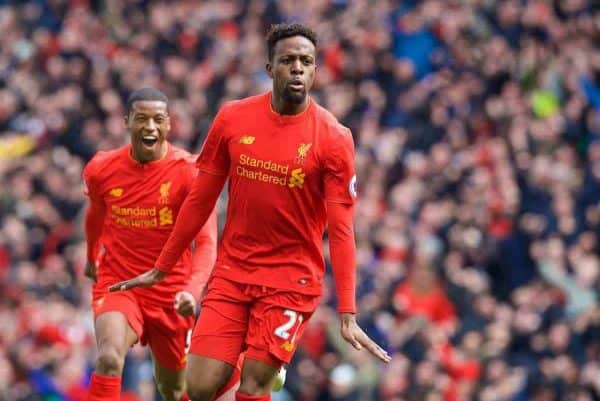 Divock Origi has taken up a place in Jurgen Klopp‘s starting lineup, as Liverpool take on Bournemouth at Anfield on Wednesday night.

Origi scored the third goal of Liverpool’s afternoon as they sealed a 3-1 victory over Everton on Saturday, having replaced the injured Sadio Mane early on in the second half.

Klopp has made two changes to his side from the Merseyside derby, as the Reds look to take revenge on Bournemouth following December’s 4-3 defeat at Dean Court.

Simon Mignolet continues in goal, behind a back four of Nathaniel Clyne, Ragnar Klavan, Dejan Lovren and James Milner.

Klavan takes the place of Joel Matip, with the centre-back having suffered from back problems at the beginning of the week.

In midfield, with both Jordan Henderson and Adam Lallana ruled out, Lucas Leiva keeps his place alongside Emre Can and Liverpool’s Player of the Month for March, Georginio Wijnaldum.

And with Origi filling in for Mane in attack, the Belgian joins regulars Philippe Coutinho and Roberto Firmino in Klopp’s three-man unit.

Klopp has been boosted by the return to fitness of Daniel Sturridge, with the striker and Matip named on a youthful substitutes’ bench alongside Trent Alexander-Arnold and Ben Woodburn.

Liverpool vs. Bournemouth is not being televised in the UK. The best way to keep up to date with the match is on the This Is Anfield app for iPhone and Android, where there’ll be team news, a live blog and match reaction. It’s free to download here.