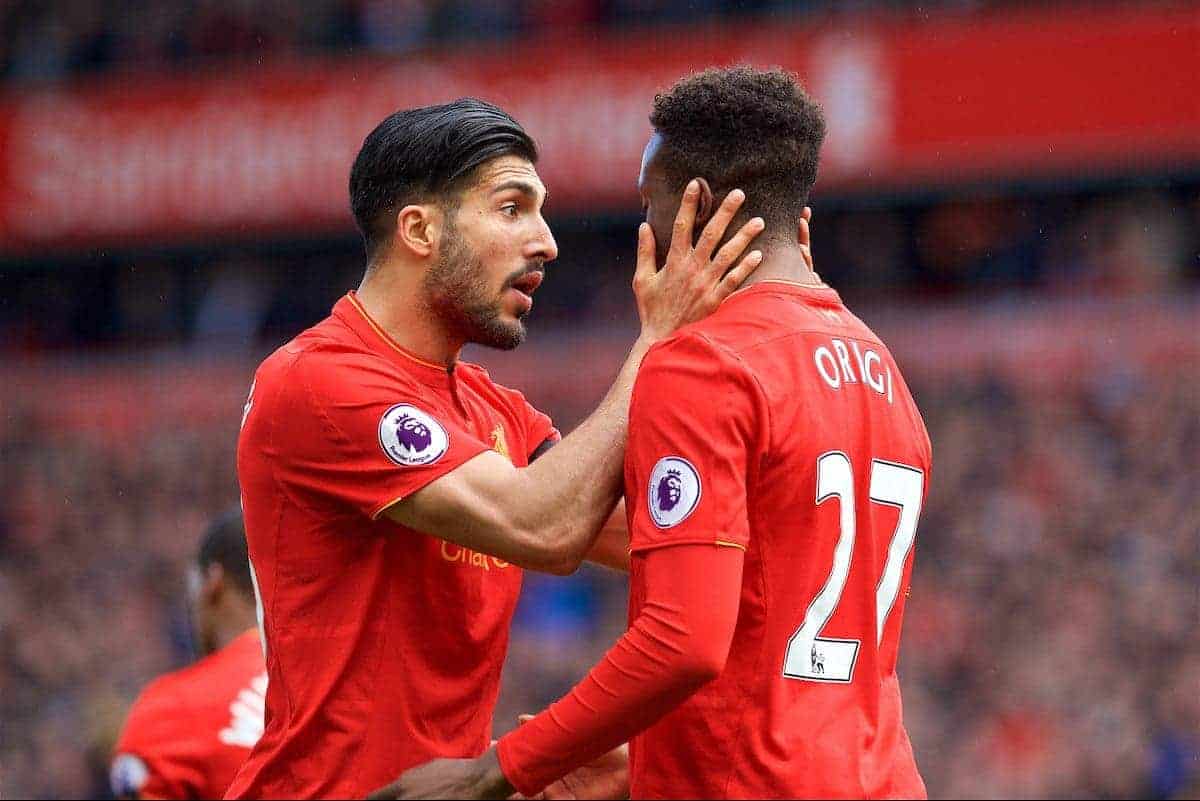 Midfielder Emre Can is confident Liverpool are back to their best after the mid-season slump which derailed their title bid.

The comfortable 3-1 victory in the 228th Merseyside derby made it 10 points from the last 12 and included wins over Everton, Arsenal and Burnley and a draw at Manchester City.

It strengthened their spot in the top four and with all the other Champions League-chasing teams having to play at least one other of the top six—Liverpool have no remaining opponents currently above eight place—there is the opportunity for the Reds to further consolidate.

“It has not been secured [with this result] but it is our target to play in the Champions League,” said Can.

“In December, January and February was not our best football but now we are back, we did it in the last couple of games.

“It was very important to win that game. There are still eight games to go and we have to keep it up.”

In truth Liverpool did not have to play that well to beat Everton, whose last victory at Anfield came in 1999 and who suffered more than most from injuries on international duties.

Ronald Koeman tried to compensate for the loss of right-back Seamus Coleman to a broken leg and centre-half Ramiro Funes Mori to a season-ending knee injury by switching to a three-man defence in which saw Matthew Pennington made his first appearance of the season.

The 22-year-old academy graduate, in only his seventh senior appearance and first derby, had a mixed day as he scored from close range to equalise a superb individual goal from Sadio Mane but was terrorised by a resurgent Philippe Coutinho at the other.

Liverpool’s mercurial Brazilian put his side ahead with a trademark effort and after the break Divock Origi, replacing Mane who went off with suspected knee ligament damage, swept home the third.

Coutinho has struggled for form since returning from an ankle problem in January but his display suggested he has rediscovered his sparkle—impressive after a long trip from World Cup qualifying in South American even if the club did charter a private jet to bring back him and compatriot Roberto Firmino.

“We spoke a lot about the national team and said it’s not so cool that they had to leave wherever to go wherever,” said manager Jurgen Klopp.

“It was a world-class goal, another fantastic finish and he made the pass for Div’s goal.

“He had a really, really good game; really good for us and he was not happy when I took him off.

“I like his desire but I thought in this game it makes sense that when you’ve already lost one offensive player, you save another one a little bit.”

The result put six points between themselves and fifth-placed Manchester United, who were held to a goalless draw at home to West Brom and with fourth-placed Manchester City playing Arsenal on Sunday at least one of the chasing teams has to drop points.

That should help Liverpool’s cause, although Klopp is taking nothing for granted.

“Hopefully we can stay in this optimistic mood and can get there.

“It’s difficult, of course. So far we have played a really good season, but it’s not finished so we have to carry on.”