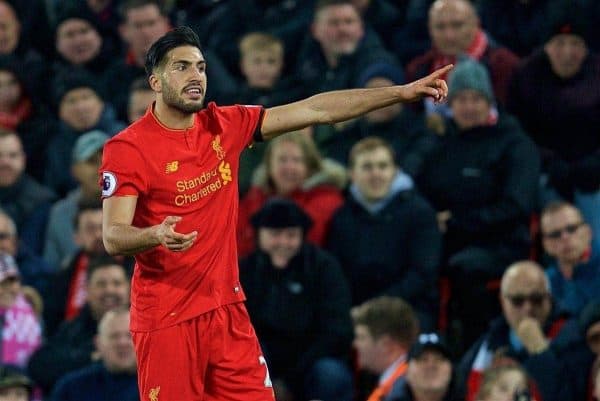 Liverpool gifted Bournemouth a late equaliser at Anfield on Wednesday night, with the majority of Reds players not at their best.

Mignolet’s form has been largely good of late, but he was a very frustrating figure at Anfield.

Some nervy early footwork lost all the early momentum Liverpool had – Bournemouth scored soon after – and his ponderous nature on the ball was evident a number of times.

The Belgian couldn’t be blamed for not saving Benik Afobe or Josh King’s strikes, and made no handling errors, but he was not always Mr Popular on Wednesday evening.

We could copy and paste so many Clyne ratings this season!

Once again, the birthday boy was solid but unspectacular, offering decent defensive cover but not enough thrust in the final third.

That said, he was better going forward in the second-half, with one superb effort smashing against the crossbar.

After a good performance in the Merseyside derby, Lovren was less impressive this evening.

Although he didn’t do too much wrong, he looked shaky at times in tandem with Mignolet and Ragnar Klavan, and he was given a tougher evening by Afobe than Romelu Lukaku on Saturday.

The Estonian came in for the injured Matip, but this was one of those displays that makes you realise he should be fourth-choice centre-back.

Like Mignolet and Lovren, he was sloppy in possession too many times, and his lack of pace sometimes looked an issue when Bournemouth counter-attacked. Could have done better for King’s late equaliser.

After an alarming dip, Milner has played much better in recent weeks, and he did well up against former Reds winger Jordon Ibe.

The veteran offered more going forward than of late, even if his crossing was a little hit-and-miss, and his use of the ball was generally very reliable.

Milner still doesn’t represent the long-term solution at left-back, but he was good against Eddie Howe’s side.

Another who was superb against Everton, Lucas was quiet but relatively effective.

The Brazilian glanced an early effort wide of the target, and aside from picking up a trademark yellow card, he did his job in a professional manner.

Jurgen Klopp could have done with a little more guile from him, and he was possibly a little fortunate not to pick up a second yellow.

After an excellent month or so, Can didn’t quite manage to take the game by the scruff of the neck this time around.

His all-round game appeared a little more messy than it has been, and his general influence was well short of what we witnessed in the games against Arsenal, Man City and Everton.

You couldn’t fault Can’s effort levels, but there was not enough quality on show.

Wijnaldum was not at his best against the Cherries in the first-half, failing to dominate the midfield battle as consistently as he has in the last few matches.

His dreadful backpass allowed Afobe to give Bournemouth an early lead, but he did redeem himself after the break.

The 26-year-old was far more noticeable in all facets of his play, and his superb assists allowed Divock Origi to make it 2-1.

For a while on Wednesday evening, it looked as though we were going to see one of those infuriating Coutinho displays, but he came to life after a quiet opening.

The 24-year-old came close with a dipping free-kick, before his lovely finish brought Liverpool level shortly before half-time.

He always looked like making something happen with his magic, before his surprise substitution midway through the second-half.

Like so many, Firmino was never at his fluent best.

He was also guilty of losing the ball too much, however, and he needed to offer more in terms of a goal threat.

Having enjoyed an impressive goalscoring cameo against Everton, Origi came in for the stricken Sadio Mane.

The young striker was Liverpool’s best player at Anfield, and he looks to be returning to the form of this time last year.

He missed a great chance at the back post in the first-half, but he headed home Wijnaldum’s cross and looked a real threat all evening. Much better.

The Cameroonian did nothing wrong but didn’t have the desired influence in a back-three.

Not the greatest night for Klopp, by any means.

In fairness, he could do little about Wijnaldum’s error putting Liverpool behind, and the Reds did well to turn the game around.

The manager’s decision to take off Coutinho for Matip was a strange, negative one, though, and it played right into Bournemouth‘s hands. We know Liverpool can’t park the bus, so deciding to made little sense.