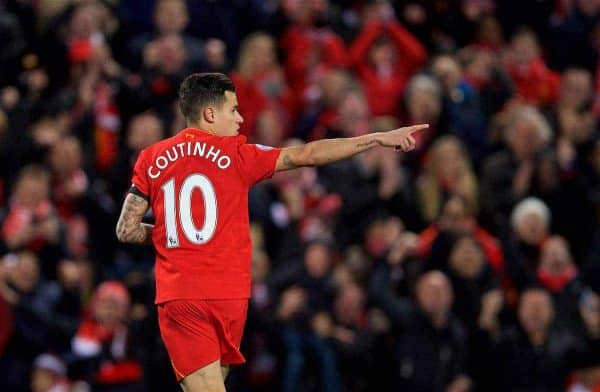 Jurgen Klopp reveals why he subbed Philippe Coutinho vs. Bournemouth

Jurgen Klopp has revealed he was forced to substitute Philippe Coutinho on the hour mark in Wednesday’s 2-2 draw with Bournemouth due to illness.

The German’s decision to withdraw Liverpool’s opening goalscorer at Anfield was widely criticised by supporters, as the Reds conceded late to drop two points.

Klopp’s choice of replacement, Joel Matip, saw the home side move to a five-man defence.

But this was not enough to hold off Bournemouth, as Josh King struck an 87th-minute equaliser.

However, while Klopp certainly could have opted for a more progressive substitution, he revealed after the game that Coutinho’s departure was unavoidable.

“We had to change Phil because he felt sick at half-time,” Klopp told reporters at Anfield.

“He says he feels better now but it is clear when he makes the sign he has to change.

“[There is] no joy when you have to take off your best player. He played really well.”

Explaining why he brought on Joel Matip, and not Daniel Sturridge, Klopp said: “We took Phil off and it was for sure too early for Daniel.

“Div did really well in the centre.

“We are usually really brave in situations like this but we thought it made sense to have one more defence protection and still have room on the wings for Clyney and Milly. That is how we actually scored for sure the second goal.”

This serves as a minor encouragement after a bitter result, with Coutinho at least not joining the likes of Jordan Henderson, Adam Lallana and Sadio Mane on a growing injury list.

Mane is expected to undergo surgery for a knee injury picked up in Saturday’s Merseyside derby, and was spotted on crutches at Anfield on Wednesday night.

Meanwhile, Henderson has seemingly returned from a rumoured trip to Miami, with the captain pictured watching from the stands alongside Harry Wilson.