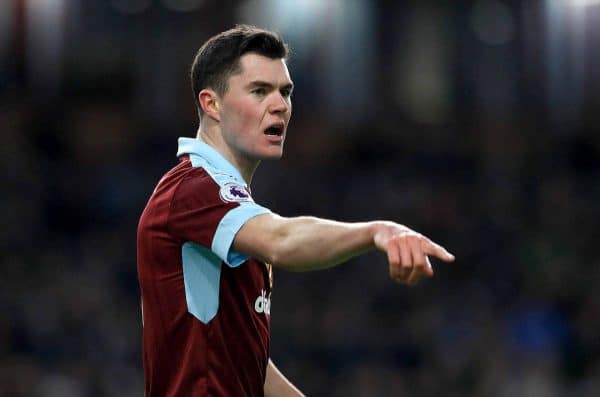 Liverpool are believed to have taken the advantage in the race to sign Burnley centre-back Michael Keane, despite interest from Man United.

Keane has fostered a strong reputation over his three seasons with the Clarets so far, and earned his first England cap against Germany in March.

The 24-year-old is set to be one of the most in-demand players on the Premier League radar this summer, with the Reds among those touted with a big-money bid.

And with Jurgen Klopp in need of at least one more centre-back ahead of the 2017/18 campaign, Liverpool are said to have made progress in their efforts to sign Keane.

According to ESPN‘s United correspondent Rob Dawson, Klopp’s side have “the upper hand” over their northwest rivals.

This is due to Keane’s “unhappy” departure from Old Trafford back in 2015, due to Louis van Gaal’s poor treatment, and he would need “convincing” to return to United.

Both Man City and Everton are also credited with an interest in Keane, but Liverpool are held up as his most likely destination.

Klopp is certainly in the market for another centre-back, with Southampton‘s Virgil van Dijk and Napoli’s Kalidou Koulibaly his other reported targets.

Keane would be far from a blockbuster signing like Van Dijk, but he would certainly bring qualities that could improve the Reds’ defence.

He is a strong defender on a fundamental level, but is also comfortable with the ball at his feet, and looks capable of making the step up to the next level.

In an ideal world, Keane would arrive to supplement one of Van Dijk or Koulibaly, with neither Joel Matip or Dejan Lovren able to find consistency in their fitness this season.

Ragnar Klavan, Lucas Leiva and Joe Gomez are Klopp’s other options at centre-back at present, but only 19-year-old Gomez has a long-term future at Anfield.

Burnley are believed to be seeking a fee of around £20 million for Keane, and if Liverpool were to sign both him and Van Dijk, this would mean an outlay of £70 million on two centre-backs.

This would be a bold move, but one that is necessary, and would be offset by a hopeful £30 million departure for Mamadou Sakho.