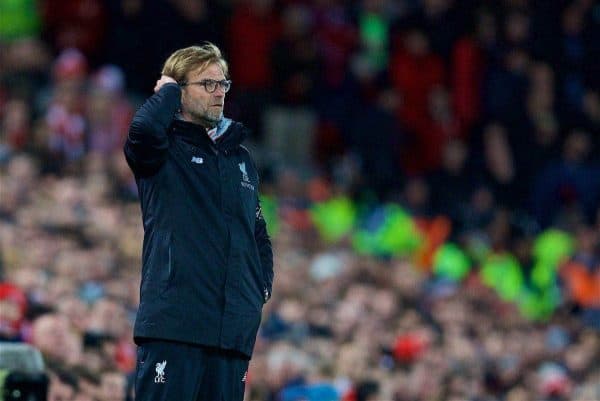 A lackadaisical Liverpool could only claim a point having had three in their hands, missing an opportunity to make their top four position more secure.

In a repeat of the situation in January when Sadio Mane was missing from the side, Liverpool have to find a way to be effective without him.

Thanks to a lack of January business, the possible solutions are the same as they were a couple of months ago. Klopp began with one he used on the odd occasion earlier in the year, which was to play Roberto Firmino on the right.

This certainly isn’t the Brazilian’s most effective position, but you get similar things from him wherever he plays. Hard work, a reasonable goal threat, and his link with Philippe Coutinho.

This link led to the first Liverpool goal. Firmino latched on to a loose ball after Origi’s header before sending Coutinho in one-on-one with Artur Boruc.

Firmino played all three attacking positions at some point in the Merseyside derby, so is obviously the go-to player when versatility is needed.

But though he was one of the better performers on the night, but there’s still a lack of zip when Mane doesn’t play, which will need remedying this summer.

Could Origi be Liverpool’s top scorer this season?

While Firmino may have placed Mane in terms of position, the player who came into the team, as was the case against Everton, was Divock Origi

The Belgian scored the third goal in the Merseyside derby having replaced Mane, and he was on target again against Bournemouth.

This goal took him to ten in all competitions this season, just three behind Liverpool’s top scorer, Mane, and level with Firmino.

Given the run of games to come, and the likelihood that he’ll play some part in all of them if fit, you wouldn’t bet against him matching Mane’s tally, and possibly overtaking him.

Trying and failing to win ugly

Prior to this game Klopp discussed a win at all costs attitude within the team going into their top four battle.

“It’s the part of the season when decisions will be made about where we will finish. It’s not about playing the best football in the world, it’s about getting results.

“We have to think about defending all together and making life as difficult as possible for our opponents.”

His move midway through the second half to replace Coutinho with Matip summed up this mindset. It led to a change in formation as the Reds looked to hold on to a 2-1 win by going to three at the back.

This backfired, however, as a confused scuffle in the box led to a Bournemouth equaliser.

Did the extra defender in a fairly unfamiliar system add to this confusion? Maybe. But either way Klopp’s plan to win ugly just ended with an unattractive equaliser.

Breaking up the defensive partnership, again

Mane’s absence was expected, but the breakup of a defensive partnership which impressed against Everton came out of the blue.

It’s safe to say that Joel Matip is the player around whom Liverpool’s defence is built, so when he’s out of the side questions are always asked of his replacements.

His absence effectively forced two changes. Dejan Lovren has to shift over to the right side of the pairing, and Ragnar Klavan comes into the side on the left.

The introduction of Matip in the second half only confused matters further. If he was fit enough to come on, then why didn’t he start? Klopp said post-match that his back injury had prevented him from training fully.

The equalising goal came as Klavan lost his bearings while trying to handle King. He lost the ball and the man as the Bournemouth attacker engineered space to shoot past Simon Mignolet and claim a point for his side.

It took Liverpool a considerable amount of time to settle into the game, and there’s an argument to say that they never really did.

“The start was not good,” summed up Klopp after the game, going on to describe his players as “a bit late in mind.”

The early sloppiness was summed up by the first goal they conceded when Georginio Wijnaldum‘s thoughtless back-pass put Benik Afobe in to score the game’s opener.

But the Dutchman wasn’t the only one contributing to the side’s sloppiness, and the majority of the eleven had their own poor moments.

Passes were played behind their intended targets rather than at or in front of them, players were drifting out of position and out of the game, and on one occasion Marc Pugh was given the freedom of the area to attempt a volley from a corner which he was unlucky not to score from.

Either side of half time the team momentarily awoke from their slumber, but they drifted off again at the all-important moment towards the end of the game.

This lapse allowed the visitors to score their equaliser, and a chance to take three important points was thrown away at the last.