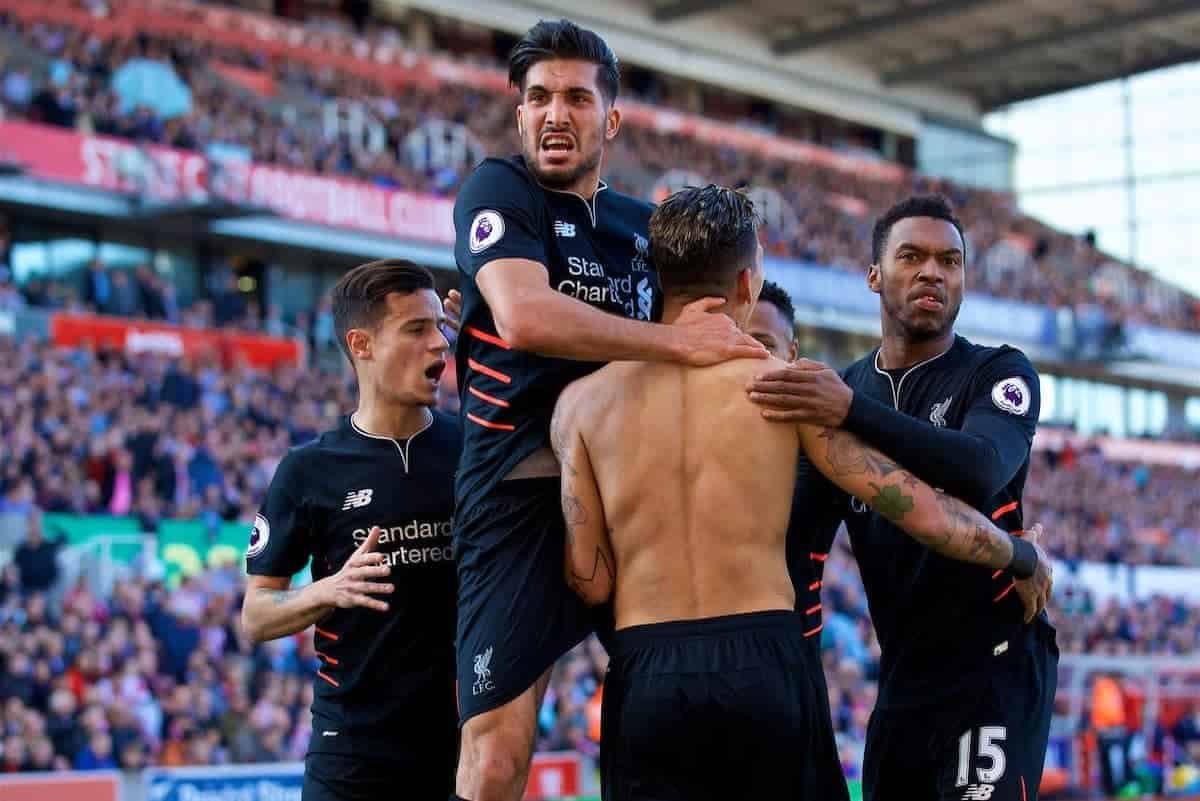 Liverpool produced a hallmark Jekyll-and-Hyde performance as they fought back to secure a priceless 2-1 victory away to Stoke City on Saturday.

Despite Stoke enjoying the best of the chances in the first half, Mignolet had a relatively quiet opening 45 minutes, but was called into action shortly after the break.

The Belgian managed to get low and make an incredible save to deny Charlie Adam from point-blank range, and then made another with the Reds 2-1 up to stop Saido Berahino. Phenomenal.

Having been expected to occupy either a central berth in midfield or a wider duty in attack, Alexander-Arnold was deployed in a more regular position at right wing-back.

Was targeted by the Potters’ attack, with Marko Arnautovic seeing a lot of the ball, but was excellent driving forward, with his delivery from the right-hand side always threatening. Jurgen Klopp‘s questionable three-man defensive system endured at the Britannia, with Matip coming in between Dejan Lovren and Ragnar Klavan in a progressive role at the back.

It was difficult to pin down quite why the No. 32 was on the pitch until the closing stages, however, with the Reds’ backs-to-the-wall approach undermined by some shoddy positioning.

Lovren can often look heroic when Liverpool are under the cosh, as they certainly were at times on Saturday, but this time around he dissolved into the frantic.

Most notably poor was his contribution to Jonathan Walters’ first-half header, losing the Irishman in the box and making little effort to get back into position.

A flawed display, but he played his part as the Reds held on at the death.

Klavan found himself in worrying form in Wednesday night’s draw with Bournemouth, but retained his place in the starting lineup with Klopp looking to shut up shop against the Potters.

The Estonian didn’t shower himself in glory on Saturday, either: culpable for the opener, arguably warranted a red card for two bookable offences and struggled to gain any composure throughout.

Clyne took up an unorthodox position at left wing-back on Saturday, with the 26-year-old accommodating his youthful counterpart, Alexander-Arnold.

He struggled to find the balance in the first half, but certainly improved after the break, providing a constant outlet moving forward in his natural role on the right as the Reds gained control. Having established himself as Liverpool’s first-choice left-back this season, Milner found himself back in his favoured role in the middle of the park at the Britannia.

Like Matip, it was difficult to quite pinpoint where Milner was for much of the first half, but normal, stable service resumed when he adopted his now-customary duty when Alexander-Arnold came off.

Another bullish, industrious display from Can, who clearly enjoys a midfield battle—particularly now he is fit enough to dominate one.

Particularly telling was how the German grew in confidence as the game went on: instead of tiring as he has done at times this season, he found a new level of urgency. Now a real asset. Wijnaldum played an interesting role alongside Can in midfield, with the Dutchman’s more adventurous approach finding himself overlapping more regularly in the final third as the game wore on.

Almost gifted Stoke a second goal of the night with a bizarre header in the penalty area, but moving forward he certainly redeemed himself. A tidy, invaluable presence.

Saturday marked a big day for Woodburn, making his full Premier League at the age of 17 years and 175 days, with only Jordon Ibe and Michael Owen younger when they made their top-flight bow for the Reds.

Found himself performing a thankless task dropping deep to influence play, but was central to Liverpool’s two best attacking movements in the first half. Unlucky to be withdrawn. With Roberto Firmino and Philippe Coutinho on the bench and Sadio Mane sidelined through injury, all eyes were on Origi as the senior man in Liverpool’s attacking line.

But the Belgian was truly frustrating, lacking the energy and dynamism required as Woodburn toiled away.

Philippe Coutinho (on for Woodburn, 46′) – 9 (Man of the Match) – Made everything click. A virtuoso display.

Daniel Sturridge (on for Origi, 68′) – 7 – Turned the tide with his natural quality.

Klopp’s decision to retain his three-man defensive system was certainly questionable, but his bold move to field Alexander-Arnold and Woodburn was admirable.

The German will have been dismayed to see his side perform so disjointedly in the first half, but he deserves credit for sending both Coutinho and Firmino on before it was too late.

Trying to beat smaller sides at their own game is the right approach is a bemusing approach, however, as attack still seems the best form of defence for Liverpool.