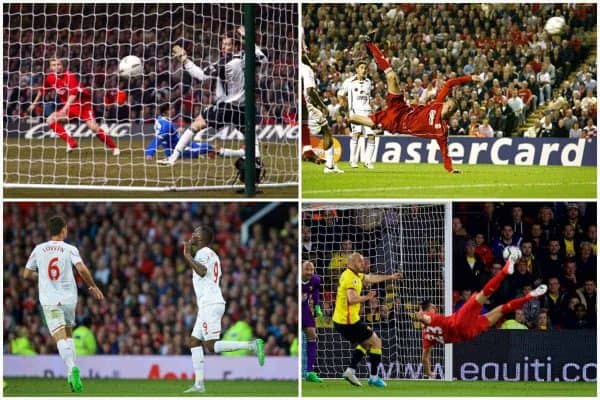 Some Emre Can magic earned Liverpool a priceless win at Watford on Monday, bringing back memories of some special Reds volleys of the past.

In a game devoid of quality and entertainment, Can’s unbelievable strike proved to be the difference at Vicarage Road.

The German has described it as the best goal of his career to date, and it is a strong contender to win Liverpool’s Goal of the Season award.

Once the dust settled and we could recover after a tense finale on Monday, we started thinking about great Reds volleys from throughout history.

Can’s has to be right up there—but what are the others that stand out? Here are 10 that spring to mind.

(NB. Half-volleys do NOT count!)

The first touch may be iffy, depending on your stance, but you can take absolutely nothing away from Terry McDermott’s strike against Tottenham in 1980.

It won the First Division Goal of the Season award that year, and it remains one of the sweetest volleys in Liverpool history. The celebrations weren’t bad, either.

By 1994, John Barnes may have been past his best and slightly on the portly side, but he was still capable of producing moments of genius.

This overhead kick at soon-to-be-champions Blackburn Rovers was Barnes at his very best, as he rolled back the years.

Robbie Fowler scored a vast array of memorable goals for the Reds, but this beauty away to West Ham is one of his forgotten gems.

There have been few more natural finishers in the history of English football, and the emphatic nature of this strike makes you want to watch it over and over again.

As volleys go, this is right up there with the very best.

Didi Hamann didn’t score many, but when he did, they were often spectacular. Portsmouth felt the wrath of his right foot back in 2004, as he connected perfectly with Michael Owen’s tee-up.

John Arne Riise simply didn’t score bad goals, and this corker in the 2005 League Cup final is up there with his finest for Liverpool.

Sadly, Rafa Benitez’s Reds went on to lose to arch-rivals Chelsea, but Riise’s sweetly struck volley got his side off to an absolute flier at the Millennium Stadium.

Ok, so there may be better volleys that we have left out, but in terms of sheer importance, Sami Hyypia’s against Juventus in 2005 has to make the cut.

Peter Crouch may have been extremely tall and gangly, but he was far more nimble than many ever gave him credit for.

His flying effort against Galatasaray is one of Liverpool’s greatest ever Champions League goals—he repeated the feat against Bolton Wanderers, too. That one misses out.

It’s fair to say that Raul Meireles will not go down in history as a Reds great, but he did at least chip in with the odd goal.

His best came at Wolves in 2011—a game remembered more for Fernando Torres scoring his last two goals for the club.

Sebastian Coates’ Liverpool career was one that never kicked on, unfortunately, but this outrageous effort at QPR left you gobsmacked.

The Uruguayan’s strike was every bit as special as Can’s, and the fact that he is a centre-back made it all the more impressive.

Forget that this ended up proving meaningless in the grand scheme of things—this is still an unbelievable effort by Christian Benteke.

Liverpool have not scored many better goals at Man United—can you think of any that are superior?—and it showed what the Belgian was capable of on his day. Unfortunately, we didn’t see that day nearly enough.

We have no doubt missed out some crackers—let us know about any other great volleys, and what your favourite is.