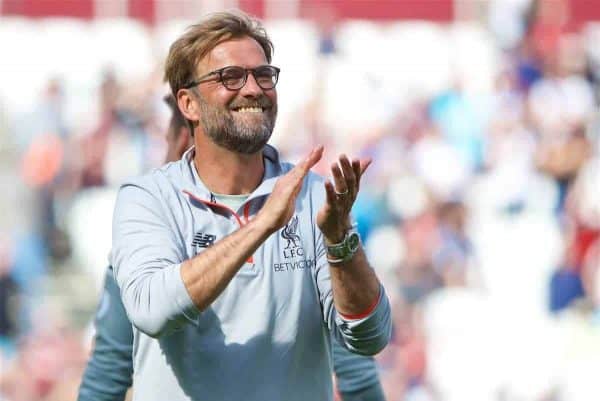 Jurgen Klopp has played down the long-term significance of their final match of the season despite it effectively being a Champions League qualifier.

Liverpool are currently fourth and if they match the result of Arsenal, who are one point behind, they will guarantee a place among Europe’s elite for only the second time in the last eight seasons.

Because of the strides made under Klopp this season some are building up the game as representing the start of a new era for the five-time European champions, but Klopp has no such feelings.

“[There] are a lot of things you can think about this game but at the end it is a football game,” he said.

“First of all you have to respect the opponent, the rules, the 90 minutes. All the rest, in terms of what it means for us, we can talk about after the game.

“I think never in history someone said before a game: ‘This will be the start of a new era’.

“Maybe we can mark it in the middle of next season or later but it is not the game.

“If we have enough points after this match day then we deserve to go to the Champions League, if not then we won’t deserve it.”

Sunday’s match at home to Middlesbrough will be Klopp’s 99th in charge as his first full season at Anfield comes to an end.

The side could record their 50th win and that is all the manager is focused upon.

He will not take their opponents for granted despite the fact their fight against relegation ended earlier this week.

“Everything we can get on Sunday we have to take,” he added.

“So far it’s been a successful season. We have to perform and we have to win.

“We have watched Middlesbrough‘s last few games: it was close and they fought hard to stay in the league.

“They have been unlucky at different moments. It’s a different kind of pressure when you are down there. It is not easy to enjoy it.”

Klopp hopes the fact the Teessiders are free from the fear of relegation, making for a more open game, which would play into his side’s hands as they have struggled against teams who come to Anfield and shut up shop.

“The best thing would be if we are 4-0 up after two minutes but that’s not possible. We have to be ready and football games develop,” he said.

“The start is very important but if the start isn’t good then it does not mean we should stop but we need to restart during the game.

“Everyone can be sure that we will fight for each yard.

“Middlesbrough are a football-playing side. If you give them the opportunity they will play football as they have good players, quick wingers and very experienced striker.

“They want to enjoy their football. They have nil-point-nil pressure if you want, they just want to have a good game and that’s not the worst circumstances for playing good football.

“We are there and we have to be as ugly to play against as possible to play.