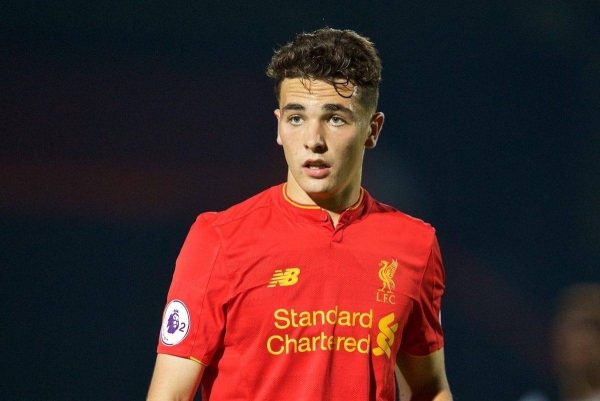 Liverpool U23s midfielder Adam Phillips has been released, after a series of injury problems hampered his progress through the Reds’ academy ranks.

Phillips joined the Reds as a nine-year-old, and had impressed as he worked his way through the age groups to the U23s.

He was even called into Brendan Rodgers’ travelling squad for Liverpool’s pre-season tour of the United States in 2014, along with Conor Coady, Suso, Jordon Ibe, Jack Robinson and Danny Ward.

The midfielder was regularly compared to Steven Gerrard for his phenomenal passing range, with his ability to dictate play hugely valuable at academy level.

But a series of back injuries have restricted his appearances for the U23s, with the likes of Matty Virtue and Paulo Alves moving ahead of him in the midfield pecking order.

And with his contract expiring at the end of the season, Phillips has announced his departure from Liverpool after a decade of service.

This marks a frustrating step in a yearly clear-out of youth talent on Merseyside, with potential proving fleeting for many youngsters at Melwood and Kirkby.

Phillips took to Instagram to confirm his departure on Friday afternoon, expressing his gratitude to his former coaches and team-mates.

“I’d just like to say a massive thank you to everyone associated with Liverpool FC: the staff, players and the fans,” he wrote.

“I’ve been at the club since the age of nine and have had some of the best memories of my life there.

“I’m now looking forward to next season to see where my next chapter will start! Thank you everyone.”

Phillips’ release was met with disappointment by supporters who had followed his fledgling career, while academy coach Rob Jones wished him lucked on Twitter:

Philipps won’t be the only youngster to leave through the Shankly Gates this summer, with Jordan Williams, Brad Garton and Jake Brimmer all set to see out the last weeks of their contracts.