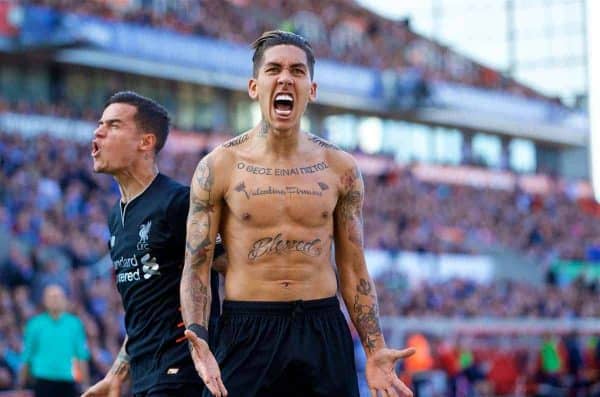 Roberto Firmino could make a return to the Liverpool squad for Sunday’s final-day clash with Middlesbrough after injury, Jurgen Klopp has revealed.

The Brazilian missed last weekend’s 4-0 win away to West Ham with a muscle problem, remaining on Merseyside as Daniel Sturridge took his place.

Sturridge scored the opener at the Olympic Stadium, and looks set to retain his starting role at Anfield on Sunday, with Liverpool seeking a Champions League place.

But speaking at Melwood on Friday, Klopp revealed that Firmino’s recovery was on a “positive” bent, suggesting he could return to the fold at Anfield.

“[It’s] very positive. We could not decide until now, but he feels good,” he told reporters.

“He’s not part of team training, we will make a final test tomorrow and we will see.

“I would rather say yes [he could be available], but not sure.”

If Firmino is passed fit, Klopp could have a host of attacking options to consider, including Sturridge, Adam Lallana, Philippe Coutinho and Divock Origi.

Sadio Mane (knee) is still ruled out, along with captain Jordan Henderson (foot), with Klopp continuing the midfielder’s absence.

“It’s not that difficult an injury, it’s difficult to make the rehabilitation. It needs time,” he said.

“At one point you think ‘it would have been better if he broke his leg’!

“We’ll be without him on Sunday, but no concerns [about long-term problems].

“The season was a little bit short to come back, that’s for sure.”