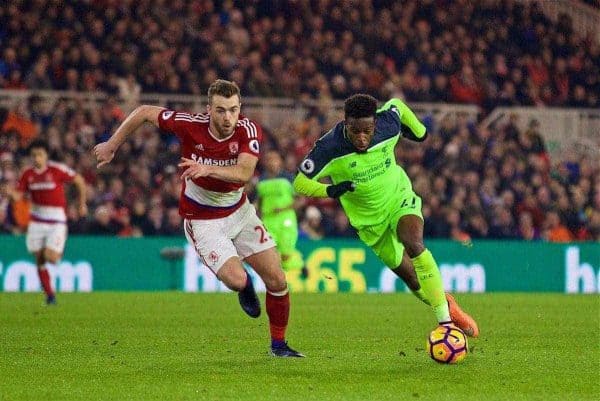 Time for the Reds to secure Champions League football – Liverpool vs. Middlesbrough Preview

Liverpool host Middlesbrough in their final Premier League game of 2016/17 on Sunday, with victory ensuring a top-four finish for the Reds.

So, it’s all come down to this.

After 37 matches and plenty of highs and lows, Liverpool are just one win away from playing Champions League football in 2017/18.

Last Sunday’s 4-0 win at West Ham was a vital victory, especially with Arsenal not lying down, and thankfully, it leaves the Reds’ destiny in their own hands.

On paper, the weekend visit of Middlesbrough shouldn’t be too much of an issue, but we have seen Jurgen Klopp‘s side falter in matches of this ilk time and time again this season.

Add to that the enormous pressure that will be on the players’ shoulders, and we could be in for one of those unbearably tense Anfield afternoons.

Having only reached the Champions League once since 2009/10, achieving this goal would be a big step in the right direction for Klopp and his players.

Supporters have understandably been left frustrated by the way in which Liverpool’s title challenge petered out, but we should not downplay how positive the campaign has been on the whole.

Just how positive will depend hugely on the outcome of Sunday’s game, with anything other than a win a horrible thought for anyone of a Liverpool persuasion.

Be calm, be positive and do the job in ruthless fashion, Reds.

Roberto Firmino missed the victory at West Ham through injury, but he has a good chance of coming into the side for the visit of Boro.

With Daniel Sturridge more than deserving of a start, after an excellent performance at the London Stadium, Divock Origi may be the man to make way.

The Belgian has struggled to find any rhythm all season, and to have Firmino, Sturridge, Philippe Coutinho and Adam Lallana all working in tandem is a mouthwatering thought.

Liverpool are otherwise relatively healthy in the injury department, when you ignore slightly more long-term absentees such as Sadio Mane, Jordan Henderson and Danny Ings.

Boro have no new injury issues to worry about of their own, as they look to end their one-year stay in the Premier League with a positive result.

Klopp discussed Firmino’s fitness, admitting he was still unsure about whether or not the Brazilian would participate on Sunday:

“[It’s] very positive. We could not decide until now, but he feels good,” he said.

“He’s not part of team training, we will make a final test tomorrow and we will see.

“I would rather say yes [he could be available], but not sure.”

Given the importance of it, it is no surprise to see the match screened live on Sky Sports 1. Coverage gets underway at 2pm (BST), with kick-off at 3pm.

Our final live blog of the season will get underway at 2:15pm, with Ben Twelves keeping you entertained throughout the afternoon.

Time to end the season in style.