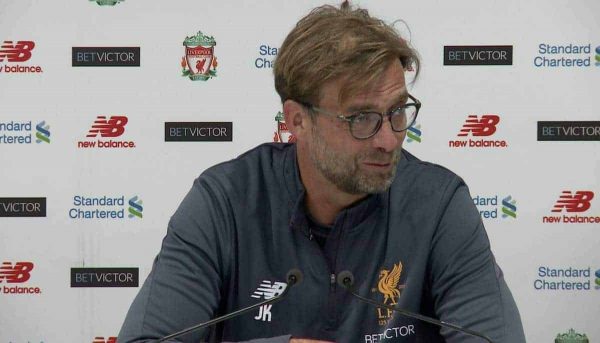 Watch Jurgen Klopp celebrate Liverpool’s 3-0 victory over Middlesbrough, as the Reds sealed a fourth-placed finish and a Champions League berth.

Goals from Georginio Wijnaldum, Philippe Coutinho and Adam Lallana were enough to put Steve Agnew’s relegated Boro to the sword at Anfield.

This saw Liverpool finish above the flailing Arsenal, and securing their place in next season’s Champions League play-offs, which are set to kick off in mid-August.

And it serves as a major accomplishment for Klopp in his first full campaign on Merseyside, with the German revelling in the win after the game.

“We deserve this, 76 points is outstanding. It’s a base we’ve created. We learned a lot in this season.

“Usually at the end of season I am tired, but I could start tomorrow, qualifier and all that—I’m really looking forward to it.”

Klopp also hailed his side’s progress into Europe’s elite, stressing that the Reds “need to be there, consistently.”

“We are not there yet. We will fight for it. We should try everything to change [the recent record],” he explained.

“The target was from the beginning [to qualify for Champions League]. Without injuries we may have had a few points more.”

Liverpool now head to Australia for their post-season friendly against Sydney FC, before departing for international duty and, for Klopp, a summer of preparations.