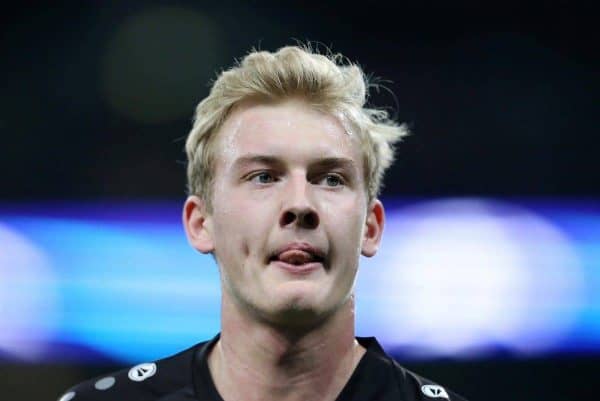 Bayer Leverkusen winger Julian Brandt has explained why he is set to remain with the Bundesliga side, following interest from Liverpool.

Brandt was a priority target for Jurgen Klopp earlier this year, but the 50-year-old was forced to turn his attention to Mohamed Salah instead.

Salah was signed for a club-record £36.9 million last week, becoming Liverpool’s new No. 11, earmarked for a key role alongside Sadio Mane and Roberto Firmino.

While the Egypt winger is far from a step down from Brandt, and enjoyed a much more productive campaign in 2016/17, the Germany international was clearly Klopp’s first choice.

Speaking to kicker this week, however, Brandt revealed that the timing was wrong as he considered a move away from Leverkusen.

“My gut feeling and my head are telling me the time to move has not arrived yet. I have to straighten things out in Leverkusen,” he explained.

“Of course, there are players who say a year without European football before the World Cup is good reason to move.

“But if you move to a bigger club a year before the World Cup, you risk taking time at first to settle which possibly means playing fewer games.”

Brandt is currently with the Germany squad at the Confederations Cup, along with Reds midfielder Emre Can, and is eager to cement his place under Joachim Low for the long term.

He has made nine appearances for his country since debuting in last summer’s 3-1 friendly loss to Slovakia, and started in the 1-0 win over England in March.

His is a sensible stance to take, with there being no guarantee of regular first-team football if he left Leverkusen, while Brandt currently serves as a key player at the BayArena.

Following Brandt’s quotes, the Independent have speculated that Liverpool could return for the 21-year-old next summer.

He currently has two years left on his contract with Leverkusen, who are eager to tie him down to a new deal, but it is unclear whether he will agree an extension.

Leverkusen endured a miserable campaign last time out, finishing 12th in the Bundesliga—41 points behind champions Bayern Munich, who have also been credited with an interest in Brandt.

But they will hope to retain the majority of their top talents, and with Brandt committing to the club, they can target a more positive 2017/18 under Heiko Herrlich.