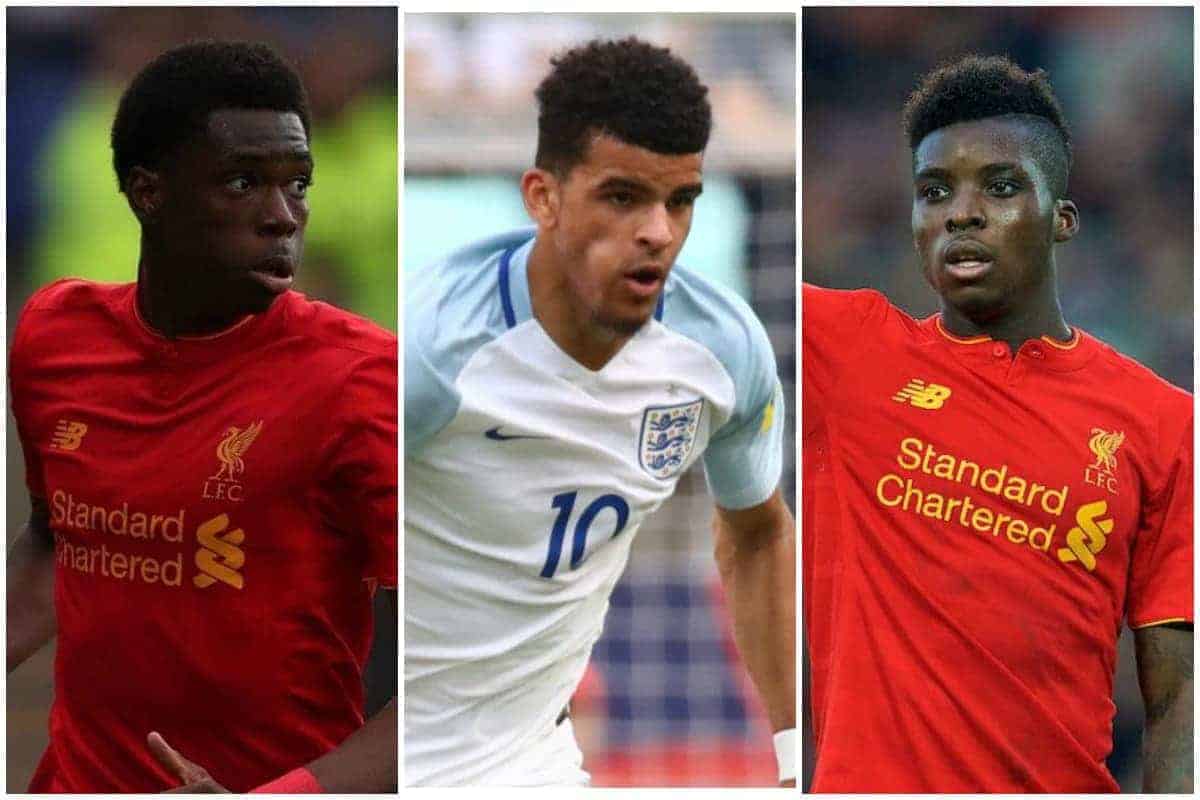 Ovie Ejaria, Sheyi Ojo and Dominic Solanke will all arrive for Liverpool’s pre-season training this summer fuelled by their World Cup glory with England.

The young trio were all part of England U20’s World Cup winning side in South Korea, where they won the competition for the first time in its 40-year history.

But no sooner had the Young Lions lifted the trophy, than the warnings were sounded about their chances of first-team football at their respective clubs next season.

Luckily for Ejaria, Ojo and new signing Solanke, in Jurgen Klopp they have a manager who will give young players chances if they show the required quality and work rate to fit his system.

Ojo and Ejaria both made their first-team debuts under Klopp, and the latter went on to make eight appearances in all competitions last season. Ojo may have featured more regularly were it not for an unfortunate early season injury.

And going into the new season the cream of the academy are likely to be needed even more.

The squad was stretched last season even without having European football to contend with, and several players were regularly playing 90 minutes when they were obviously fatigued.

As well as bringing in new signings, it might also be time for some of the academy players to graduate to the first team and appear on a regular basis.

Even before Liverpool announced Solanke’s signing, the Chelsea youngster was impressing for Paul Simpson’s side in East Asia and was one of the coach’s key players from the start.

Playing in a roaming forward role, the 19-year-old would be the central striker one minute and an attacking midfielder the next, making him the ideal all-round attacker for modern formations.

In his second stint at Chelsea, Jose Mourinho said that he would blame himself if Solanke didn’t become a senior England international during his time there—but it turned out that the player would last longer at the club than his manager.

And you can see why Mourinho thought so highly of him. Flashes of play bring to mind some of the best players in England’s senior setup, including the wandering attacking from midfield of Dele Alli, and the complete forward play of Harry Kane. When it comes to Liverpool comparisons there are echoes of Roberto Firmino, and it’s as backup to the Brazilian that Solanke should get his game time in the coming season.

Firmino played 3,463 minutes in all competitions in 2016/17, by far the most of any forward at the club, and at times this fatigue showed, mentally if not physically.

Solanke should take some of the weight from Firmino’s shoulders, and for that reason the signing is ideal for both club and player. You get the impression that the teenager chose Liverpool on the back of an idea that he would get first-team football under Klopp.

While he may have made more first-team appearances than his team-mates at club level, Ejaria was a bit-part player at the U20 World Cup.

His only start came in a 1-0 group stage victory against the hosts, in which he impressed individually despite it being one of the team’s more sluggish performances at the tournament.

His appearances from the bench were encouraging too, but he wasn’t able to secure a spot in the first XI ahead of Bournemouth’s Lewis Cook, Josh Onomah of Spurs and Everton’s Kieran Dowell.

But rather than this being a slight on the young Liverpool midfielder, it’s more a testament to the strength in depth that the England youth setup have in this area.

Any combination of these players—including Arsenal’s Ainsley Maitland-Niles, who also featured—could have played a part without seeing a drop in quality.

All of these midfielders will be hoping to play Premier League football next season, and in Ejaria’s case he’s likely to improve on his eight appearances last time out.

He’ll almost certainly play a part in the early rounds of the cups, and could also make some appearances in Europe as well as coming off the bench in the league.

Depending on the transfer activity in this area of the pitch, he’ll likely be vying with Marko Grujic for first-team minutes next season, but it would be interesting to see them play together at some point.

While the club’s search for a new winger rumbles on in the rumour mill, Ojo’s performances at the U20 World Cup will have been pleasing for Klopp.

His impact off the bench in the semi-final against Italy changed the game: England were 1-0 down when the Liverpool man entered the fray, and by the time the referee blew the final whistle they were 3-1 to the good.

Playing from the right, Ojo had a hand in the two goals which won England the game and saw them through to the final.

His pace and trickery down the flank had opposition defenders worried, and their hesitancy gave the soon-to-be 20-year-old the space to produce two right-footed crosses which both led to goals.

Despite being left-footed, Ojo did the damage playing the role of the traditional right winger.

This ambidexterity will be an invaluable weapon, and on top of the speed he possesses will make him a nightmare to defend against as his marker won’t know whether he’s going to cut inside or head for the byline.

While Liverpool are scouring the market for a second winger to support or complement Sadio Mane, Ojo should now be nailed on as the third wide man, and his now-proven ability to play on either side should mean he gets plenty of game time.

Klopp will also be hoping that his impact from the bench at international level can be replicated for his club, and he’ll be another tool in the box to help dismantle stubborn opposition defences.

Which of these players has the biggest impact at the club next season remains to be seen.

But it’s likely that all three will be called upon to help the squad through what promises to be a hectic, entertaining and hopefully successful 2017/18 season.