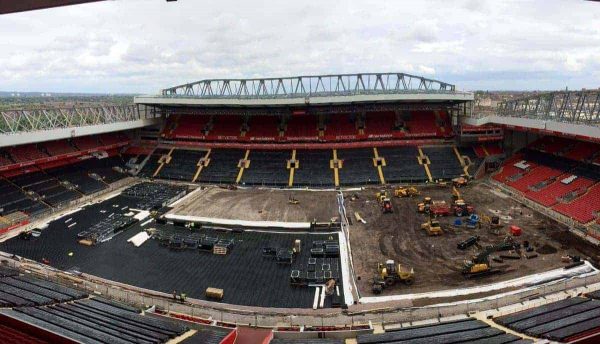 Work continues at Anfield as Liverpool FC replace the pitch ahead of the 2017/18 season.

The Reds’ pitch was last replaced in 2001 and has a lifespan of 10 years, so the new pitch is more than overdue.

A new sprinkler system and undersoil heating are being installed, with a new ‘Desso GrassMaster’ pitch, made up of a combination of natural grass and artificial fibres, providing the new playing surface.

The last two summers has seen the pitch re-seeded, with no option to replace it due to the ongoing Main Stand expansion works.

Anfield’s pitch came in for criticism from former boss Brendan Rodgers, and Jurgen Klopp bemoaned the state it after the 0-0 draw against Southampton in early May.

“Today the pitch was really dry,” explained Klopp. “We gave all the water we had and after 15 minutes it was really dry. It was difficult and with a lot of passes you could say, ‘Why are they playing this?’.

“In a home game you have to have the best circumstances but we couldn’t have this.”

While there’s work on the pitch, literally, there’s also work off the pitch at Anfield, with over 40 different jobs taking place. These range from paintwork internally and externally, to bigger jobs such as a small expansion of the back of the Kop and installation of new disabled access areas.

Liverpool will add around 470 new seats at the back of the Kop, while the number of wheelchair bays will increase from 195 to over 250 positions, plus over 150 extra amenity and easy access seats – these will be located in the Centenary Stand.

There’s also the new external club shop, which is also due to be complete in time for next season.