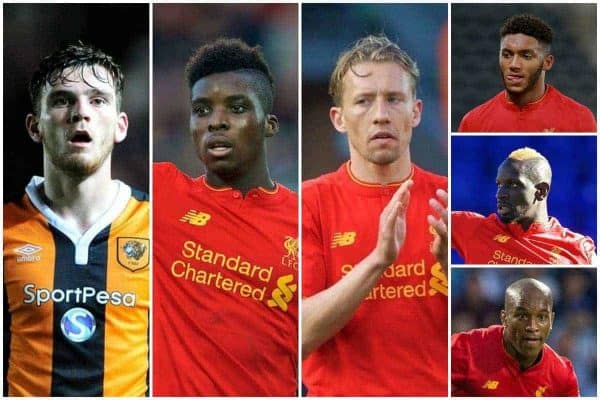 We bring you the latest Liverpool transfer news and rumours from Thursday, as a busy summer window rumbles on for Jurgen Klopp‘s side.

But Thursday may have brought a development in the Liverpool’s pursuit of a new left-back, with the Liverpool Echo providing an update following Sessegnon’s renewal at Craven Cottage.

According to James Pearce, Klopp has maintained an interest in Hull City‘s Scotland international Andrew Robertson.

Pearce claims that the 23-year-old is “one of a number of options being considered,” but any move for a new left-back rests on the future of Alberto Moreno.

Moreno is said to be yet to decide on whether to leave Liverpool this summer, despite the club’s insistence that he can be sold for £15 million.

Robertson is an accomplished Premier League left-back with potential to progress under Klopp, and should be available for a relatively low fee following Hull’s relegation last season.

As he moulds his squad for the upcoming campaign, Klopp is likely to see a host of players leave either on permanent deals or on loan.

One who may depart on a temporary basis is Sheyi Ojo, who according to various reports in the northeast has been the subject of an approach from Newcastle United.

However, that is said to have been turned down, with Klopp set to run the rule over the 20-year-old winger throughout pre-season before deciding whether to sanction a loan deal.

But given Ojo’s peripheral status last season, a move to St. James’ Park may be beneficial.

Another who can be expected to leave is long-serving midfielder Lucas Leiva, who should move on after 10 years with the Reds.

Reports on Tuesday revealed interest from Super Lig side Tranzonspor, and they are believed to be willing to pay £5 million for his services.

However, according to Turkish outlet Haberturk, Trabzonspor’s move for Lucas could hit a roadblock due to the Brazilian’s wage demands.

Lucas is claimed to be seeking around £60,000 a week, but they are only offering £40,000 a week, with this being a major step down from his salary with the Reds.

Joe Gomez is another youngster who could leave the Reds on loan this summer, though as with Ojo, no decision has been made yet on the defender’s future.

However, Brighton manager Chris Hughton has confirmed there is concrete interest from the AMEX Stadium, speaking to local publication the Argus.

“We’ve registered our interest but he’s not our player. It will be up to Liverpool,” he said. “I’d like to think we are very much in the running.”

Gomez’s prospects are likely to depend on whether Klopp is able to sign another centre-back this summer, with Van Dijk his priority.

Have Palace Moved on From Sakho?

One centre-back who has no future on Merseyside is Mamadou Sakho, with Liverpool hoping to secure a £30 million deal for the Frenchman before the end of the transfer window.

Sakho was regularly touted with a permanent move to Crystal Palace, where he spent the second half of last season on loan, but this has seemingly changed since the appointment of Frank de Boer.

According to the Telegraph, De Boer has set his sights on Ajax’s Joel Veltman, while the Mirror claimed that the Eagles are interested in a loan deal for Chelsea‘s Kurt Zouma.

Both would be significantly less expensive options than Sakho, and given Palace also need to strengthen elsewhere, this could spell the end of their pursuit of Liverpool’s No. 3.

Adam Bogdan is unlikely to be a name many Liverpool supporters have thought of this summer, but the Hungarian still remains on the books on Merseyside.

After initially impressing on loan with Wigan Athletic last season, Bogdan saw his campaign derailed by an ACL injury suffered in November.

He returned to training at Melwood in April, however, and now according to the Mail, could be on his way to Nottingham Forest this summer, in another likely loan deal.

Finally, onto a deal that has been on the cards for a long time, and Andre Wisdom is finally set to complete his £4.5 million move to Derby County this weekend.

Terms were agreed between the two clubs in mid-June, but Wisdom has been on holiday throughout this month, and while he has agreed personal terms with the Rams, is yet to put pen to paper.

But according to the Derby Telegraph, Wisdom’s return to Pride Park should be finalised in the coming days.

However, there is still the possibility of the 24-year-old failing his medical, though manager Gary Rowett is hoping an outstanding issue is “a technicality.”