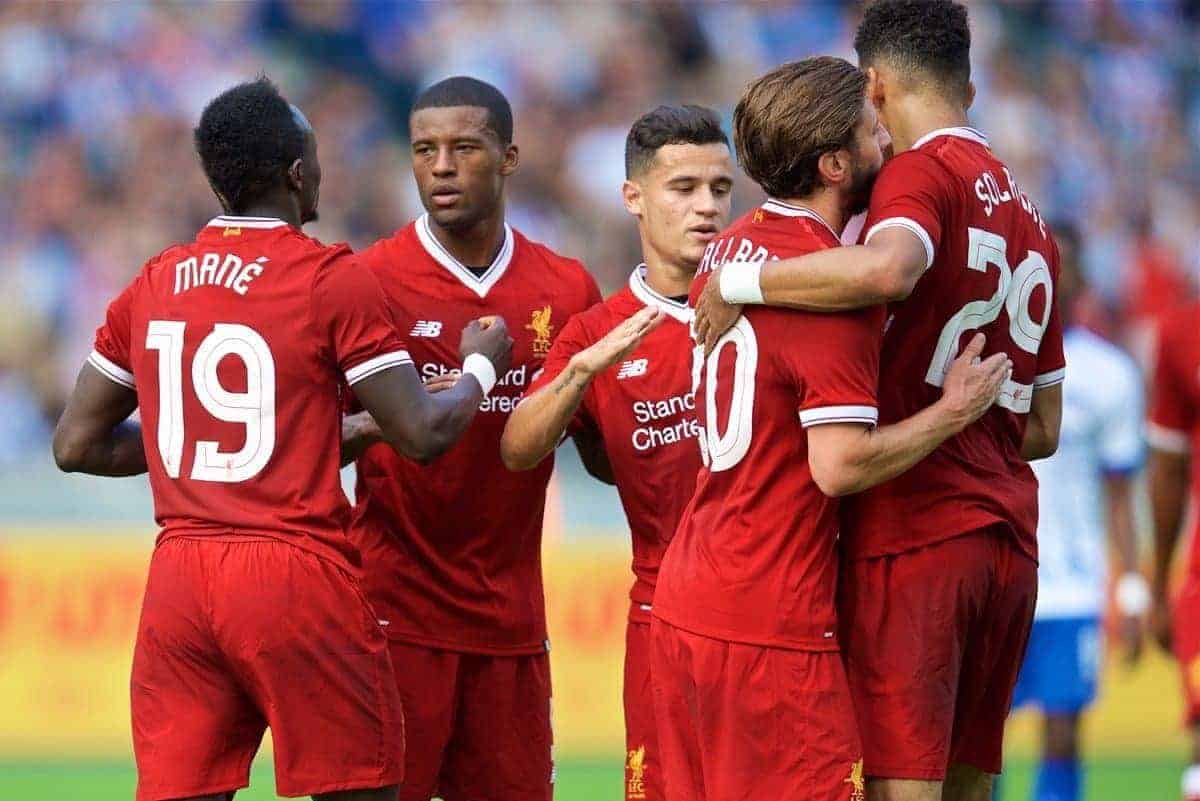 Liverpool were in excellent form once again as Jurgen Klopp‘s side sealed a 3-0 pre-season victory away to Bundesliga side Hertha Berlin on Saturday.

The Reds arrived in Germany having already defeated Tranmere Rovers, Crystal Palace and Leicester City, and drawn with Wigan Athletic, in a productive start to the summer.

With Klopp overseeing intense training in Rottach-Egern, the 400-mile trip to Berlin allowed his side to put their ideas into practice again.

And with goals from Dominic Solanke, Georginio Wijnaldum and Mohamed Salah at the Olympiastadion, they ensured an effective dismantling of Hertha.

Amid speculation over his future, Philippe Coutinho was named captain, with James Milner injured and Jordan Henderson left on the substitutes’ bench. Emre Can took Henderson’s place at the base of Liverpool’s midfield and shone, especially with one bursting, 50-yard run from the middle of the park.

Solanke’s industry and attacking zest up front was particularly impressive in the first half, with the 19-year-old scoring his second goal of pre-season with a deft header. His interplay with the returning Sadio Mane was invaluable, with the winger not looking to have been affected by his lengthy layoff following knee surgery in April.

It was Solanke and Mane who combined to provide Wijnaldum with his first away goal for the Reds, tucking the ball home with a crafty finish from outside the area.

Salah’s clincher will hopefully become a common occurrence for the Reds in 2017/18, with the Egyptian racing onto Coutinho’s lofted pass to dink it over Rune Jarstein.

Andrew Robertson was introduced alongside Salah at half-time, with the left-back impressing on his first outing for the Reds. Young midfielder Ovie Ejaria also made an appearance as a second-half substitute, having missed the first four games of pre-season as he worked his way back to fitness.

After a resounding victory for his side—their third in a row—Klopp was certainly pleased with their output in his homeland.

Next up is a trip to the Allianz Arena on August 1, where Liverpool will take on Bundesliga champions Bayern Munich in their first of two games in the Audi Cup.

On Saturday’s performance, the Reds look to be in great shape as they prepare to take on the German giants.