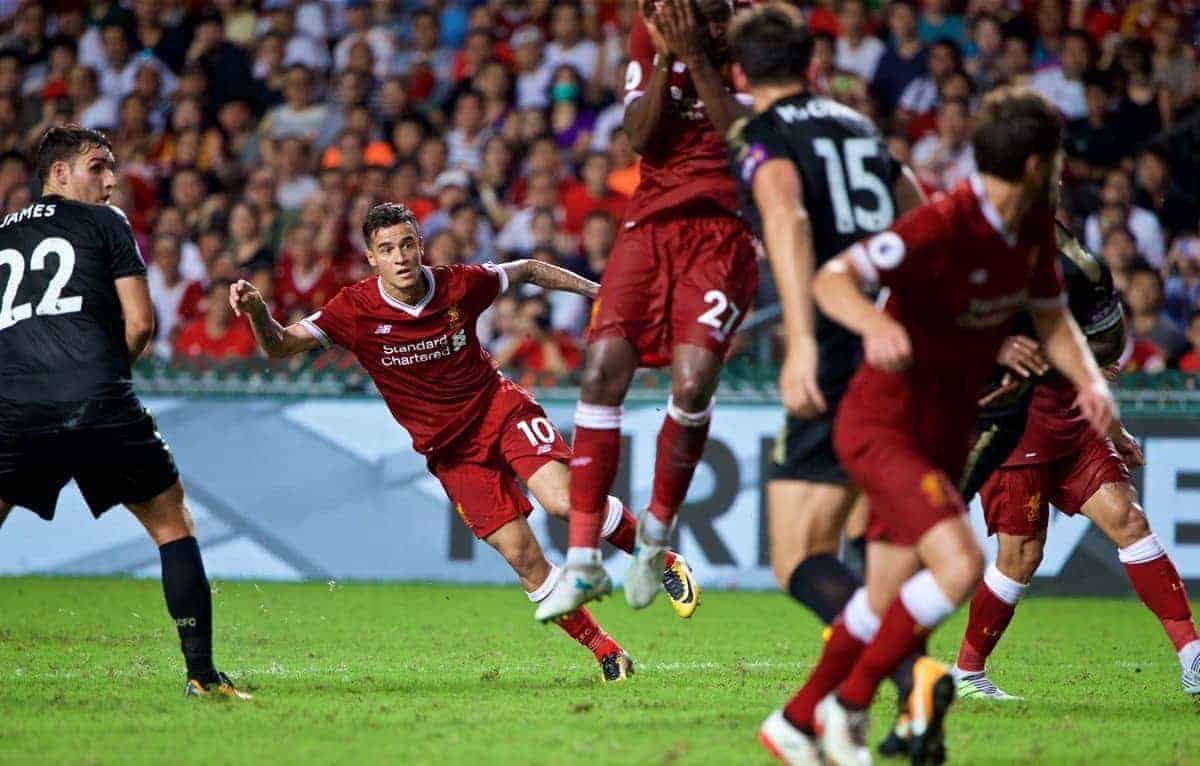 Liverpool won the Asia Trophy thanks to a wondergoal from Philippe Coutinho, whose performance was one of the talking points from the final.

Liverpool have been the aggressors for much of the transfer window, looking to clubs below them in the pecking order and attempting to pick off their best players.

Recently, however, they’ve had to deal with the other side of things as Barcelona tabled a £72 million bid for Coutinho.

Now the shoe is on the other foot Liverpool have taken the Leipzig-esque stance that the player is not for sale at any price.

But unlike the Naby Keita saga, there is no indication that Liverpool’s star player wants to leave the club, and therefore the Reds have no reason to sell him.

If they did, this performance will have added a few numbers onto any potential fee they could demand for the Brazilian.

On top of this, the movement and quality of the players around him might have persuaded Coutinho that he can enjoy a successful season at his current club and make sure he stays in the Brazil team ahead of the 2018 World Cup.

A dinked pass over the top landed on Mohamed Salah‘s head for the first goal, and a typical strike cutting in from the left wing gave Liverpool the win.

It was a Man of the Match performance from the man of the moment. When defenders reach their thirties they’re generally at the peak of their mental powers.

Having spent the best part of 10 years dealing with top-level attackers, if they’re any good they should have learned what to expect and where best to position themselves.

But the danger is that their physical decline can negate any nous as attackers simply use pace and agility to evade them.

Ragnar Klavan turns 32 this year, but on this display he’s showing no sign of decline.

He dealt with the trickery of Riyad Mahrez better than any of his team-mates, and put in an outstanding goal-saving tackle on Jamie Vardy.

While one half of football in the Asia Trophy isn’t enough to judge a player fully, it was enough to see that Klavan can still be an important part of the Liverpool squad in the coming season, even if they do sign a new starter. It’s become widely referred to as the No. 6 role, but the true defensive, holding midfielder is a No 5. Just ask Javier Mascherano—the last player to successfully play the role for Liverpool.

Today the squad number matched the position, as Georginio Wijnaldum operated in the space usually occupied by either Jordan Henderson or Emre Can.

As Can is yet to return due to his Confederations Cup involvement with Germany, and one-time fourth choice in the position, Kevin Stewart, has been sold to Hull City, it was left to the versatile Dutchman to fill the position in the first half.

Despite not being overly familiar with the role during his time at Liverpool, Wijnaldum looked reasonably assured in this part of the pitch, showing good energy and impressive battling qualities deep in the midfield.

Henderson stepped in for the second period to restore some familiarity, but Wijnaldum remained on the pitch, moving further forward and getting a good hour of game time. Roberto Firmino had the crowd on their feet several times with pieces of “how did he do that” Brazilian skill in the first half.

Playing from the left gives him more space to play, but his best moves often come when the opposition are tight to him.

Salah and Divock Origi joined in with their fair share of flicks, back-heels, and fancy footwork, while Adam Lallana was typically neat, tidy and inventive with his play.

The two goals lit up the stadium, and the competition, and were worthy of this tournament which is a cross between exhibition game, pre-season friendly and marketing exercise.

Liverpool’s stock will have risen in the region thanks to their entertaining performances, and they were also able to take some things from it on the football side of things.

It doesn’t count as a trophy though.

To Germany For a Different Test Altogether A warmup game against Hertha Berlin precedes the Audi Cup in Munich, where the club will play two games in two days: against Bayern Munich, and then one of Napoli or Atletico Madrid.

The coaching staff will have to manage the players’ workload, and it’s likely that some of the outfield players will get their first full 90 minutes as they continue to prepare for the opening game of the season, and their all-important Champions League play-off.