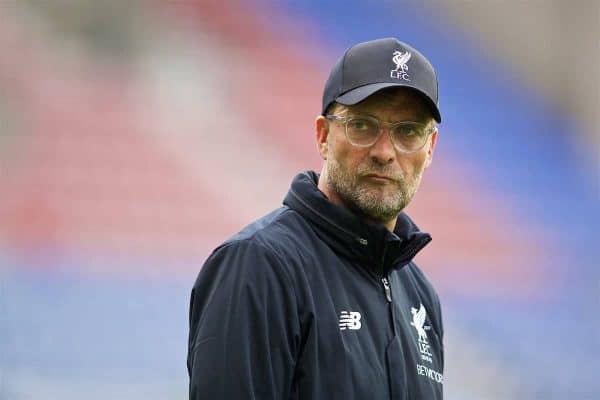 Liverpool manager Jurgen Klopp insists he will not talk about transfers as he cannot influence his targets or positively affect the outcome.

The Reds have so far signed Mohamed Salah from Roma and Dominic Solanke after his contract expired at Chelsea, but are interested in RB Leipzig midfielder Naby Keita and Hull left-back Andrew Robertson.

Speculation also continues to link them to Southampton centre-back Virgil van Dijk, despite the club publicly withdrawing their interest in the Holland international after Saints reported them to the Premier League for an alleged tapping-up of the player.

Liverpool fly out to Hong Kong for the Premier League Asia Trophy on Sunday and no further additions are expected before then.

“If whatever would say here would change anything in a positive way, I would,” said Klopp after the 1-1 friendly draw with Wigan in which Salah scored in his first appearance.

“It is not important what I say. No. I can’t say anything.”

There may, however, be a departure after Lazio made a £5 million bid for midfielder Lucas Leiva, the club’s current longest-serving player after a decade on Merseyside.

The Brazilian was left out of the squad at the DW Stadium as he considers his future and Klopp is unsure whether the 30-year-old will be on the flight to the Far East.

Lucas, who made 19 starts in all competitions last season and 346 appearances for the club, has recently entered the final year of his contract and knows he is unlikely to get regular game time again in the new campaign.

In the last 18 months Klopp has asked Lucas to stay on to provide some much-needed experience, despite interest from a number of clubs in Turkey and Italy.

But he he will not stand in the Brazilian’s way if he decides he wants to pursue regular first-team football elsewhere.

“I am not 100 percent sure, but I think for Lucas, [who’s had an] outstanding, fantastic time at Liverpool, we should talk about facts and not rumours. Maybe something, maybe not,” said the Reds boss.

Asked whether the midfielder would be travelling with the squad at the weekend, he added: “We will see.”

“The Premier League gave us a nice challenge that we can only involve 25 players, so if we take three goalkeepers we can only take 22 [outfield players],” he explained.

“Tonight we will make the decision. Maybe the squad will need to be different. Clyney has a little issue. Alberto Moreno is on the way back.

“We have to take enough players that we can play two games in difficult circumstances.”