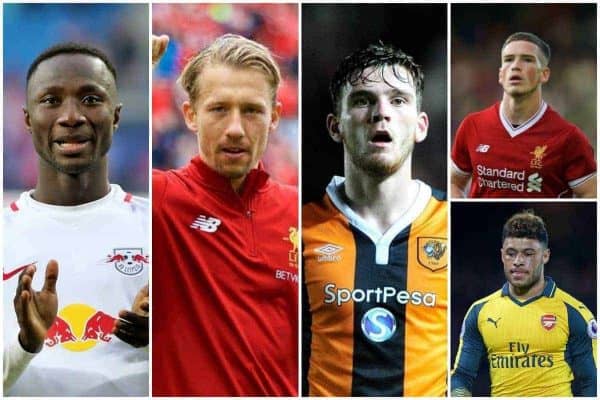 As the Liverpool squad prepare to head out to Hong Kong to continue pre-season, we round up the latest transfer news and rumours from Merseyside.

The Egyptian, along with Dominic Solanke, is expected to be followed by further new faces in the coming weeks, while others make their way through the Anfield exit.

Here’s the latest from the rumour mill, including an update on Klopp’s next high-profile addition.

Earlier in the week, it was revealed that Liverpool had seen their opening £57 million bid for RB Leipzig midfielder Naby Keita rejected.

This is Anfield’s Chris Williams, who has sourced information from the Bundesliga side, has provided an update on a potential deal for the 22-year-old.

Williams reports that while Leipzig manager Ralph Hasenhuttl and sporting director Ralf Rangnick are adamant the player won’t be sold, their stance is undermined by the club’s hierarchy.

Leipzig are said to be of the opinion that a €75 million (£65.7 million) offer would be ‘ridiculous’ to turn down, though this is more than Liverpool are expected to bid next week.

It seems that Keita is edging closer to a move to Merseyside, but negotiations are still likely to stretch long into the summer.

Lucas Due For Lazio Medical

Keita’s arrival would bolster Klopp’s midfield ranks significantly, but before an agreement is made with Leipzig, the German is set to see one of his current options depart.

Lazio submitted a £5 million bid for Lucas Leiva on Friday, leading the Brazilian to be left out of Klopp’s squad for the trip to Wigan.

Now, according to reports in Italy, Lucas is now booked in for a medical with the Rome club on Monday morning, with this set to get underway at 7am (BST).

Lucas has spent the last 10 seasons with the Reds, but finds himself low down the pecking order heading into 2017/18.

It is likely that he will make the move to Stadio Olimpico, with an announced potentially coming as soon as Monday afternoon.

Ahead of kickoff on Friday night, the Guardian reported that Liverpool were closing in on an £8 million deal for the Scotland international.

Robertson has one year left on his contract with the Tigers, and it is unlikely he will opt to remain at the KC Stadium following their relegation to the Championship in May.

He isn’t expected to arrive in time to travel to Hong Kong, but a deal could be in place by the time the Reds head to Germany to take on Hertha Berlin.

The 23-year-old could even come in as an upgrade on Milner, who was in Klopp’s second-half XI at the DW, with Jon Flanagan named in the Reds’ starting lineup.

While Robertson is set to go one way along the M62 this summer, Liverpool winger Ryan Kent could make the opposite journey to Humberside.

According to the Liverpool Echo, the Tigers are interested in bringing Kent to the KC on a season-long loan.

Along with Connor Randall, Lazar Markovic and Sheyi Ojo, Kent was left out of Klopp’s squad against Wigan, with all four likely to leave either temporarily or permanently this summer.

Klopp was eager to take a closer look at Kent this pre-season, but has been given an early taste of the upcoming campaign’s restrictions as he is only able to name a 25-man squad for the Premier League Asia Trophy.

Kent is unlikely to be part of that group, and a move to Hull would certainly be beneficial.

Wenger Insists Oxlade-Chamberlan is Not For Sale

Both Robertson and Keita look set to join the Reds ahead of 2017/18, but another target could evade the German’s grasp.

Alex Oxlade-Chamberlain is currently with the Arsenal squad for their pre-season tour of Australia, and started in Saturday’s 3-1 win over the Western Sydney Wanderers.

Speaking after that victory at the ANZ Stadium, Gunners manager Arsene Wenger underlined his intention to keep the 23-year-old in north London.

“Yes. 100 percent, I expect him to stay,” he told reporters when asked about Oxlade-Chamberlain’s future. “No matter the speculation, he will stay.”

This is an emphatic statement from the Frenchman, and it may be that Klopp is forced to wait until next summer, with Oxlade-Chamberlain’s contract set to expire in 2018.