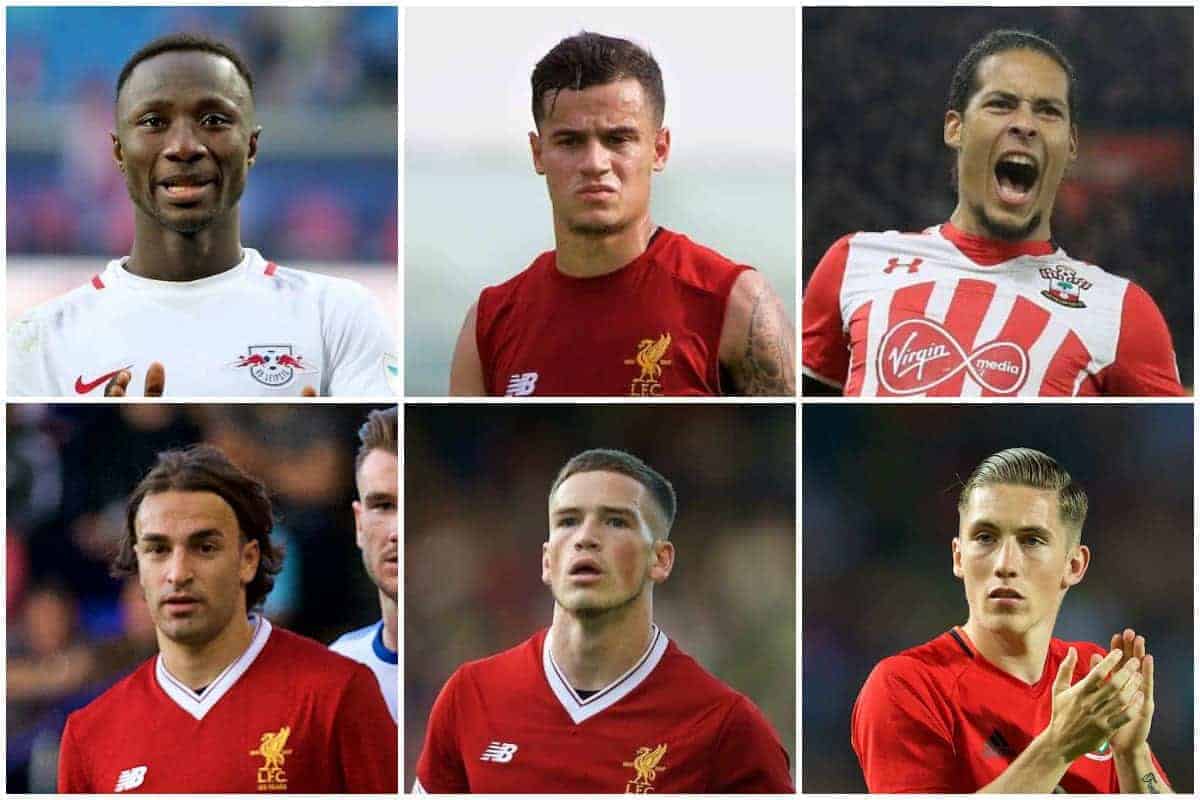 We round up the latest Liverpool transfer news and rumours on Wednesday, including updates on Naby Keita, Philippe Coutinho and Virgil van Dijk.

The Reds have flown to Germany for the next stage of their pre-season preparations, with Jurgen Klopp naming a 30-man squad for the tour.

They will remain out of the spotlight whenever possible in Bavaria, but with sporting director Michael Edwards spearheading negotiations, transfer activity is likely to continue.

Here’s the latest from the rumour mill as the window wears on.

Leipzig CEO Speaks Out on Keita

The likelihood of Liverpool signing Naby Keita this summer is growing slimmer by the day, with RB Leipzig taking a no-nonsense stance in negotiations.

Reports on Tuesday claimed that the Reds had not made another offer since Leipzig rejected their second bid of £66 million.

And speaking to German publication BILD on Wednesday, the Bundesliga side’s CEO, Olivier Mintzlaff, said the club “is looking forward to the next season together” with Keita.

Mintzlaff also refuted suggestions Keita was not committed following an altercation with fellow midfielder Diego Demme in training, saying the Guinean was “world class” in Tuesday’s 1-0 friendly win over Konyaspor.

However, it’s also claimed that the player is often on his own in Leipzig’s training camp and seems unmotivated during the training sessions. Liverpool are similarly steadfast in their efforts to retain Philippe Coutinho this summer, having turned down a £72 million offer from Barcelona.

The Spanish side are expected to return with an improved bid for the playmaker, and reports in Catalan media have claimed Coutinho has already agreed personal terms at the Nou Camp.

According to Catalan radio station RAC1, “now it is only necessary to negotiate the transfer [with Liverpool],” with Coutinho eager to make the move.

His pursuit is said to be endorsed by Barcelona’s current forward trio of Neymar, Lionel Messi and Luis Suarez.

That all these Coutinho reports are coming from very Barcelona-centric media, it seems to be a very clear intention to unsettle the player and spin some positive PR for the club.

Unlike Keita, the prospect Southampton centre-back Virgil van Dijk joining Liverpool this summer seems more likely at this stage in the transfer window.

Having been left out of Mauricio Pellegrino’s squad for a pre-season training camp in France, Van Dijk is training alone in Hampshire.

And according to Sky Sports, a source close to Van Dijk “expects him to be a Liverpool player by the end of the window.”

Liverpool are not said to have made another approach for the Netherlands international yet, however. Despite impressing in pre-season outings against Tranmere Rovers and Wigan Athletic, Pedro Chirivella was left out of Klopp’s squad for the trip to Germany.

The Spanish midfielder spent the second half of last season on loan with Go Ahead Eagles in the Eredivisie, and completed his second temporary move to the Netherlands on Wednesday evening.

Chirivella has joined Willem II, formerly home of Sami Hyypia, on a season-long deal, as he seeks further experience of first-team football.

The 20-year-old still has three years left on his contract with Liverpool, but it is questionable whether he has a long-term future under Klopp.

Speaking last week, Klopp said it was “no secret” that Lazar Markovic could leave Liverpool this summer.

The Serbian has spent the last two seasons away on loan, with Fenerbahce, Sporting CP and, most recently, Hull City, but the Reds are hoping to negotiate his permanent departure.

According to Goal’s Melissa Reddy, Serie A side Fiorentina are the most likely, with Markovic having flown out to Italy to discuss a potential switch.

Liverpool are looking for £16 million for the 23-year-old, despite previous claims their valuation had dropped to half that.

Leicester City and Watford are also credited with an interest in Markovic, who joined the Reds from Benfica for £20 million in 2014.

Another winger likely to leave Liverpool this summer is Ryan Kent, with the academy prospect expected to depart on a season-long loan.

Both Hull and Leeds United have already had offers accepted for the 20-year-old, though he has travelled to Germany as part of Klopp’s touring squad.

Now, the Express claim that a further eight clubs are interested in signing Kent before the start of 2017/18. Klopp’s squad for their upcoming clashes in Germany has provided clarity on the positions of some of his fringe players.

Along with Markovic, Adam Bogdan, Mamadou Sakho, Connor Randall, Sheyi Ojo and Harry Wilson have all been left out.

Ojo is mulling over a loan move to one of Fulham, Middlesbrough and Derby, while Bogdan is said to be on the verge of joining Nottingham Forest.

Meanwhile, Sakho is still on Crystal Palace‘s radar, though the Eagles have so far baulked at Liverpool’s £30 million asking price.

It remains to be seen where Randall and Wilson end up by September 1, but it is unlikely to be Merseyside. Gabigol struggled in his first season with Inter Milan in 2016/17, making just 10 appearances for the Serie A side, scoring once and totalling just 183 minutes on the pitch.