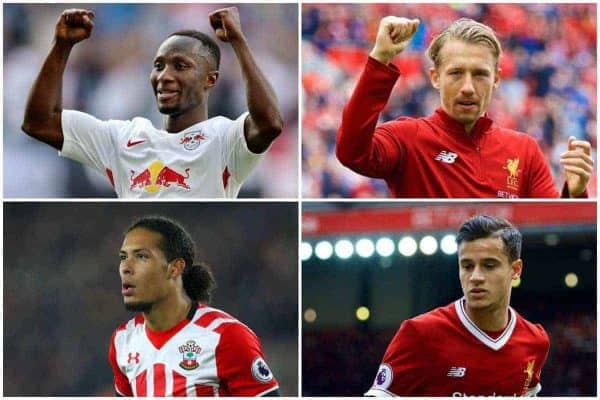 In the wake of Liverpool’s opening pre-season victory, we round up the latest from the rumour mill, including updates on Jurgen Klopp‘s two key targets.

The Reds produced a comprehensive display away to Tranmere Rovers on Wednesday night, with James Milner, Marko Grujic, Pedro Chirivella and Ben Woodburn scoring in a 4-0 victory.

Klopp’s side returning to action this summer provides a welcome distraction to constant transfer speculation, but there remains a keen focus on those the German is looking to add to his squad.

Here we cover the latest Liverpool transfer news and rumours for Thursday.

Leipzig Tell Liverpool Keita is Not For Sale

RB Leipzig midfielder Naby Keita is a source of both great hope and great frustration for supporters this summer, having emerged as one of Klopp’s priority targets.

The Reds are pursuing a deal for the 22-year-old Guinean, and are said to be prepared to bid a club-record £70 million to secure his services.

However, according to widespread reports on Thursday morning, Leipzig contacted Liverpool on Wednesday to reiterated that Keita is not for sale at any price.

Klopp’s prospects of signing the No. 8 now seemingly rest on the player himself pushing for a move, with Keita set to return for pre-season training on Thursday.

German publication BILD claimed on Thursday night that the Reds had made a £57 million bid for the midfielder. Could the balance be shifting?

Liverpool find themselves in the same position regarding Southampton centre-back Virgil van Dijk, even having to publicly end their interest in the Dutchman in June.

However, Klopp is believed to have retained hope of signing Van Dijk for another lofty fee, with Southampton valuing the defender at around £60 million.

Speaking to the Liverpool Echo after Wednesday’s win at Prenton Park, Klopp was asked for an update on the 26-year-old, but found his hands tied.

“Am I allowed to talk about this? I am not! Pretty much everything I could say would be a mistake,” he said, after consulting Liverpool’s press officer.

“You or your colleagues wrote everything about this a few weeks ago. I was in Iceland by the way when somebody told me this was in the newspaper.

“Nothing happened since then, all good so far, so I can’t say anything about this.”

Wednesday saw Liverpool midfielder Lucas Leiva touted with a move to Serie A side Lazio, with the Rome club believed to be interested in an initial loan deal.

The Brazilian produced a solid display alongside Joel Matip at centre-back in Birkenhead, but after 10 years with the Reds, it seems likely he will depart this summer.

And addressing the possibility of his side signing Lucas as a replacement for the AC Milan-bound Lucas Biglia, Lazio defender Stefan Radu said he would welcome his arrival.

“If Leiva comes we will be happy,” he said. “There will be plenty of competition, we need it.”

Lucas has been linked with a return to Gremio, however, and spent the summer in Brazil, which could suggest a preference to rejoin his former club.

Reports on Monday stressed that Liverpool are not willing to part ways with Philippe Coutinho this summer, despite interest from both Barcelona and Paris Saint-Germain.

PSG were claimed to have been preparing a move for the 25-year-old, identifying Coutinho as an alternative to priority target Kylian Mbappe.

However, Barcelona’s pursuit of the Brazilian has gone cold, and according to reports in Spain this may have been due to the influence of Lionel Messi.

Diario Gol claim that while Neymar was advocating a move for his compatriot, Messi was not enamoured by the prospect of playing with Liverpool’s No. 10.

The Argentina international certainly holds considerable sway in Catalonia, so it is feasible that Messi played a hand in Barcelona’s withdrawal.