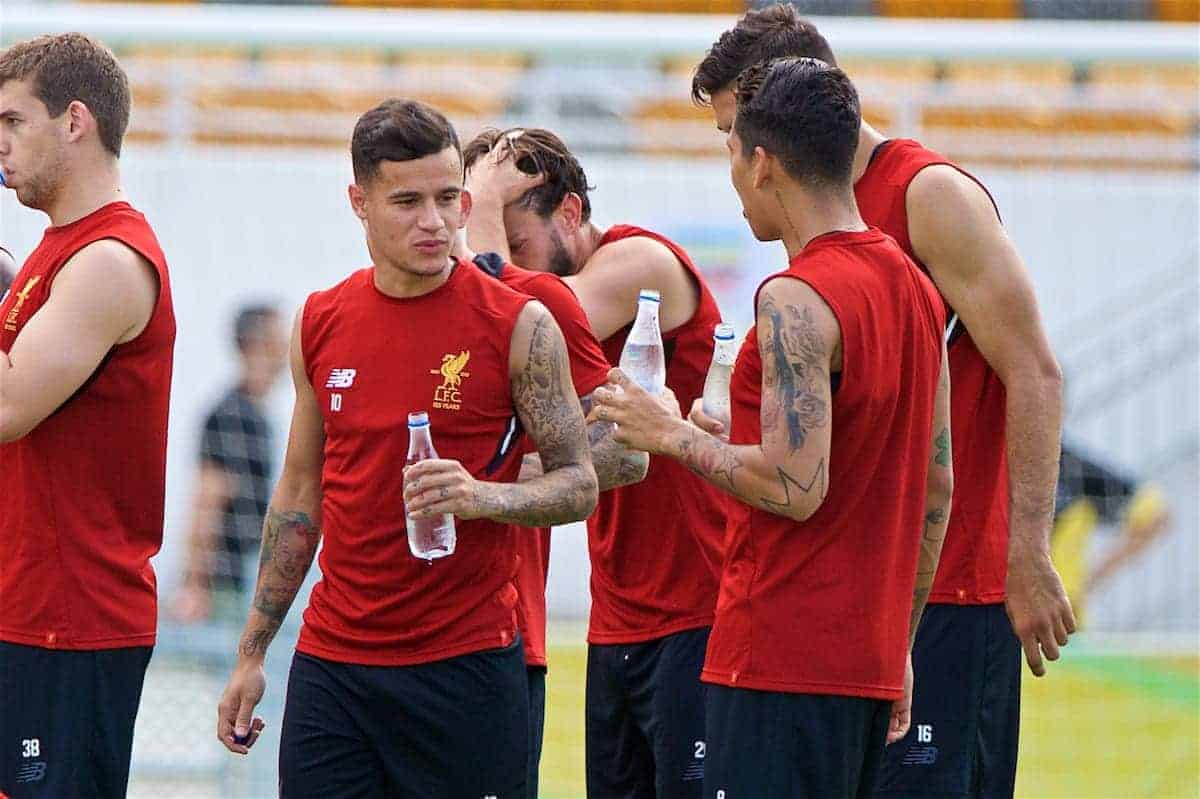 Jurgen Klopp led his Liverpool side through an open training session at the Mong Kok Stadium in Hong Kong on Friday, as pre-season continues.

The Reds will take on Leicester City in the ‘final’ of the Premier League Asia Trophy on Saturday afternoon, to round off a productive tour of the Far East.

Though the first days of their trip were hampered by torrential rain, that has now made way for searing heat, providing Liverpool with a physical test as they undergo pre-season training. A 24-man squad, including the likes of Georginio Wijnaldum, Adam Lallana and Jon Flanagan, took part in an intense 90-minute session. Liverpool’s record signing Mohamed Salah, was also present, with the Egyptian hoping to build on his promising performances so far against the Foxes at the Hong Kong Stadium. The Mong Kok Stadium is home to both Kitchee SC and Eastern Sports Club, and is just under five miles away from Saturday’s venue, and two-and-a-half miles from where the Reds are staying. Young goalkeeper Kamil Grabara was not part of Klopp’s squad against Palace on Wednesday, having been included on the tour as an extra man, providing the Pole with invaluable experience. All eyes were on Philippe Coutinho, after Liverpool rejected a £72 million bid from Barcelona for the 25-year-old on Thursday, with Klopp telling reporters: “We are not a selling club.” Daniel Sturridge was in positive spirits throughout, with the striker in top condition as he prepares for his fifth full season with the Reds. It was clearly a gruelling session, however, with Liverpool spending a large portion of the afternoon practising set-piece situations, both defending and attacking. Adam Lallana spoke to reporters along with Klopp, and said “our fans are worldwide and we feel under pressure to deliver week in, week out and bring a trophy back to Anfield.” Liverpool were cheered on by an passionate crowd of supporters throughout, with the backing Klopp’s side have received in Hong Kong a testament to the club’s reach around the world. After Saturday’s clash, the Reds will return to Melwood, before heading to Germany for three clashes, against Hertha Berlin (July 29), Bayern Munich (August 1) and one of Atletico Madrid or Napoli (August 2).

Finally, they will take on Athletic Bilbao in Dublin (August 5), before starting the season away to Watford (August 12) in the Premier League.