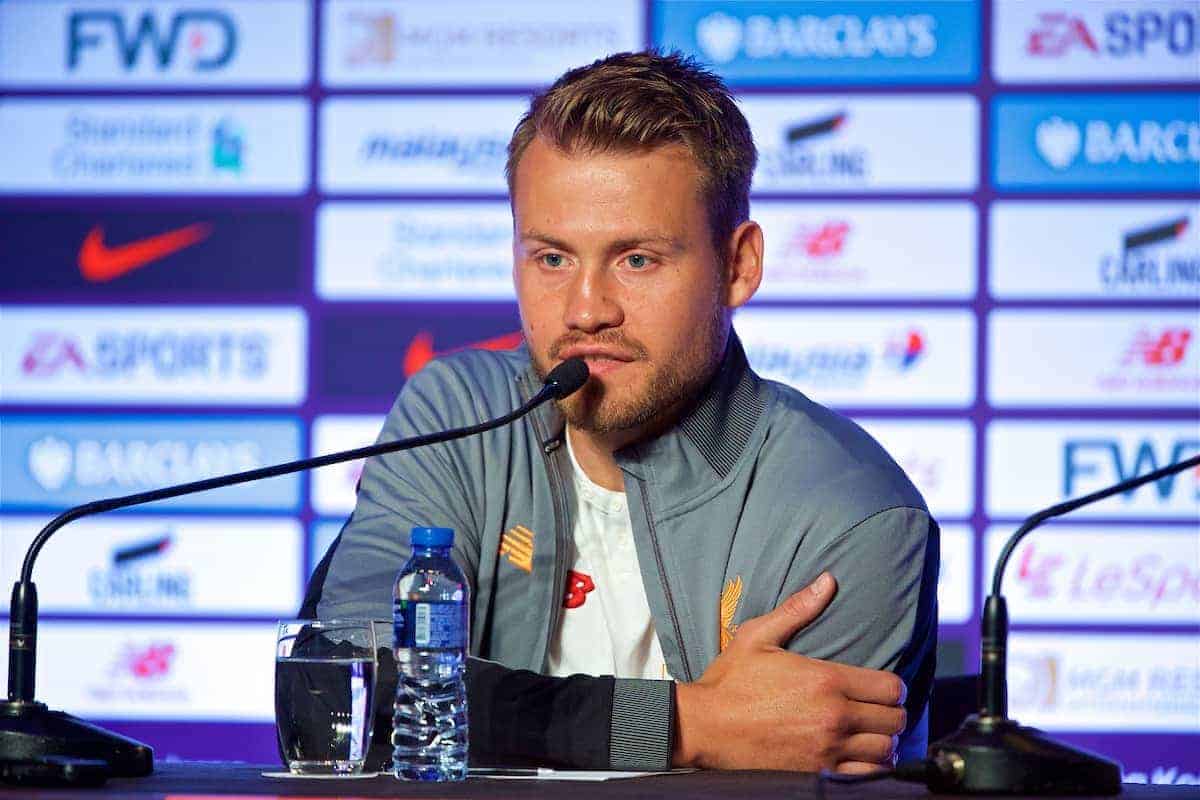 With the inclement weather somewhat clearing up, the teams, media, and the fans were feeling somewhat chipper.

Mignolet, who rebounded from coming off the bench to take back the starting keeper’s spot last season, exuded the cheerfulness of the new day.

“The first few days of the pre-season are really good for us so far,” said the Belgian. “We’re training hard and we’re enjoying it.

“We’ve played two games (against Tranmere and Wigan) but at this moment we are not back to our fitness level as last year.

“In the off-season, we worked hard. Everybody came back in really good shape. When training starts, it’s all about getting to know everybody again. Physically, it’s the first steps.”

With Klopp amusedly looking on upon hearing that Mignolet opened his coffee shop, “Twenty Two Coffee” in his hometown of Sint-Truiden – a reference to his kit number with the Reds – late last calendar year, Mignolet recounted his off-season that he proclaimed to be “enjoyable”.

“After the games with Belgium (two World Cup Qualification matches), we had a couple of weeks off. I spent some time with the family and the wife to go on holiday.

“But in the meantime, we texted pictures about us in the off-season (to the manager) to show that we kept fit. Even in the off-season, you have to stay fit. I had a good break. I enjoyed it. But I am looking forward to the new season.”

When asked about “reporting to the boss” via text pictures, Mignolet said that he wasn’t alone in doing so.

“All the boys let him know what we’re doing in the off-season. Like I say, you have to keep fit. You have to look after your body even if you’re on holiday.” Now in Hong Kong for a pair of matches – the first against nemesis Crystal Palace and the second either against Leicester City or West Brom – the team isn’t in the Far East for any shopping (of which the island is known for).

“Going into the new season, you play a similar style of football you have to face. We hope to get better conditions and the weather is different. But it’s nice to show the fans out here what the PL is all about so they can see with their own eyes.”

Of expectations for the upcoming season, the goalkeeper measured his words, “Expectations — to win every game. Go into every game with the idea of trying to get all three points. I think that’s the message.

“It’s the pre-season, so it’s also about better fitness. It’s about getting ready. At the same time (here in Hong Kong), we want to engage fans.”

Regarding the three-way battle for the starting goalkeeper slot along with Loris Karius and the returning Danny Ward, Mignolet insisted the competition is good not only for each other but also for the squad.

“We push each other for the new season. The more competition there is for the players, the better. We can only get better individually.

“I know myself I have to push myself as far as I can go. You look in the mirror every day and ask what can you do better and what can you improve? We push each other not only in training but also in the games.”

Mingolet also had good words for Ward who was outstanding with Huddersfield (who wre promoted to the Premier League at the end of the last season).

“He’s gained experience of course. He had a good season with Huddersfield. Not only the experience but what it will do for his confidence. Playing in the Championship will help him. It will be important for our position (for the goalkeepers). He’s a year older and he’s come back a different man.

“Everyone in the squad is hungry for the new season. The main message is nobody can do anything individually we have to do it as a squad. We have a good bunch of lads who want to do well in England and in Europe.”

But before Liverpool turns its firm attention to the Premier League, there is the matter of the Asia Cup Trophy.

“Two years ago we came to Asia and kinda had a bit of rain. It’s normal here and we’re used to it. We have to deal with the situation as best as we can.

“We make sure we are physically ready to train today. So, we look forward to it and deal with it. We will deal with it as best as we can.”