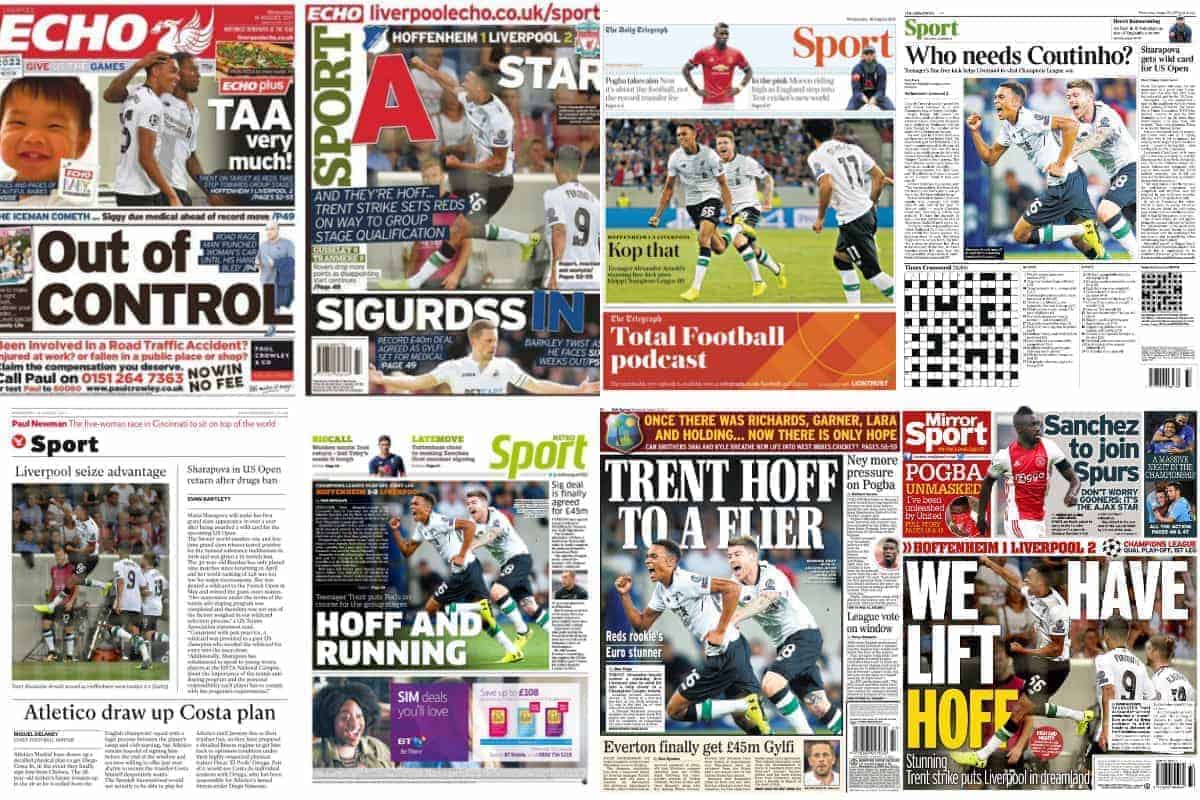 The media felt Liverpool produced an improved performance and Trent Alexander-Arnold shone as they sealed a vital 2-1 win at Hoffenheim.

A place in the Champions League group stage is in sight for Jurgen Klopp’s side after batting to a crucial play-off first-leg victory in Germany.

A stunning free-kick from Trent Alexander-Arnold on his European debut and an own goal from Havard Nordtveit ensured the Reds will take a priceless advantage into the Anfield second leg.

It was far from plain sailing on a nervy night for Klopp’s side who rode their luck at times, but claiming a positive result was the most important thing and Liverpool certainly achieved that.

Here’s how the media assessed events at the Rhein-Neckar-Arena.

Most of the watching media were positive about another bright attacking performance and improved defensive showing from Klopp’s side, but others were unconvinced by the overall display.

The Liverpool Echo’s Ian Doyle praised the Reds for delivering such a crucial victory after a testing start to the season:

“This was an excellent result for Liverpool, one achieved with uncertainty off the pitch surrounding the club’s transfer business and criticism on it over the defensive issues once more apparent in the Premier League opener at Watford.”

The performance was “classic Liverpool away from home,” according to ESPN’s Glenn Price:

“In many ways, this was classic Liverpool away from home in the Champions League.

“Indeed, Liverpool’s win over Julian Nagelsmann’s promising Hoffenheim was not pretty, but it has put them with a more-than realistic chance of reaching the group stages of the Champions League for only the third time in nine seasons”.

The Mail’s Martin Samuel praised the control of Liverpool’s display and felt the Reds deserved victory:

“Liverpool were the better team, even if Simon Mignolet was required to save a penalty after 10 minutes, and they looked in control after an early bout of nervousness.”

“Maybe attack is the best form of defence? The way Liverpool break when they are a goal in front is quite astonishing, forcing the opposition to commit less to attack in case they are punished further.”

Luke Brown, of the Independent, even saw an improvement in the Reds’ defending:

“Klopp stuck with the same back four against Hoffenheim—Alexander-Arnold and Alberto Moreno in the full-back positions with Lovren and Joel Matip in the middle—and it’s true that they did fare better than they did in the 3-3 draw on Saturday.

“This defence is a work in progress.” However, the Echo’s James Pearce felt it was a performance boasting more of the same:

“Just as at Watford on Saturday, the Reds packed a punch going forward as they created a stack of opportunities, but defensively they looked just as vulnerable.

“This victory will do little to appease fans concerned about a lack of squad depth both at the back and in midfield. Reinforcements are urgently required.”

“In truth a two-goal cushion would have flattered Klopp’s team.”

Phil Dawkes of the BBC thought “the positives outweighed the negatives” overall, and praised the Reds’ proficiency in front of goal despite Philippe Coutinho’s absence:

“The positives, though, outweigh the negatives for Klopp and his side.

}While clearly a stronger side with Philippe Coutinho in it, the Reds have shown over two matches that they can score goals without the Brazilian, who sat this game out with a back injury and remains on Barcelona’s wanted list.”

A selection of journalists turned focus to the make-or-break second leg, with most feeling confident that Liverpool will see the job through to qualify for the group stage.

Samuel believes the Reds will complete the job on Merseyside, with the capability to punish Hoffenheim on the break:

“They still need to win by two goals and there was little on show here to suggest they can do that without further conceding. Liverpool should be fine, even if that failure to keep a clean sheet will be another frustration for Jurgen Klopp.”

This Is Anfield’s James Nalton feels Liverpool should take the game to Hoffenheim at Anfield:

“This scoreline should set it up perfectly for Liverpool at Anfield. Hoffenheim have no choice but to try to chase the game.

“In the second leg at Anfield, the best form of defence may be attack.”

“But it would also be fair to say that Liverpool were confronted with enough of their own weaknesses over the course of one first leg that they cannot take for granted their place among the Champions League group stages at Anfield next Wednesday.”

Plenty of post-match reports centred on an unforgettable night for Alexander-Arnold, who earned heaps of praise for his decisive goal and impressive all-round performance.

Samuel praised the youngster’s courage to take the free-kick, and his ability for dispatching it so perfectly:

“So kudos to Alexander-Arnold for the cool way he executed his duties as free-kick taker in the absence of Philippe Coutinho. It is testament to his ability that his more experienced team-mates give him the responsibility, and to deliver on this stage was hugely impressive.”

Price commended the 18-year-old’s fearlessness on the big stage, and feels he is making the right-back spot his own:

“But there is a feeling that the No. 66 would have been first choice, regardless of Clyne’s fitness.

“In front of an intimidating crowd and in a game with serious permutations, Alexander-Arnold showed no signs of being overawed.”

Pearce was among those to draw comparisons between Alexander-Arnold and boyhood hero Steven Gerrard for the way the local lad stepped up when it mattered most:

“When Liverpool were in need of inspiration, Alexander-Arnold stepped up and delivered. It was reminiscent of his mentor Steven Gerrard.”

“That he was not only Liverpool’s best defender but the best outfield player—Mignolet made a couple of important saves—against a team playing their first Champions League fixture will have manager Jurgen Klopp asking questions of those far more experienced around him.”

Meanwhile, the Mirror’s David Maddock believes the youngster could push for a place in England’s World Cup squad this summer:

“Alexander-Arnold has a huge future at Anfield, his athleticism, his desire, his pace mark him out as a future England full-back; and don’t rule him out of yet going to next summer’s World Cup.” On a night when some big individual performances were produced, reporters offered their thoughts on who shone and struggled in Germany.

The Mirror’s Joe Mewis assessed Sadio Mane as being back to his best:

“The Senegalese looks back to his irresistible best following last season’s injury worries, as he used his pace to skin any Hoffenheim defender that got in his way.

“Far and away Liverpool’s biggest threat on the night, Mane evaded defenders, drew free-kicks and was involved in just about every promising move the Reds made.”

“Klopp confirmed before the season the Belgian was his first choice between the sticks. This was a fine way for Mignolet to repay that faith.”

“It has been remarked at how much work the Brazilian has dedicated to making himself more powerful and he certainly showed that on Tuesday night, occupying three home centre halves with strong, old-fashioned hold-up play.”

The Mirror’s Alex Richards was critical of Alberto Moreno’s performance and feels Andy Robertson should be brought in from now on:

“But if that is indeed the case, then the 180 minutes of competitive action makes the case that Moreno simply isn’t good enough and his replacing can’t come soon enough.

“Andrew Robertson has arrived from Hull, and surely his chance will come at the weekend when Crystal Palace visit Anfield.”

This Is Anfield’s Henry Jackson was unimpressed with Dejan Lovren’s display:

“Sometimes you feel Lovren gets unnecessary criticism, then he performs this poorly. That was the case at the Rhein-Neckar-Arena, with some hapless defensively threatening to send Liverpool home empty-handed.

“He conceded the penalty that Mignolet saved, which was minutes after an awful sliding challenge out wide. He was generally the erratic figure we see so often.”

“Either way, Jordan Henderson isn’t firing on all cylinders for one reason or another, and it’s a worrying trend for a captain going into what promises to be a hectic season.

“Apart from a couple of good sprayed balls out wide, his passes were heavy and poorly chosen. His defensive work seems tireless but futile, and he was hardly ever there to cover for the attacking full-backs.”