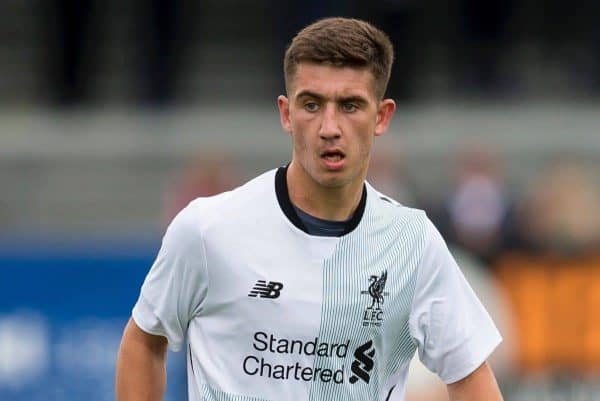 Cameron Brannagan suffers another injury setback ahead of transfer deadline

Liverpool U23s midfielder Cameron Brannagan has been ruled out for a month with a broken hand, potentially affecting his chances of a move.

The 21-year-old could have expected to leave the Reds this summer, with Hull City, Derby County and Stoke City all credited with an interest in a permanent deal.

But with Brannagan training with the Reds’ U23s squad ahead of the new campaign, the midfielder has suffered another disappointing injury setback.

The Liverpool Echo report that Brannagan has suffered a broken hand which is set to keep him out of action for around a month.

Though the youngster does not face surgery after his knuckles were stepped on at Kirkby, he has been advised to avoid contact while he recovers.

With the transfer window set to close on August 31, this could well hamper his chances of leaving Liverpool this summer.

The Reds are already said to be unwilling to send Brannagan out on loan due to his precarious contract situation, with just one year left on his deal.

And it remains to be seen whether an injury with affect potential interest from the Championship and the lower regions of the Premier League.

Brannagan was surprisingly included in Jurgen Klopp‘s 32-man squad for the upcoming Champions League play-off against Hoffenheim, as one of nine locally trained players.

This is likely a contingency plan for the German, who seemingly has no plans to use Brannagan in a first-team capacity, despite his initial breakthrough in 2015/16.

The youngster made eight appearances under Klopp in his first season on Merseyside, and there was speculation over an improved contract towards the end of the campaign.

But his last senior outing came on the final day of that season, and he was overlooked for the entirety of 2016/17, spending the second half on loan with Fleetwood Town.