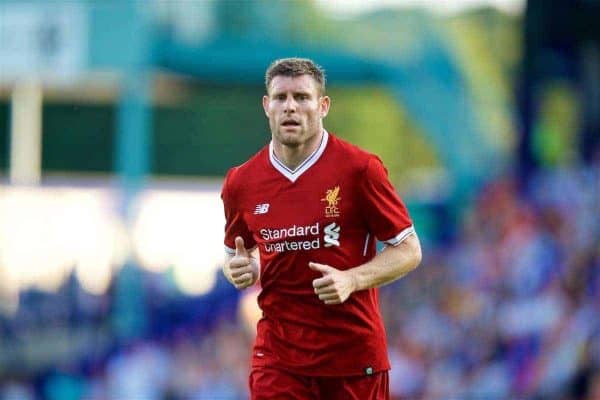 Jurgen Klopp has named a strong starting lineup for Liverpool’s final friendly clash of pre-season, taking on Liga side Athletic Bilbao in Dublin.

The Reds travelled to the Republic of Ireland on Saturday morning looking to round off a successful summer of preparations ahead of 2017/18.

With just one week left before they open their campaign away to Watford in the Premier League, Liverpool’s face-off with Jose Angel Ziganda’s Bilbao serves as a useful barometer of their progress.

Naming a 23-man squad for the flight to Dublin, however, Klopp was forced to leave behind a host of key names, including Nathaniel Clyne, Jordan Henderson, Adam Lallana, Philippe Coutinho and Daniel Sturridge.

Nevertheless, the German has still named an impressive side at the Aviva Stadium, looking to lead his side to their sixth win out of eight pre-season games.

Simon Mignolet starts in goal, behind a back four of Trent Alexander-Arnold, Joel Matip, Dejan Lovren and Alberto Moreno.

Emre Can looks set to line up in the deep-lying role in midfield, flanked by James Milner and Marko Grujic.

On the substitutes’ bench, Klopp can call upon the likes of Georginio Wijnaldum, Sadio Mane and Dominic Solanke, as he looks to build his side’s fitness, fluency and form before their trip to Vicarage Road on August 12.