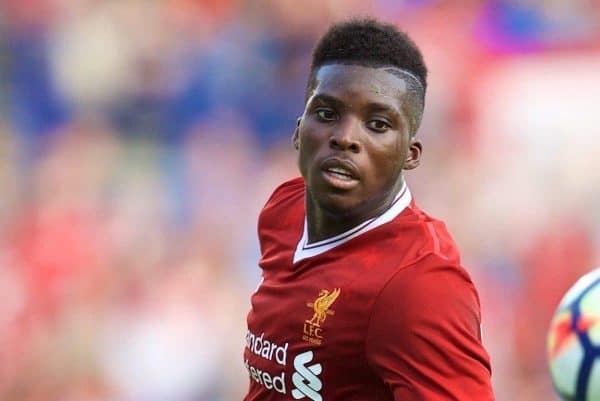 Liverpool winger Sheyi Ojo has joined Championship side Fulham on a season-long loan, becoming the fifth to leave Anfield on a temporary move.

The 20-year-old has linked up with the Cottagers after turning down offers from Derby County, Middlesbrough and Aston Villa.

Ojo will spend the 2017/18 campaign at Craven Cottage, operating under Slavisa Jokanovic, who has showcased an impressive faith in youth since joining from Maccabi Tel Aviv in 2015.

Jokanovic, who will be looking to lead Fulham to promotion this season, has been central to the development of 17-year-old left-back Ryan Sessegnon.

Liverpool can hope Ojo experiences a similar benefit to his countryman, as he pushes for a more prominent role on Merseyside in the future.

He featured just once in pre-season, in the 4-0 win away to Tranmere Rovers, but had a hand in two of the Reds’ goals at Prenton Park.

Last season he struggled with a series of injury issues, but already has first-team experience from loan spells with Wigan Athletic, Wolves and under Jurgen Klopp in the second half of 2015/16.

This should be his first season as a player at regular at senior level, however, with Fulham lacking other wide options this season.

“I’ve had the pleasure of spending time with Sheyi and his family, and I’ve seen firsthand what a tremendous work ethic Sheyi has both on and off the pitch.

“He possesses fantastic physical talents and also carries himself with poise and class, and I know that he’s going to be a great addition to our squad.”

Ojo can operate on either flank, with his versatility no doubt providing him further opportunities under Jokanovic, who played for two years at Chelsea during a lengthy playing career.

Brooks Lennon is also spending the MLS season with Real Salt Lake, having joined in February, while further Reds are likely to head out for the season in the coming weeks.

All the best, Sheyi!