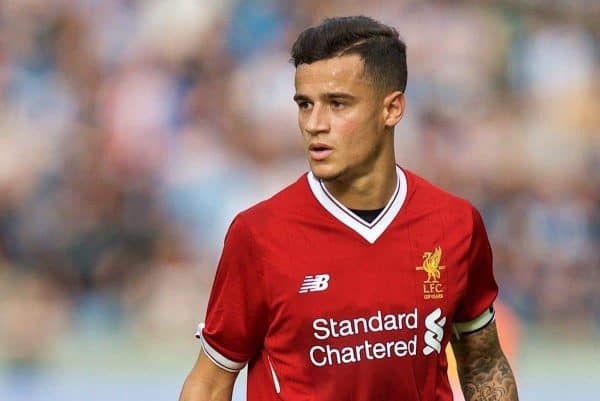 With Barcelona rumoured to be pursuing Liverpool midfielder Philippe Coutinho this summer, contrasting reports over a move continue to emerge.

The Spanish giants saw their £72 million offer for the Brazilian rejected out of hand towards the end of July, with Jurgen Klopp saying “we are not a selling club.”

However, speculation over Coutinho’s future remains, fuelled by his absence from Klopp’s travelling squad for Saturday’s 3-1 victory over Athletic Bilbao to round off pre-season.

The 25-year-old is said to have suffered a minor back injury, but that has not dampened suggestions he is close to a move to the Nou Camp.

But sources around Europe continue to contrast each other over developments in Barcelona’s rumoured pursuit.

According to Spanish publication Sport, Liverpool have agreed a deal worth €100 million (£90.3 million) with the Liga side, with a delegation travelling to Merseyside next week.

They claim that, fuelled by Neymar’s €222 million move to Paris Saint-Germain, Barcelona now have the financial potential to sway the Reds from their hardline stance.

French newspaper L’Equipe, however, report that the Catalan outfit are instead close to a deal to sign Ousmane Dembele from Borussia Dortmund.

The France international is said to be earmarked as Neymar’s successor, with the speculative fee again standing at €100 million.

While Neymar’s departure has, in theory, provided Barcelona with the funds to sign both Coutinho and Dembele, it would likely be one or the other at this stage.

And having already turned down a significant offer of £72 million, it is questionable whether the Reds would accept an improved deal.

This has been underlined by Sky Sports reporter Kaveh Solhekol, who took to Twitter to reiterate Liverpool’s approach to Coutinho’s future:

Barcelona-based papers convinced Philippe Coutinho is going to sign for Barcelona next week. No change in Liverpool position – not for sale

There remains the concern that Coutinho will push for a move to Barcelona before the end of the transfer window, but the No. 10 has previously stressed his commitment to Liverpool.

With just over three weeks to go before the end of the transfer window, speculation is unlikely to subside, but it should certainly all be taken with a pinch of salt.