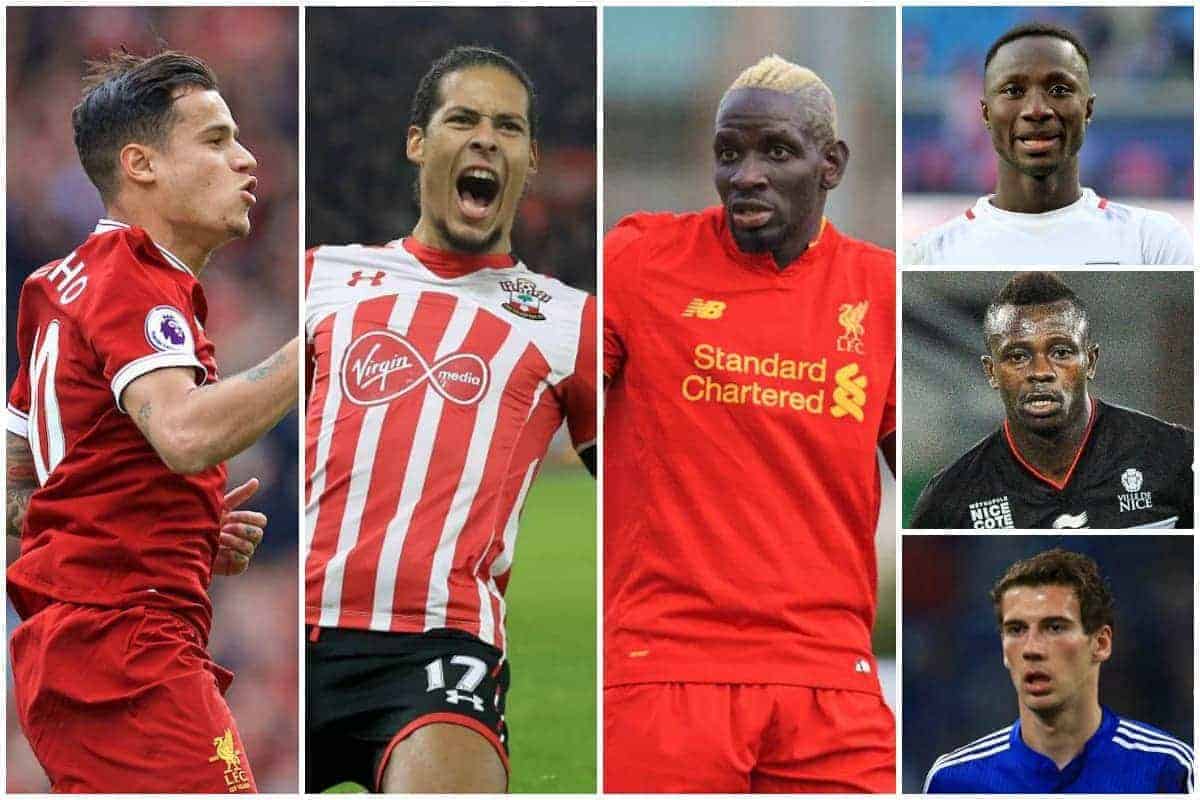 We round up the latest Liverpool transfer news and rumours, as Philippe Coutinho comes to terms with a failed attempt at joining Barcelona.

The end of the summer transfer window is edging nearer, and the Reds have still brought in just three new faces: Andrew Robertson, Mohamed Salah and Dominic Solanke.

While 16 have departed in total, including four on permanent deals and five on loan, there is likely to be considerable activity in the market over the next nine days.

Here’s the latest from the rumour mill as the August 31 deadline closes in.

After Liverpool rejected Barcelona’s bids of £72 million, £90.4 million and £114.2 million this summer, the Spanish side have seemingly withdrawn their interest.

That leaves Philippe Coutinho in a difficult situation, having handed in a transfer request earlier in August, with a suspicious back injury ruling him out of action.

And according to the Liverpool Echo, the Brazilian is now backtracking on his claims that he would never play for the Reds again—with his agent, Kia Joorabchian, said to be at fault.

Coutinho is suggested to have been “manipulated” into a forcing through a move by Barcelona.

The Independent claim that the 25-year-old will now hold “clear-the-air talks” with the club as he bids to return to Jurgen Klopp‘s consideration.

Liverpool have not made any further additions to Klopp’s squad since Robertson’s £8 million switch from Hull City on July 21.

Over a month on from the Scotland international arriving on Merseyside, and there are clear issues that still need addressing—chiefly, at centre-back.

But the Reds are no closer to a breakthrough in their pursuit of Southampton‘s Virgil van Dijk, with the club’s hierarchy waiting for the green light to open negotiations.

The hope was that a bid from elsewhere, with Chelsea and Arsenal both interested, would allow Liverpool to make an advance, but the Telegraph report that the Blues are taking the same stance.

Van Dijk is now training with the Saints’ U18s squad, and according to Sky Sports’ Bryan Swanson, the St Mary’s outfit are still adamant he won’t be sold. It has been previously reported that if Liverpool fail to sign Van Dijk, Klopp is content with Joel Matip, Dejan Lovren, Ragnar Klavan and Joe Gomez as his centre-back options.

As this would be worryingly negligent, German outlet DW Sports‘ claim that the 50-year-old is “interested” in an £18.3 million deal to sign Schalke veteran Benedikt Howedes is a relief.

Howedes has fallen out of favour at his current club following the arrival of manager Domenico Tedesco in June, and is said to be considering a move to England.

The 29-year-old played alongside Matip during their time together at Schalke, and would be a fine addition to complement the Cameroonian.

This is Anfield’s Henry Jackson believes signing Howedes would be a “no brainer” for Liverpool, with Anfield the “perfect destination” for the versatile defender.

“He could come straight in and thrive under the stewardship of his compatriot Klopp,” Jackson writes, “and add the sort of quality, experience, and depth that the Reds continue to lack.”

Barcelona’s reputation as a respected European powerhouse has taken a series of hits this summer, with their efforts at bolstering Ernesto Valverde’s squad roundly criticised.

The failure to land Coutinho has left the Liga giants desperate to seal further signings as they move on following Neymar’s £198 million move to Paris Saint-Germain.

And according to the Mirror, Barcelona scouted two players regularly linked with Liverpool, Naby Keita and Leon Goretzka, in Schalke’s 2-0 over RB Leipzig on Saturday.

Furthermore, the Guardian, among claims that they still harbour hopes of signing Coutinho, report that the Catalan outfit are “closing in” on OGC Nice’s Jean Michael Seri.

This shift in interest from Barcelona does seem convenient, to say the least…

Along with a lack of signings over the past month, Liverpool have also not been able to shift any more of their unwanted players since Kevin Stewart left for Hull City on July 21.

One of those expected to leave is Mamadou Sakho, but with Crystal Palace manager Frank de Boer labelling the Reds’ £30 million valuation “too expensive,” this now seems less likely.

Instead of Sakho, Palace are reported to have set their sights on more obtainable targets.

The Mirror suggest that the Eagles are interested in AEK Athens’ Ognjen Vranjes, who would be available for up to £4.5 million, while the Mail claim they have bid £15 million for Tottenham‘s Kevin Wimmer.

West Brom are also said to be interested in Sakho, but they could instead keep hold of Jonny Evans, with the Independent reporting that Man City may opt to sign Middlesbrough captain Ben Gibson instead. Beyond their three signings, Van Dijk and Keita, the Reds have been linked with few genuine targets so far this summer.

According to Spanish publication AS, however, Liverpool did make a move for Atletico Madrid forward Angel Correa, only to be rebuffed by Diego Simeone’s side.

Correa was rumoured to have been offered a five-year, £48,000-a-week contract by the Reds towards the beginning of July, but no move materialised.

Now, AS claim that Liverpool made a £25.7 million bid for the 22-year-old, who came off the substitutes’ bench to score in Saturday’s dramatic 2-2 draw away to Girona in La Liga.

Atletico were only willing to allow Correa to leave on loan, and he now looks set for a more regular role in Madrid this season.

Finally, while Coutinho looks set to stay at Anfield for the time being, Liverpool could well be planning for life without the Little Magician.

According to a dubious report in Diario Gol, Klopp has set his sights on Real Madrid midfielder Mateo Kovacic—who is struggling for game time under Zinedine Zidane—as “heir of Coutinho.”

Kovacic would certainly be a fine addition to Klopp’s midfield, but a move seems unlikely this summer.