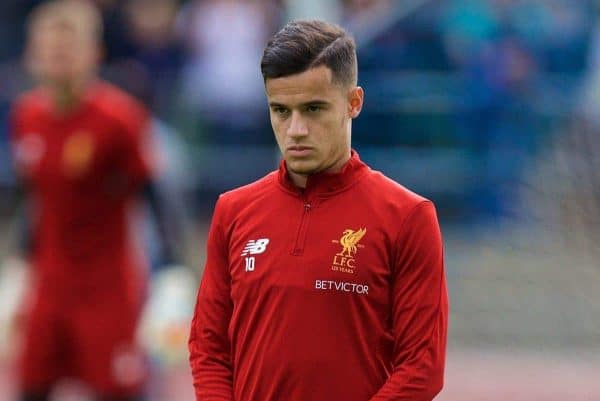 Emre Can has labelled Philippe Coutinho as “one of the best players in the world,” but insists Liverpool could move on without their wantaway No. 10.

Coutinho has missed the Reds’ first two games of the season with an alleged back injury, and is pushing for a move away from Merseyside.

The Brazilian formally requested a transfer ahead of Saturday’s 3-3 draw away to Watford in the Premier League, following two failed bids, worth £72 million and £90.4 million, from Barcelona.

Despite Liverpool remaining adamant they won’t sell their star playmaker this summer, however, there are still doubts over his immediate future.

Clearly lacking creativity in both the stalemate at Vicarage Road and in Tuesday night’s 2-1 win over Hoffenheim in the Champions League play-offs, Coutinho’s absence is detrimental.

But speaking after that victory at the Rhein-Neckar-Arena, Can insisted that the Reds would “go again” if the 25-year-old were to depart.

“[Speculation is] no problem for us, nobody in the team speaks about that,” he told Viasat Football.

“Of course, if Philippe stays with us everybody is happy. In my eyes, he is one of the best players in the world.

“But if he goes, if he wants to go, then everybody will wish him the best and we have to go again.”

Can played the full 90 minutes in Sinsheim on Tuesday night, adding to his 90 minutes at Watford, underlining his key role in Jurgen Klopp‘s squad.

Providing his assessment of the night, Can insisted that Liverpool “deserved to win,” having made it “difficult to play against us.”

“[I knew] it would be a difficult game, a tough game, and I think everybody knew that before the game and you could see that tonight,” he said.

“Hoffenheim is a very strong side, they want to play football but I think we did well today.

“I think we deserved to win, and if someone said 2-1 for us before the game, we would [take] that.

“We did what the manager expected from us, with all of our fast strikers we wanted to get the ball to them and [let] them go.

“We had a lot of opportunities to score, and defensively I think we did well, we stayed together, and it was difficult to play against us.”

There are still clear deficiencies in Klopp’s current setup, and the loss of Coutinho would only magnify these.

But following Liverpool’s midweek win, there is cause for optimism at Anfield.